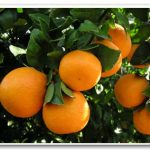 This is a story of The Little Tangerine That Could – a fruit that succeeded against great odds just as The Little Engine That Could made the unlikely climb up that hill in the book we read as children.

It’s the Pixie, a relatively new tangerine on the mass market. To get there it had to overcome economic disincentives, a habit of coming to fruit at the wrong time of year, inconsistent bearing patterns, and the skepticism of even those who helped give it life.

But now, just about the time the tangerine season seems to be winding down, along comes this end-of-season exclamation point – to my taste the most flavorful tangerine of all.

Tangerines are generally thought of as a “Christmas fruit”, available in markets from November through January or February. Pixies don’t come to harvest until March and they remain available until sometime in May or June, depending on the size of the annual crop.

Virtually the entire worldwide crop of Pixies is grown in the Ojai Valley – about 90 minutes north of Los Angeles – by some 41 family-scale farmers who have a total of about 25,000 trees. United under the banner of Ojai Pixie Growers, they meet once a week for coffee in downtown Ojai. There they share tips on everything having to do with raising a successful Pixie crop.

Today, Pixies are sold across the nation as well as online. Going to an early season baseball game at Yankee Stadium in New York? You’ll find Pixies on sale there. And they came from Ojai.

It hasn’t always been that way. According to the Ojai Pixie Growers web site, Pixies were developed by Howard B. Frost at the University of California Research Center at Riverside in 1927. The name of the developer alone could seem to be a hurdle for the tiny fruit, which is particularly susceptible to frost damage. The web site explains the Pixie is the result of open pollination of Kincy mandarins, which themselves are a hybrid between King Mandarins and a Dancy tangerine. From there it really gets confusing because there are hundreds of varieties of tangerines grown around the world.

Pixies are seedless; the skins may be smooth or pebbly; they are easy to peel; they run between 1 and 3 inches in diameter and the segments separate very easily. Pixies have a lower acid content than other tangerines. They are cholesterol and fat free and average about 50 calories each. All tangerines are high in potassium and fiber, are loaded with vitamin C and contain calcium and iron. Pixies are very high in sugar in the form of fructose.

What few Pixies as are grown elsewhere may not offer the same extraordinary taste as the Ojai natives because the fruit is very sensitive to microclimates. The Ojai Valley seems to be the perfect place to grow them. Even within that confined area, microclimates can be an issue from one part of the valley to another.

Pixies do not need to be refrigerated, but should be kept in a cool place. They taste better at room temperature. Like all citrus fruit, they should not be stored in plastic bags because plastic makes them sweat and that increases the likelihood of spoilage.

Pixies didn’t find a place in the commercial market until 1965, when the first trees were planted in the Ojai Valley. At the time, University of Riverside breeders recommended the trees for only “backyard fruit” for a host of reasons. The trees have a habit of bearing plentiful crops only in alternating years; it takes four years for a new tree to offer up any fruit at all and eight years for it to reach full production. None of this adds up to good economics for a farmer. So, for many years the fruit was eaten by the families that grew it or sold just at roadside stands in the Ojai Valley.

It wasn’t until the late 1980s that Jim Churchill and Tony Thacher got together and developed a plan to make Ojai Valley Pixies commercially viable. Churchill converted his run down family farm to Pixie tangerine trees; Thacher pulled out his avocado trees and planted Pixie tangerines in their place.

Retailers resisted the new fruit at first because it was “off season” for tangerines and these weren’t particularly attractive. But Churchhill and Thacher persisted. “It’s not how they look. It’s what’s on the inside that counts,” they said.

Along with Thacher’s daughter Emily, they hit the pavement and began selling at farmers markets throughout Southern California. Eventually Pixies started to show up on super market shelves. Success bred success and more and more acreage in the Ojai Valley was converted to Pixies. Now, the valley turns out some 1.6 million pounds of Pixies each year.

So, that’s the story of The Little Tangerine That Could. I wander through each tangerine season, trying this and trying that and never quite being satisfied. Then I give up and decide to wait until the calendar flips and Pixies arrive along with the legendary March winds.