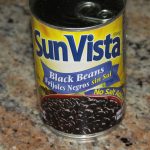 This recipe was born of necessity in August, 2008, about a month after a surgeon performed a quadruple coronary bypass to extend my life. The recipe has undergone several changes as the years ticked by, but the essence remains the same.

My post-surgical prescription included a low fat, low cholesterol, low sodium diet. When I asked how long that would last I was told it would be for the rest of my life. I thought I was doomed to eat cardboard forever.

Once I got past the shock, I set about adapting old recipes and creating new ones to meet the needs of my new life.

About a week after I came home from the hospital, two friends – Tracey Poirier and Samantha Stevens – brought me a gift basket filled with hope and liberation. Among the items in the basket were two cans of “no salt added” black beans. I didn’t know there was such a thing – high fiber, low sodium, in a can. Wow. Doors flew open and my imagination was set free.

Here’s a derivative of the first recipe I created using those black beans. This one is a younger sibling that saw the light of day for the first time just a few days ago. In addition to being quick and simple to prepare, it’s a great recipe if you are using portion control as one means to lose weight.

Make sure the chicken has a good coating of the oil and spices. Place the chicken on a rack and broil for 10 minutes at medium broil four inches from the heat source. Turn the chicken and broil another 5 minutes.

(Jennifer and I prefer chicken thighs to the breast. If you prefer the breast, go ahead and use that instead. You also could leave the skin on the chicken. But that would defeat the purpose.)

For the beans
Heat the black beans in a sauce pan. When the liquid starts to boil, mash the beans with a potato ricer. Add the spices and salt.

To serve
Put one-quarter cup of diced onions at the bottom of each of two bowls. Spoon the beans over the onions. Mix the beans and onions together. Put a chicken thigh on top of the beans in each bowl.