IN SUPER MARKETS AND RESTAURANTS, IT REALLY IS ‘BUYER BEWARE’ / marketing mavens are hawking unhealthful and mislabeled food 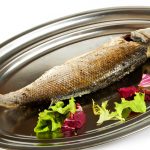 The marketing mavens of the American food industry exceed even themselves when it comes to shameless huckstering of mislabeled products and unhealthful culinary offerings. Nowhere do the words “buyer beware” mean more than they do in a super market, or on a restaurant menu.

One would think I would be immune to the “bottom line means everything” manipulations of the food market place by this stage of my life. But even as I approach the 76th anniversary of my birth, I’m still capable of being surprised and offended.

I was in a super market recently, a very high end super market in Sacramento, one famed far and wide for the quality of its offerings and the care it takes to assure customers will be provided with the best and only the best of everything all of the time.

There at the fish counter, attached to a slab of thick white fish was a card that read “Chilean Sea Bass / Argentina.”

True, Patagonia is a region of South America shared by both Chile and Argentina. But which is this – Chilean Sea Bass or Argentinean Sea Bass? Or neither? Patagonian Tooth Fish actually belongs in the cod fish family more than it does in the sea bass family.

Chilean Sea Bass is a trade name used in the U.S. and Canada. In Argentina, Peru and Uruguay it’s marketed at Merzula negra, which translates to Black Hake. In Chile it’s sold as Bacalao de profundidad. Bacalao translates to cod and profundidad translates to depth. So, we have deep water cod.

Chilean Sea Bass was a name created by a fish wholesaler who was looking for a way to make Toothfish sound attractive to an American market in 1977. Lee Lantz tried Pacific sea bass and South American sea bass before coming up with the Chilean moniker.

In 1994 for U.S. Food and Drug Administration recognized Chilean Seabass as a marketing name for Patagonian Toothfish and in 2013 for Antarctic Toothfish.

Two years ago regulators in Los Angeles County decided they had enough of the seafood bait and switch. Today, most markets in Los Angeles have yielded to the government directive and dropped the name Chilean Sea Bass. They still tend to label it as sea bass, however, instead of say Patagonian cod fish. As part of the same movement in Los Angeles, various other fish were have been given their proper names. What was sold as Red Snapper for decades now is labeled Pacific Rock Fish.

Super markets are not the only offenders. Restaurants everywhere have been able to sell bottom-feeding Patagonian Tooth Fish at hefty prices by listing it as Chilean Sea Bass for years. Many still do. I’m not sure why “Chilean” has any more cache with America shoppers and diners than would Patagonian or Argentinean.

It doesn’t stop with simply attaching fancy names to undeserving items. Things are no better when it comes to the healthful dining. They just don’t seem to care as long as the stock holders are happy.

In a Barnes & Nobel bookstore recently I saw a display of a cookbook titled “400 Healthy Recipes.” It was published by Good Housekeeping. The first thing I noticed was that the chicken in the photo on the cover had the skin on it. From my own post-coronary bypass surgery experience I know that isn’t very healthy. I flipped the book open to a random page. The first item on the list of ingredients in the recipe I saw was two slices of bacon.

While we’re on the subject of bacon, I’m sure you’ve noticed how this tasty item of smoked pork fat has taken over a corner of the food market. I heard a radio commercial for a local hamburger joint while driving through Oregon the other day. It offered “one pound of beef and half a pound of delicious cheddar cheese along with 14 slices of bacon” on a bun for the bargain price of just $20, including fries and a drink. A cardiology consult was not included.

I guess Starbucks isn’t making enough money with its over-inflated coffee prices. A sign in a Starbucks shop in Issaquah WA boasts “New / Double-smoked Bacon, Cheddar and Egg – Ingredients you can’t help but like.” There’s a photo of the sandwich on some kind of bun. Stress test and angiogram are extra.

Elsewhere in the same store was a sign boasting: “Now serving – COCONUT MILK – made from Sumatran coconuts.” Why are Sumatran coconuts any better than coconuts from any place else? Or, like fish from Chile, does it just sound more appealing? And has anyone stopped to consider that coconut milk is a real NO, NO for anyone with tendencies toward high cholesterol?

The list of examples goes on and on. If you pay attention I’ll bet you will see no fewer than 10 instances in any given day in which something is labeled as something it isn’t, something is sold as “healthy” when it isn’t, or stuff that is just a flat out health time bomb is dressed up to appeal to an already obese herd of consumers.

So, when it comes to pretty much anything related to food, it really does come down to BUYER BEWARE.