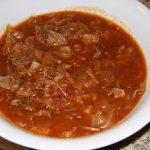 Few things in the culinary realm offer as great an opportunity for creativity as soup. And there are few things more inviting or satisfying than a bowl or two of steaming hot soup during the cool autumn and winter months.

Beef, chicken, fish, lamb, tomatoes, onions, leeks, lentils, navy beans, split peas, mushrooms, barley, potatoes, carrots, lima beans, greens – all these and more can be turned into great soups by home cooks. The only limit is the imagination of the person doing the cooking.

Much of my cooking is rooted in the Rumanian roots of my mother’s side of the family. But I also identify closely with my father’s side, the side that came to the U.S. from Russia. That’s probably the genesis of my affinity for Sweet & Sour Russian Cabbage Soup.

I don’t remember when I started cooking cabbage soup, or where I found the recipe that evolved through the years into the one I use now. Most likely it was something I clipped from a newspaper or magazine and then kept changing through the years until I got it the way I enjoy it.

I had been looking forward to cabbage soup for several months, so when it came time to make the season’s first pot, that’s where I went. A long-anticipated Sweet & Sour Russian Cabbage Soup was going to warm Jennifer and me as temperatures started to drop. As fate would have it, the temperature crept into the low 90s the day I decided to make this soup.

Jennifer tasted the soup the next night. She proclaimed it the best cabbage soup I ever made. “I swooned,” she said. When I tried a couple of bowls for dinner the next night, I found out what she meant. This is one terrific soup.

This recipe makes a lot of soup. Two bowls makes a very nice meal. You can do as we do and have it for dinner a few times during the course of a week, or you can freeze individual portions and alternate this one with some of the other soups in this series.

In a large stockpot, combine the tomatoes and water and bring to a boil. Rinse the flanken and soup bones well to remove any bone chips. Cut the flanken into sections of 3 bones each. Add flanken, soup bones, tomato paste, cabbage, salt, wine, lemon juice, cayenne and paprika to the stockpot. Stir to mix thoroughly. Bring to a boil. Reduce heat. Simmer covered 2 ½ hours. Remove soup bones and flanken. Discard the soup bones.  Trim flanken from bones and return the meat to soup. Let the soup cool. Skim any fat from top. Reheat to serve.

TIP: The flanken most likely will fall off the bones during cooking. It’s a good idea to count the bones as you put them in the pot so you can know when you have fished all of them out after the cooking is complete. Also, fish out the chunks of meat after the soup has cooled a little. Let the meat cook so you can handle it. Then break it into small pieces and return it to the soup.