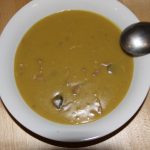 Want to know where to find the world’s best split pea soup?

Jennifer’s favorite vegetable is peas. Her favorite soup is split pea and her favorite split pea soup is the one I make at home from the recipe you will find if you continue to read this article.

Now, I try to avoid using the word ‘best’ and I try to keep it out of the writing we do here at Table Talk atLarrys.com and our sister web site – the restaurant recommendation web site atLarrys.com. I do that because to rank anything as ‘best’ would require too great a detailed recollection of all things similar that came before. How could I expect to name one Perfect Manhattan as the best from all the thousands I’ve sipped over the last 55 years? Or the ‘best’ veal piccata?

Anyway, back to the subject at hand. If Jennifer wants to proclaim my homemade split pea soup the best she’s ever tasted, who am I to argue. It’s her right and I will wear the honor with honor.

My mother used to make a very good split pea soup. It was second only to Navy bean soup on my father’s list of favorites and Mom didn’t make the bean soup. Mom made her split pea soup with flanken – a version of short ribs – instead of with ham, the way I do it.

I never saw mom use a recipe for her split pea soup, or most of the other things she cooked. It was just split peas, water, the meat and who knows what else. But it always turned out good.

From the time I was a kid I was fascinated by the very concept of split peas. Was there a factory someplace where armies of workers stood over table with knives they used to cut peas in half? I never really believed that, but it was an interesting idea. Of course, they could have used pill splitters bought at pharmacies. But based on how my pill splitter works on my meds, half of most of the peas would have been reduced to powder. I also suspected there was no plant on which pre-split peas grew.

So, from whence do they come?

As you probably suspected, the peas are round when harvested in their pods. The peas are removed from the pods and once dried the outer, dull-colored skin peels away easily. Left are the familiar dark green peas, each with its natural split exposed. As you also probably suspected, all this is done mechanically; no human hands need touch a pea.

Split peas can be yellow as well as green. But something about yellow pea soup seems unnatural to me. So, I stick to the green ones.

Split peas are high in protein and low in fat. They also are low in fat calories, with most of the calories coming from protein and complex carbohydrates, and they are very high in fiber.

So, split pea soup is not just delicious, it’s also healthy. Although some of the health benefits may be mitigated out somewhat by the addition of the salt from the ham. But consider: that would be the only measurable salt in the entire recipe. Even those of us on low sodium diets can deal with that.

Put the peas, ham and water in a large soup pot. Cover and bring it to a slow boil. Let it boil slowly for about 2 hours. Add the onions, celery, carrots and bay leafs and let it boil slowly for another half hour. With a slotted spoon, remove the ham and the bay leafs. Discard the bay leafs and let the ham cool on a plate. Add the garlic, cayenne and thyme to the soup. Blend the soup using a food mill, blender or emersion blender. Cover the pot and put the soup in the refrigerator overnight so the fat can congeal and be skimmed easily.

Strip the ham from the bones. Shred the pieces of meat and put them in a bowl. You want the pieces of ham to be smaller than bite size but big enough to be a noticeable presence. Discard the fat and bones. Cover the bowl and put it in the refrigerator until ready to use.

Two bowls of this makes a wonderful dinner. If you can find some good, dark pumpernickel bread at a bakery, that goes well with pea soup. But don’t fall for the commercial, super market bread. No bread at all is better than poor bread, and this is a very filling soup, so the bread, while a nice addition, is not necessary.

After enjoying the soup the first might, it’s a good idea to apportion the rest into individual servings for future meals so you don’t have to heat the entire pot each time. This soup freezes very well. It also will keep very well in the refrigerator for a few days.

VARIATIONS
My mother made her pea soup this with flanken instead of ham. If you do this be sure to wash the flanken well first to remove any bone fragments and count the number of bones you put in the soup so you can know when you’ve fished all of them out later. If using beef instead of ham you are going to need to add salt to replace the salt you won’t be getting from the ham. Figure you’ll need about 2 pounds of flanken.

Jennifer’s second favorite split pea soup is what is served at the two remaining Pea Soup Anderson’s restaurants in California. That soup also is sold in cans. This one is vegetarian. It’s very, very good. But if you want to do aa vegetarian version at home you are going to need to add a fair amount of salt and thyme for flavor. You also may want to increase the amount of carrots and cayenne. You’re going to have to keep tasting it until you get the flavor you want.