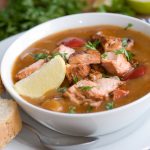 My mother used to make the best fish soup I’ve ever tasted – not chowder; it was actual soup. But she left no recipe. I don’t know what she used to flavor it, or what kind(s) of fish she used. I do remember it was tomato based and there were no pieces of fish in the final product, just fish that had cooked apart. As most of the fish served at home was either eastern cod or flounder, I suspect that might have been what she used in the soup.

Through the years I’ve eaten many different fish soups in many different restaurants throughout the world. Most were enjoyable. But none matched the flavors mom presented.

The mystery of it is that mom was not known for keeping much of a selection of herbs or spices, nor was she known to prepare any homemade broths that might have been the base for her soups. So, it seems the secret to her fish soup – always served with a generous bowl of oyster crackers – probably is lost forever.

I thought about all this recently as I roamed my favorite local super market in search of an inspiration for dinner. While I was searching, the inspiration found me. I would make a fish soup of my own. It would be fun, something I never before had done. We were having a few days of actual winter in Los Angeles and soup sounded like the perfect reply.

But what kind of fish soup? It had to have tomatoes because mom’s fish soup was tomato-based, although I suspected she used tomato sauce or crushed tomatoes out of a can instead of fresh tomatoes. Most likely it was canned crushed tomatoes run through a mill. But I couldn’t be sure.

So, I bought a nice sized, out-of-season, red heirloom tomato. The notion of some diced potato to thicken the soup passed through my mind and was shoved aside. I would use rice instead. I would have liked some chopped celery, but Jennifer doesn’t like celery. So, it would be diced onion, sautéed to soft. Oh, yes. Must have some diced carrots. Mushrooms? No. The flavor would be distracting. For the soup I would use my homemade fish stock. A good bet that was something Mom never had.

Now the key decision. What kind of fish? Salmon? No, we have that frequently and the taste would be too dominant. Sole? Too thin. It would fall apart in the cooking like Mom’s did and I wanted actual pieces of fish in mine. I don’t like sword fish prepared this way. Rock fish (previously known as snapper). Again, kind of thin and while it’s firmer than sole, it still would cook too quickly and fall apart. Tuna/ahi. Wrong flavor for soup. Chilean sea bass (actually Patagonian tooth fish)? Don’t even like that and it’s too oily for a soup. Same for black cod; even though we each like it, it’s too oily, it would melt in the hot broth.

The longer I looked the more obvious it became that it was going to come down to halibut. Now, I don’t like warm water halibut from southern waters. The only halibut I’ve ever eaten that I enjoyed was from Alaska. And the only way we can get that in Southern California is frozen, or previously frozen. I find that turns dry if I try to bake or broil it. But this would be different. It would be in a soup, cooked quickly in hot liquid. I decided to give it a try. And I decided to add some shrimp for a different taste and texture.

It all turned out well. Two bowls of fish soup for each of us with some crusty bread. Here’s how I did it.

Heat the olive oil in a wide frying pan. Add the onions and sauté until soft but not browning. Add the stock, tomatoes and carrots. Cover and cook at a slow boil for one-half hour.

In the meantime, cook the rice in a separate pan according to package directions.

Add the salt, pepper, tarragon, oregano and pepper flakes to the broth. Cover and simmer for 15 minutes. (If you have the time you may simmer a little longer to meld the flavors even further.) Taste and adjust flavors if necessary. Stir in the cooked rice. Add the halibut and shrimp. Cover and cook on a slow boil for five minutes.

Ladle into bowls and add a squire of lemon.

Serve with a crusty French bread or sourdough bread.

You may use tobasco sauce instead of the red pepper flakes if you wish. Or you can skip the spice if you don’t want the heat.

It’s a good idea to add just half the shrimp and halibut for the first bowl of soup and then add the rest later for the second bowl so it doesn’t get overcooked.