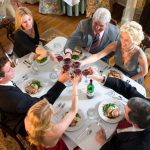 “Thank you for including us. People don’t do this anymore.”

So said one of our guests at the end of a dinner party Jennifer and I hosted at our home recently. I thought about it after and realized to a large extent she was correct. People don’t seem to do intimate in-home dinner parties as frequently as they did in earlier times. The custom hasn’t vanished completely, but somewhere along the way, social dining shifted from the home to the restaurant. And that’s a shame.

We were four couples – Jennifer and me and some friends. None of the others knew each other before that night. The only thing that linked them was they each knew me and Jennifer.

Yet it was a wonderful evening of food, wine and conversation, worth every second spent preparing and cooking and every ounce of effort that went in the post-party cleanup.

There was a time when dinner parties were part of our social fabric. Whether it was two couples getting together at one of their homes, or several couples, the concept was the same. And most often the host did the cooking.

Jennifer and I hosted such events with some regularity before I had my quadruple coronary bypass surgery in 2008. I loved doing different ethnic themes – Polish, Russian, Jewish, Italian, Japanese, Tapas and others. These were separate from the big holiday dinners that brought as many as 21 family and friends to our home.

I took a break after the surgery, when my healing sternum wouldn’t stand the physical stress of such an event. And for some unknown reason, six years later we still were on hiatus. Even after I was healed and back to playing golf and traipsing up hundreds of stairs while on vacation in Cornwall, and lifting heavy items, and cooking dinner night after night for the two of us or for our sons and their families when we would visit, the dinner party continued to elude my focus. Until somewhere early last year.

“I miss our dinner parties,” I told Jennifer.

“They’re too much work and we don’t have the stamina we used to have,” she answered.

I didn’t agree. I knew I still could cook for eight people, help with the setup up before hand and handle the cleanup after if that’s what it took. I might have to re-think the menus to allow more rest and breathing time. But the satisfaction of the whole thing was worth it and if we planned it right the conversation could turn out stimulating enough. I was going to do it.

STEP I – I made a list of potential guests I might want to invite to a dinner party in our home and I tried to arrange them into likely combinations. Many people seemed to work well with virtually anyone else on the list. Some seemed to fit more narrowly. Soon, I had two groups of three couples each that seemed logical for the first and second dinners.

STEP II – I made a list of potential menus. For each one I entered the names of potential guests for that menu. I wouldn’t want to invite the meat eaters to a fish dinner. Vegetarians would have to be meatless and fishless.

STEP III – I matched the menu list to the two groups I had selected to see which menu would fit best with each of the guest lists. Once I had that done, I simply decided which menu I wanted to prepare first.

STEP IV – I phoned each of the potential couples and offered a choice of three possible Saturday nights. One couple was not going to be available for any of those nights. So, I substituted in another couple. I quickly knew which night would work for everyone and we were set to go.

So much for the most difficult part of the event. Not even the best food in the world can rescue an intimate, in-home dinner party if the guest list isn’t right.

This was going to be an Italian dinner. The main course was going to be pollo vin santo – chicken in a sweet wine sauce. I had made it for a friend’s birthday dinner several years before, lost the recipe, and recently re-discovered it. This was an entree that could be prepared ahead of time and heated just before service. Perfect for pacing the day. I was going to serve it with a side of artisan Farfalline (pasta) in olive oil with garlic.

COCKTAILS
I like to allow about 45 minutes to an hour for cocktails. Prosecco or Champagne create a party atmosphere from the start and set the stage for the wine that will be served with dinner. The munchies should kept lite. As tempting as cheese and crackers may be, cheese is too filling to offer before dinner. Mixed nuts work well, either by themselves or with some mixed olives. With the right grouping of people this is all that’s needed. Let the conversation carry the moment.

PRIMI
From my favorite Italian deli for each person I got one slice of mortadella, one slice of some other Italian meat, one marinated artichoke heart, and one sweet red pepper stuffed with ricotta cheese. Roll the mortadella into a tube and arrange it on a plate along with the other items. The second meat item can be anything you want – salami, capicola, bresaola, coppa …

Do this ahead of time. Wrap the plates with plastic wrap and refrigerate until about one hour before your guests will be seated. Set the plates at each place at the table before the guests arrive. It makes the room look festive and welcoming.

Some crusty Italian bread or garlic bread can be served with this.

This is when I turned to some 12-year-old bottles of Barolo.

Heat the oil in a wide frying pan. Season the chicken with salt and pepper. Brown the chicken skin side down over medium-high heat. You may need to do this in two batches.
Remove the chicken to a plate. Saute the onions in the frying pan for about 5 minutes, until they start to turn golden. Stir in the white wine and cook until it’s evaporated. Return the chicken to the pan. Cover the pan and let the chicken simmer in its own juices over medium-low heat for 15 minutes.
You can do this well ahead of time and put the covered pan in the refrigerator. Take it out to get to room temperature about one hour before the guests are due to arrive. When the guests have arrived put the pan on the stove over a very low light to re-heat the chicken. When it is re-heated – about the time you sit down for the first course – uncover the pan, add the vin santo and simmer for 15 minutes, until the chicken is cooked through. Garnish with the parsley and serve.

Pasta side dish
Buy one pound of something like an artisan farfalline pasta. Cook it according to package directions. Heat one-quarter of a cup of extra virgin olive oil in a wide pan. Stir in six cloves of chopped garlic. Spoon the pasta directly from the water into the olive oil. Toss the pasta to coat with the oil. Stir in one table spoon of crushed dried basil.
Serve on the plate with the chicken.

HINT: Pre-boil the water, then turn the light to low to keep the water warm. About 15 minutes before your guests will be sitting down at the table, bring the water back to a full boil and cook the pasta while you are eating the first course. The pasta should be done in 7 to 10 minutes, depending on how you like it.

Stick with the Barolo for this course.
DOULCI
Biscuit Tortoni (you can do this the day before or first thing in the morning)
3 eggs
½ cup of sugar
1 cup of heavy cream, whipped
½ cup of crushed coconut macaroons or almond cookies
½ cup of chopped toasted almonds
2 Tbsps sweet sherry
2 tsp vanilla extract

Beat the eggs and sugar in a mixing bowl until light and lemon colored. Fold in the whipped cream, ½ cup of crushed cookies, the almonds, sherry and vanilla. Spoon the mixture into dessert cups. Spring the rest of the crushed cookies over the top. Cover with plastic wrap put the cups in the freezer until firm.

There you have it. Great food that will show off your skills as a cook without wearing you out. And it will leave you free to chat with your guests over drinks before dinner. You may have to dash back to the kitchen occasionally, but you won’t be marooned there while everyone else is getting acquainted.