MEALS OF THE YEAR / atLarrys.com co-hosts celebrate the year gone by 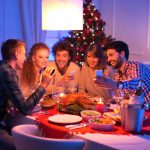 It takes more than just wonderful food to make a truly memorable meal – one that can qualify as a Meal of The Year. There’s the company, the conversation, the location, the occasion, the ambiance, and dozens of other factors that combine to set one meal apart from all the others.

Food, restaurants, the family dinner table … these are things of bonding and making memories to texture a relationship and a life. All these things are reflected in the meals selected as Meals of The Year by five co-hosts of our sister website – the restaurant recommendation site atLarrys.com. In alphabetical order here is what they had to offer:

Co-host JEFF DAAR – an attorney with offices in the San Fernando Valley and downtown Los Angeles.

“I have had many meals and wine events that could qualify in different ways as a Meal of The Year for 2014. These include a fabulous dinner with fugu in Kyoto, gourmet haggis at a whiskey society in Edinburgh, some amazing southern regional barbecue, and spicy miso ramen.

“With many great meals from which to choose, the one that stands out is a recent one at a friend’s home for a special occasion. Our friend brought in a chef to prepare food for a small group focused around lots of amazing wine. What was spectacular was not necessarily the food but the intimacy and casualness of having food prepared by a private chef to accompany many standout wines in someone’s home. Grade 5 Japanese Wagyu with lots of shaved white truffle was, for example, an appetizer.”

Co-host LARRY LEVINE – editor and publisher of this online food magazine as well as the restaurant recommendation website atLarrys.com, a veteran of more than 45 years as a political consultant, and a former news reporter and editor.

“It was lunch at Rule’s Restaurant on Maiden Lane in Covent Garden, just steps from the London Opera House and the theatre district. It’s the oldest restaurant in London. The Red Coats hardly had finished licking their wounds from the defeat at the hands of the Colonists, when Rule’s opened in 1798.

“Rule’s is everything you would expect from an elite restaurant. An elegant room. A uniformed doorman out front. Excellent food and the wine – a 2009 St.-Emilion Grand Cru by the glass.

Co-host KATHLEEN POIRIER – a lead broiler at Ruth’s Chris restaurant in Beverly Hills, who recently moved to the new Marina Del Rey location to fast track her training as a sous chef.

“My most memorable meal of 2014 was when I made more than 200 enchiladas to feed my family and a friend who had recently lost a father. I fed more than eight people with one day of preparation.

“It gives me great satisfaction to use all the ingredients, with very little waste, as well as producing a product that’s even better after recooking. I feel flavors that have more time to come together, like day-old spaghetti sauce, really come alive after a few days.

“Feeding people is what I do on a daily basis, but doing it on a personal level in my own kitchen is when I truly realize why I chose this career. I love making people happy with comfort food and I promise as an aspiring chef I will never move away from that.”

When asked for the recipe for the enchiladas and how 8 people could eat 200 enchiladas, Kathleen said, “I froze half the enchiladas for future meals. Unfortunately, no recipe. I just winged it.”

“I rarely pass up whole roasted bone-in fish on a menu. Honorable mention for 2014 goes to several able contenders – the fire roasted whole branzino at Sens in San Francisco and the crispy skinned sea bass with five Latin sauces at Rivera near L.A. Live in downtown Los Angeles among them. But the champ for 2014 by far was the whole, wok fried opakapaka (Pacific red snapper) at Mala in Lahaina, Maui.

“The food: a fresh local wild caught snapper, seared crispy and covered in a ginger, garlic, black bean sauce, shitake mushrooms, tomatoes and snap peas. The skin is scored before frying, making it simple to maneuver around the bones using chop sticks.

“The setting: an outdoor deck with my wife Judy, a few paces away from the ocean, mild evening and a soft sunset that would make even an ardent atheist feel divine.

“The place, the food, the company. Three ingredients for a most memorable meal.

Co-host ROD WRIGHT – former member of the California State Senate and Assembly, he earned his Bachelor’s Degree in Urban Studies and City Planning.

Rod is a gourmet chef who doesn’t hesitate to tackle a dinner party for 50 people. Among his ideas of a good time is planning a menu, ordering the food and wine, and commanding a kitchen crew to help with preparation, service and clean up, And while he’s at it, he photographs the whole thing for an album he keeps of dinners he’s prepared. Here’s the menu for a dinner he prepared for 50 people at the home of a friend in Sacramento:

Interesting assortment? Five people, who are dedicated diners – sincere foodies … people who spend substantial portions of their lives in restaurants … and three of them list meals eaten at home as their Meal of The Year – 2014.