IT STARTED WITH A MUSHROOM / Teriyaki chicken recipe 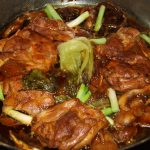 It started with a shitake mushroom grown in a “farm” given to me as a gift.

Next thing I knew, I burned a sauce pan while making a homemade Teriyaki sauce, which spilled over on the stove top and caramelized.

Then I had to run out to the market to get another bottle of Aji-Mirin because I was out of it.

In the end it all worked out and we had a very good Teriyaki chicken dinner. I posted something about this on Facebook under the heading of Kitchen Disasters a few days ago. It was accompanied by a photo of the final product.

Almost immediately I started getting emails from people who want the recipe.

For one of my Hanukkah gifts son Lloyd and daughter-in-law Edie bought me a “farm in a box” with which to grow my own shitake mushrooms in the house. Within days of setting it up, I had 40 mushrooms in a brown paper bag in the refrigerator and had to figure out what to do with them.

Something Asian seemed to make sense – Chinese or Japanese.

With 30 mushrooms still in the fridge, I decided to go for something Japanese instead. That led to an urge for Teriyaki chicken. I put the ingredients for my homemade Teriyaki sauce in a sauce pan and forgot it was there until I smelled it from the living room. By then it had boiled over, burned the bottom of the sauce pan and decorated the stove top with a frightening looking, caramelized, gooey substance. Jennifer jumped in to help with the cleanup.

I was out of Aji-Mirin. So, down the street I fled to the 99 Ranch Market – a nearby Chinese market.

Back home, I put up another pot of homemade Teriyaki sauce. This time I stood by and waited for it to start to boil. I turned down the heat and stayed there while it simmered for five minutes. It was only after I shut the light and moved the pan off the burner to cool that dared to leave the room.

Put the first three ingredients in a sauce pan. Stir the sugar well. Bring the mixture to a slow boil, uncovered. Add the ginger. Turn down the heat and let the sauce simmer for about 10 minutes. Stir occasionally. Remove the sauce pan from the heat and allow the sauce to cool.

Remove the chicken to a carving platter and cover with tin foil for about 5 minutes.

NOTE: I do this sometimes without the bok choy and serve the chicken on a bed of rice.