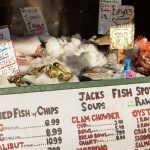 Sounds like this Jack fella is quite the enterprising proprietor of a bustling chain of restaurants, doesn’t it?

Fact is all four of these names are attached to the same spot on Pike Place, across the street from the famed Pike Place Market in Seattle WA.

No, this is not the home of the famed salmon throwing and catching that amuses tourists. That’s a fish store inside the sprawling market. To reach multi-Jack’s turn right just before entering the actual market, at the bottom of the hill, where Pike Street turns right and the name changes to Pike Place. Jack’s is just a short way down on the right.

At first it can look like any of a dozen other fish markets in the Pike area – large, meaty, fresh salmon staring one-eyed up from a bed of shaved ice; mussels, clams, oysters and crabs on ice; other fish on offer depending on the season, all right there to be viewed and inspected from the sidewalk.

Venture behind the fish displays and you’ll come upon a couple of high time, metal counters with high bar stools. And behind that is the steamy, fragrant, busy and very small area in which food is being prepared to order for service at an atmospheric eat-in or take-out restaurant.

There are other very good restaurants in the area. Etta’s, a few blocks further along Pike Place, is an indoor, sit-down restaurant with a more extensive menu for lunch, dinner and brunch and open for breakfast on the weekend. Elmer’s, also a short way down on Pike Place, does a busy breakfast business and dishes up some nice fish and chips the rest of the day.

But it’s Jack’s that draws me back on my frequent trips to visit family as short way outside of Seattle. We’ll drive the 20 or 30 minutes from nearby Issaquah, brave the tight parking situation, pay over-priced parking fees typical of a tourist area just for the reward of lunch at Jack’s. And yes, the gasoline and parking often costs more than we pay for lunch for Jennifer and me.

Why would we do that?

Can we say “perfect clam chowder?” I mean really perfect, with plenty of clams and nice bites of potato to thicken the soup.

Can we say “perfect fish and chips?” Not the heavily breaded, soggy fish and chips you’re likely to find elsewhere, but juicy slices of local cod fish inside a thin, golden and crisp batter.

Can we say “fresh and seasonal local oysters in the half shell and steamed clams and mussels?”

And can we say “plenty of atmosphere?” Sit at the counter facing the cooking area and you can chat with the busy “cooks” while they work. You can talk about the source of the oysters, the recipe for the chowder, the history of the place, your hometown and that of the cook, or just about anything else. Sit at the other counter, facing the fish displays and the street and you can watch the passing foot traffic and shoppers. Even on cold and rainy days, which are too be expected most of the year, it’s still a treat. The ambience is reminiscent of the Oyster Bar at Grand Central Station in New York, although that place is indoors and warm and cozy. But it’s the same kind of delicious seafood with the same kind of pass-through traffic.

Our routine at Jack’s generally starts with a large – 16-ounce – portion of the chowder. Yes, it really is too large unless it’s all you are going to have. But I do it anyway because I know it will be at least a few months before I get to eat it again. Then we order the large portion of cod fish and chips to share. That’s five pieces of fish on a nice bed of French fries. It adds up to a hefty lunch for two people who love to eat but are trying to control their weight.

As for the multiple names … all are the product of Jack Mathers, a Seattle native who has been in the fish business locally for some 25 years after having working on fishing boats in Alaska and fish processing plants. His “Spot” has been located at the Pike Place Market since 1982 and most days you’ll find Jack there himself, tending to the needs and desires of loyal regular customers and a parade of tourists.

Go online and look for Jack’s and you’ll be lead to Jack’s Seafood Spot. At various places at the actual location, however, you’ll find signs proclaiming each of the four names. It’s all part of the charm and informality of the place.