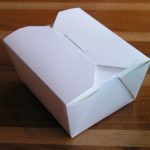 You know what happens to most doggie bags, the ones that aren’t left behind on the table when you leave the restaurant?

They go in the refrigerator as soon as you get home, stay there for a couple of days and then get thrown away. At least that’s how it works at our house. Jennifer and I have been big eaters and leftovers were a foreign concept for us until recently. Then we each decided to lose some weight and turned to portion control as a key device.

One recent morning Jennifer asked if I planned to go to the market to pick up something for dinner. She asked just as I opened the refrigerator door to get out the soy milk I would use for our breakfast oatmeal. There looking back at me was the bag with the leftovers from Jennifer’s steak dinner at Panzanella two nights earlier.

“Are you going to eat this piece of steak for lunch?” I asked.

She said “no” and I was within a second of saying we probably should toss it. But I turned on a dime. “I’ll use it for something for dinner,” I announced.

What a great way to start a day. I spent bits and pieces of the next couple of hours noodling around what I was going to do with the small piece of steak and some leftover spinach. Here’s the result:

Slice the steak across the grain into thin slices.
Make an onion and mushroom gravy –
Heat the olive oil in a frying pan. Add the onions and sauté until soft and just beginning to brown. Add the water, cover the pan and simmer over medium-low heat for 15 minutes. Check occasionally and add small amounts of water if needed. Add the mushrooms and sauté until golden brown. Sift the flour over the mushrooms and onions. Stir and let the flour cook over medium-low heat. Stir occasionally and continue cooking until the flour is browned, about 10 to 15 minutes. Add the beef stock into the pan, one-half cup at a time. Stir after each addition of stock to allow the stock to thicken. When all the stock is in the pan, add the salt, pepper and fines herbs. Cover and simmer over low heat for 15 minutes, stirring occasionally to prevent sticking to the bottom of the pan. Add the steak in a single layer. Cover and let the steak heat through, about 10 minutes.

To serve: Toss the steak slices into the gravy. Spoon a mound of mashed potatoes onto the middle of two plates. Lay pieces of steak around the mound of potatoes. Spoon the gravy over the steak and the potatoes.

Depending on how much steak you brought home from the restaurant, these could be fairly small portions, as in portion control.

I reheated the spinach by sautéing it in some olive oil for a couple of minutes Spinach is a good accompaniment for this dish, so if you don’t have any leftover you may want to buy some at the market and sauté it in olive oil with some chopped garlic.

So that’s how my day began and ended. I guess it really began two days earlier, when Jennifer ordered steak for dinner and didn’t finish it. Portion control is an important tool in the drive to drop some pounds.