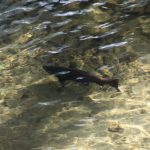 It’s time for a seasonal salmon lesson from our friend Jim Oswalt at Gemini Fish Market in Issaquah WA.

I’m writing this at Burbank Airport as I await my flight to Seattle for a weekend with my son John, daughter-in-law Julie, granddaughter Ella and grandson Miles. They live in Issaquah and we will be attending the annual Issaquah Salmon Festival this weekend. What began as a local celebration of the salmon returning up Issaquah Creek to the hatchery where they were born has now grown into a huge event that draws upward of 150,000 people from throughout the region. That’s quite a load on a city of 17,000 people 20 minutes southeast of Seattle.

A problem, as Jim points out, is that the festival puts everyone in the mood to eat salmon at the worst time of the year to eat salmon.

“These fish are all returning to the fresh water to go make babies, which you’re all gonna eat all summer long in three to five years,” Jim says. “But when the fish hit he fresh water, they stop feeding and their fat supply is what feeds them. So, they lose oil content and the meat firms up. They will not be the nice, oily, flaky fish you have been used to eating all spring and summer.”

Jim says he will be selling King and Coho salmon “that will be the best you can find and they will be incredibly fresh. They just won’t have that creaminess you’re used to with the troll King salmon.”

Regular readers of Table TalkatLarrys.com know I consider Gemini Fish Market to be the best fish store at which I ever have shopped. If we lived in Issaquah we probably would eat fish four or five times a week. I’m hosting a dinner party at our house in Los Angeles in November and I plan to have Jim ship some fish south for that event. I’m just not sure what he will recommend for mid-November.

As for what all this means to you when you shop for fish at your local market, you can bet when it comes to flavor and texture it will be no better than what Jim is selling, and most likely it will not be as fresh. Unless you live in the Pacific northwest, or you are willing to eat artificially-colored, farm-raised salmon, or you just are not that particular, you may want to consider something more seasonal for the next few months.

Jim says, “My suggestion with these off-season salmon would be to jazz them up a little. Normally, I’m a minimalist when it comes to salmon. But because of the lack of oil content, I suggest marinating or using a nice sauce on these fish. They’re gonna taste great but you want to help keep the moisture in. I really like to use mayo or sour cream pastes on these fish when I prepare them and you can bake, grill or broil. Dill sauce and umami are great for spreading over the fish and throwing in the oven. Just take a little extra care to not overcook.”

Jim says he will be getting frozen-at-sea Sockeye and troll-caught King by next week, unless “something weird happens and we get some fresh trolls out of Canada.”

Either of those would be a compromise for those accustomed to ocean-fresh spring and summer salmon. But if you don’t live in the northwest, it probably would be better than most of what you can get in the markets.

Come October 11 the Alaskan winter troll fishery begins. “We should be into some of the finest salmon known to man if the season is decent and the weather cooperates,” Jim says.

Jim expects to have access to the Alaskan troll-caught but warns, “They do get few and far between. So, the price can get pretty crazy.”

And therein may lie the answer to the menu questions for my November dinner party – just have Jim ship a couple of pounds south.

In the meantime, Jim says it’s an extraordinary season for Alaskan king crab and the Dungeness crab season is just beginning.

(NOTE: The salmon in this photo was swimming and spawning in Issaquah creek the afternoon of Oct. 3, 2014.)