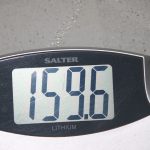 Sue Treadwell of West Sacramento is the winner of THE WEIGHTING GAME. She guessed my weight would be 159.1 pounds the morning after I returned home from a three-week vacation in England.

She missed by one-half pound. My actual weight the morning after we returned was 159.6.

THE WEIGHTING GAME asked readers to guess how much I would weigh the day after I returned from the vacation.

Sue works for a firm that finds homes for international students studying at University of California at Davis. She retired in 2012 after working at her local fire department for 21 years. She is married and has eight grandchildren.

First prize in the contest was a choice of a $20 coffee card for either Starbucks or Coffee Bean & Tea. Sue has selected Starbucks. She calls herself a Starbucks fanatic, who “must have my tall half-caf whole milk latte every day.”

Second closest to guessing my return weight was public opinion polling veteran Gene Bregman, who was 1.2 pounds off at 160.8.

53 people submitted guesses. Low guess was that I would come back at the same weight at which I left – 157.2.  Highest guess was 164.2 pounds. The overwhelming majority of guesses had me gaining three pounds or less.

I think the key to the weight control was the amount of exercise I got. I was fairly free with what I ate. But I went out of my way to walk whenever I could, particularly up flights of steps.