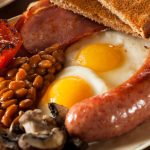 Full Cornish fry ups four straight days at St. Ives … Now a full English fry up first day at Angmering Manor, a 16th century building and former convent now converted to a hotel. We’re here for a week. And they don’t serve much of anything else for breakfast. There’s an assortment of cold cereals and some sliced fresh fruit on a communal table.

I left home promising to have just four fry ups in the three weeks of our vacation – one at each of the hotels or B&Bs at which we would stay so I could sample different types of sausages from different regions of England.

I would do that in the name of American foreign relations, my duty as an ambassador from the U.S. and for the sake of respect for the culture of others. After all, what could be more culturally British than a banger?

But the reality is that they got me. Regular readers will be aware of my proclivity for sausages. Of all the things my doctors put on the off-limits list after my quadruple bypass surgery six years ago, sausages are among the greatest challenge. At home I allow myself a couple of sausage sandwiches each month at Brats Brothers in Sherman Oaks. Two or three times a year I’ll do an Italian sausage and onion sandwich for dinner at home. On the rare occasions that I have pizza it will be with either sausage or it will be Margherita, no meat.

But I’m in Great Britain, where sausages are an institution. I have an obligation. Besides, with the time difference, my cardiologist will always be asleep in L.A. while I’m having breakfast and maybe even lunch over here, depending on what time she gets up in the morning.

Ask yourself: would you go to Japan and not eat sushi, or at least tempura? Of course not.

Would you visit India and shun curry? Of course not.

Would you spend time in Australia and not taste the local roo? Of course not?

Would you return from Chile having passed up the local wine? Well, maybe that one.

So far on this trip I’ve sampled at least three different types of regional sausages and one unique, homemade specialty of a B&B. They’ve come in varying thicknesses and lengths and been composed of various ingredients.

At our first stop, the Berry House B&B in Littlehampton on the south coast of England, the sausage did not fit any regional mold. It was produced by a local butcher according to his own private recipe. I had one for breakfast the first of the three days we stayed there. It was a solid effort with a definite touch of that almost menthol flavor often found in patty sausages in the U.S. I would have had more the next two days were it not for my still-kept promise to limit myself.

Next stop was Boscastle in Cornwall, where we stayed at the Old Rectory B&B. Again, a decent sausage but not distinctive to the region. At breakfast here the English bacon was superior to the sausage, which I had only on the first of the three days we were there for the same reason as I limited myself at Littlehampton.

Breakfast at the Primrose Valley Hotel in St. Ives, also in Cornwall, gave us our first taste of a true regional sausage – the Chipolata. This one derives from France. It’s a lot thinner and a bit longer than other British sausages we have encountered through the years. They usually are made from pork and onions and seasoned with salt, pepper, herbs and spices that may include sage, thyme, pimento, or nutmeg.

Cumberlands are another British sausage standard. These are rolled in long, flat coils. The meat is pork but the dominant flavorings are black pepper and white pepper. Unlike sausages from any other region, these sometimes are coated in bread crumbs before cooking. The distinctive feature of Cumberland sausages is that the meat is chopped, not ground or minced. No preservatives are used in true Cumberland sausages.

Lincolnshire sausages get their flavor predominantly from the herb sage. There also may be parsley, thyme, or onion added to the coarsely chopped or ground pork. Bread crumbs are used as a binder. A Lincolnshire sausage may contain some sulphites and still qualify for the official designation as a Lincolnshire. There is no standard width or length to a Lincolnshire as there are for Chipolatas and Cumberlands. Lincolnshire is unique in its production of meat-free, vegetarian sausages, heavily flavored with sage.

The town of Newmarket in Suffolk turns out three varieties of sausages. All are sold as Newmarket Sausage. The differentiation is in the names of the producers. All three are distributed widely throughout the United Kingdom under that name of Newmarket sausages and a consumer needs to be alert to the differences. Each is produced with pork and each of the three producers claims a secret combination of herbs and spices. Newmarket sausages tend to be spicier than most other British sausages.

Which brings us to the most famous of all British sausages and my personal favorite – the banger. My father refused to eat hot dogs that were not all beef. He shunned those that contained fillers like cereal or bread crumbs to stretch the meat and increase the profit margin. I follow his example to this day.

But when it comes to bangers, the fact that bread crumbs is a required filler doesn’t bother me one bit. Without filler it isn’t a true banger. I love the flavor and texture of a banger more than any of the other British sausages. I’ll eat them for breakfast as part of a full fry up and I’ll eat them for lunch or dinner as bangers and mash. I’ll eat them plain on a plate or in a sandwich, with or without grilled onions.

What I won’t eat is what is sold in U.S. markets as “British style bangers.” They aren’t bangers. They don’t look at all appealing and they don’t resemble anything even close to a banger in flavor or texture. If I’m in an English restaurant in the U.S. and bangers are on the menu I’ll ask for the pedigree before ordering. If they aren’t imported I’m more likely to order shepherds’ pie.

I haven’t tried it yet, but here’s a recipe I found that sounds credible for homemade bangers.

Mix everything together thoroughly. Stuff it into a sausage casing tied off in lengths of about 4 inches. Separate and grill as needed until done.

IMPORTANT WARNING: Before cooking the bangers prick them in a few places with the point of a knife. My British wife and relatives recall having pricked the bangers with a fork when they were growing up. WHY? So they didn’t explode. Reliable reports regarding the origins of the name of these wonders – bangers, instead of sausages – have to do with the influence of two world wars that created meat shortages. To help stretch the meat, grains and liquids were added. This created a tendency for the sausages to burst their casing when cooking – a serious problem for home cooks as well as soldiers in the field. The little devils actually would explode – BANG. Thus: BANGERS. The name stuck even after some wise person figured out a little pricking would prevent the problem. And even today a British cook, and some of the rest of us non-Brits, still are banger prickers.