NOTES FROM THE FARMERS’ MARKET 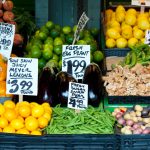 I stopped by the farmers’ market in Studio City this morning. It had been quite a while since my last visit, what with our recent trips to England, San Francisco, Sacramento, and San Diego.

For the last year most of my produce shopping occurred at the super market and I was growing increasingly discontented. Even at our top-of-the-line market it was clear the word “fresh” was past tense.

When we returned from England one week ago today, I vowed to reinstate Sunday mornings as farmers’ market time to the extent possible.

Here are some observations from this morning’s visit:

1. There are more varieties of squash on the counters than I remember from past summers. But a few old friends like the yellow or green patty-pans were nowhere in sight.

2. The anti-corn crusade seems to have had an impact. Only a very few stands even offered corn and, where there used to be tables loaded with both white and yellow corn, the corn now is relegated to less visible display areas. If you want corn you have to look for it. That fine with me. If I want corn I go right to the farm not far from home.

3. I found more varieties of peaches than I recall from the past. However, most of them didn’t have that great fresh peach smell when I held them to my nose. Perhaps it was because they were being overpowered by the smells sausages, tamales and other hot foods on sale just a few yards away. I bought some old-fashioned freestone peaches. Haven’t seen those in the markets in years. Super markets generally don’t identify the type of peach – just white or yellow.

4. The apricots were pathetic – soft, squishy, damaged skins – at every stand at which they were displayed.

5. Most of the north side of the market is now given over to hot food service, jams and jellies, and other non-produce offerings.

6. There was a “no dogs allowed” sign that never used to be there. However, one woman thought it didn’t apply to her. Rover, or Roverette was along for the ride in her shopping cart. And many of the little kids thought the dog was there for their amusement.

7. Zucchini flowers seem to be the rage this summer. Yum. Stuffed with cheese, or lobster, or crab and deep fried.

8. Plenty of cantaloupes that looked and smelled good.

10. The number of stands offering those wonderful Japanese momotaro tomatoes has doubled to two.

11. Plenty of all kinds and colors of tomatoes everywhere.

12. The agricultural industry’s drive to create strawberries as a year-round crop seems to have infected the organic farmers’ market trade. I sniffed baskets of strawberries at a dozen different tables and couldn’t find any with that great fresh strawberry aroma.

13. The guy with the “fresh local fish” sign was selling Atlantic salmon. That’s farm raised, color added and certainly not local. I wonder if any of the corn boycotters were buying the salmon with artificial color.

14. Not a whole lot of potatoes to be found.

15. Only a couple of places showed watermelon.

16. A fair number of pretty decent plums on offer.

17. Maybe there are no dogs allowed, but you better watch your step or you’ll trip over one of the unsupervised three or four year olds scampering around on the pavement.

18. Fresh okra, by golly. There’s a gumbo on the menu tonight

20. Some people are filling up on the free tasting samples that they probably won’t need lunch or dinner tonight. I noticed that tasting doesn’t always lead to buying.

21. No one was giving away free tastes at the tamale booth, the sausage stand. But you could taste the Indian food being offered for take out.

22. What happened to cherries in the summer? I saw them at just one stand where there might have been enough there to make a couple of pies.

23. It was a peppers fiesta – loads of red and yellow bell peppers. Also multiple colors of chili peppers.

27. Artichokes as big as soft balls and still tightly packed.

28. Lettuce, lettuce everywhere. But not as much kale as there might have been last summer. Is the kale rage waning?

I arrived today about 11 a.m., the same time I usually get there. I found a parking space one and one-half blocks away with almost no searching. That’s unusual. The crowd didn’t seem as large as I remember. Could it be all of the mid-week farmers’ markets that have sprung up in the area are draining the weekend crowds? Maybe it’s because so many of the produce stands have given way to hot foods and other things.

My favorite farmers’ market has always been the Sunday one in Hollywood. It’s many times larger than the Studio City market and the food booths are separated from the produce area. Parking has been a beast in the past. But it’s Hollywood on a Sunday morning. The crowds are more festive and there are more vendors offering produce. I haven’t been there in more than a year. I think I’ll give it a look next Sunday.