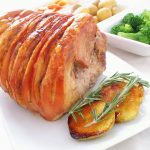 OK. Let’s get serious about the food part of travel discoveries. Travel is in fact broadening and in few areas is it more broadening than when food is involved.

We’ve spent so much time in the United Kingdom over the years that there isn’t much left to discover in the way of local foods. Besides, my wife, the lovely Jennifer, is British and she loves to eat. So, I’ve had a complete, thorough and personal education. Still, there are some things I don’t understand.

This current trip, however, has stripped the mystery from some things culinary British about which I’ve wondered for years.

For instance there’s a cut of pork known as “a joint.” From the look of it I sort of figured it must come from the butt or shoulder of a pig. But my sister-in-law Sylvia, who spent most of her life in and around London and now lives in Australia, always just called it “a joint.” When I would ask from what part of the pig, or hog, the meat was cut she would just tell me “it’s a joint.” I’ve looked in butcher shops and food market meat counters, where I see big, beautiful hunks of pork marked simply “joint.”

This trip I asked sister-in-law Maureen, who lives near the south coast of England. She said, “It’s usually the shoulder, but sometimes it may be the butt.”

It’s roasted with the skin on. The skin crisps up and is called crackling. Anyone who has eaten pork in the Southern part of the U.S. will recognize this. If I’m carving the roast the crackling may never reach the table.

I’ll call that one resolved.

I’ve long been curious about the English tradition of a “Sunday roast.” I first learned of it from Jennifer. She told me her family, poor as they were, often got to have a Sunday roast. My logical guess was that it had something to do with a big meal after church. Turns out that’s the most accepted theory – that in Yorkshire people would put meat up to roast and it would be ready to eat when they returned from church. It could be beef, pork, lamb, chicken, game, or almost anything else. Part of the idea was there would be left overs for at least the first three days of the following week.

The tradition spread to the rest of England and after WW II it shifted heavily to pubs and carveries, where Brits go for a big mid-day meal on a Sunday. Because the food is served to order, there are no left overs to take home for the week. But, then, most of the folks digging in probably haven’t seen the inside of a church in years.

In a pub or a restaurant the meal is ordered and served at the table. At a carvery, which also might be in a pub or restaurant, people line up buffet style to pass the carving station after loading their plates with vegies. At some banquets in the U.S. and on many cruise ships these are called carving stations – the showy spot at the end of the buffet line where the often inadequate quality of beef is dished up. The quality of meat served at British roasts and carveries can be equally as chancy.

I still find it strange to see menu items listed as filet of beef, filet of lamb, or filet of pork. Wikipedia and several dictionaries say a filet is something served without a bone. But I’ve seen it with a round bone in the middle plenty of times in England. Sometimes the menu just says “filet”, with no further definition.

I’ve asked many waiters and waitresses from what part of the animal the “filet” is cut. No one ever knows. Sister-in-law Sylvia has referred to the “filet” countless times over the decades, but never could tell me what one is. I’ve seen enough of them served to know it’s kind of a catchall name for a piece of meat approximately three-eighths to one-half inch thick and weighing about six to eight ounces. I also know it looks nothing like fillet mignon. It looks to be grilled and it always looks to be cooked medium to well.

I’ll keep asking. But I doubt that I’ll ever get this one solved.

Nephew Trevor ordered a lamb chop in a restaurant the other night. It didn’t look like any lamb chop I’ve ever seen before. It wasn’t a shoulder chop and it didn’t come from the loin of rack. It looked suspiciously like the same thing that’s sold as a filet.

I learned this trip that “fresh cloudy apple” is unfiltered apple juice. It’s about a fresh as the “fresh” orange juice served at most restaurants in the U.S. and Britain – fresh from a can, jar, or freezer, not from an apple or an orange.

The British call a sausage a banger because of its propensity to explode as the skin shrinks during cooking. I stab it with the point of a knife before grilling so it won’t explode, and I call it a sausage.

A bap is a small roll; a biscuit is a cookie; bubble and squeak is cabbage and potatoes fried together and called this for the sound it may make in the pan; candy floss is cotton candy; round graham cookies are digestives; dinner can be lunch or dinner; gammon is ham; jacket potato is a potato baked in its skin; ice lolly is a popsicle; lady’s finger is okra; pudding is any dessert; Scotch egg is a hardboiled egg wrapped in sausage meat or pate; serviette is a napkin; a shandy is lager with 7-up; aubergine is eggplant and often used in place of ratatouille; and streaky bacon is American bacon with all its glorious streaks of fat.

Those all are things I’ve learned through the years of being married to a Brit and visiting Britain. But there is one thing in British-speak the origins of which I have no interest.

It’s alternately called a full English breakfast, a full English, a full English fry up, or just a fry up. I don’t care what you want to call it, as long as I can order it up in a B&B in Britain, or in a pub. I’ll even order it in one of those English restaurants in the states, where they serve “British style bangers” instead of the real thing imported.

The fry up is believed to have originated in the English countryside as a meal to carry workers through the long morning hours. The components may vary slightly throughout the United Kingdom; it no longer is served as an everyday breakfast but it often is offered in pubs as an any-time-of-day meal.

The fry up has assumed cult status on both sides of the Atlantic. British restaurants in the U.S. often are packed on Sunday mornings with people ordering a fry up and they aren’t all British expats.

So, what is this culinary wonder? Two rashers of English bacon, one grilled banger, two fried eggs, a portion of Heinz vegetarian baked beans, fried mushrooms, a tomato cut in half and fried, bread fried in butter or fat, and a portion of black pudding, also known as blood pudding, the ingredients of which are better left undiscussed.

While we’re on the subject of what things are called in England, let’s talk about two of the really strange and off-putting foods. If you see a pasty advertised on a board outside a pub or restaurant, it isn’t a strip joint. A pasty, or pastie (it’s pronounced with a soft ‘a’) is flakey pastry filled with a variety of things and the baked. Most often it’s filled with steak, potatoes and possibly onions. I saw one on offer today with pork and apple.

The second item, the really strange and offensive one, has caused all sorts of controversy here in England. The term was banned temporarily from Facebook in its culinary usage as being too offensive in its non-culinary usage. An industry advertising board has barred its use in radio and TV ads unless it is made clear throughout that it is referring to food.

Imagine picking up a menu and seeing “faggots with gravy’ listed. In its historical usage it has nothing to do with anyone’s sexual orientation. But it can be jolting to the sensitivities even for someone who knows what it actually is. It’s a mixture of butter, onion, pigs’ liver, lamb or pig’s heart, pork belly, beef fat drippings and may also include other organ meats and animal intestines. All of this usually is rolled together in a ball and often is cooked in gravy. They also can be formed into a sausage patty or link. Why it’s called what it is apparently is lost to history.

It’s a product that grew out of southern Wales and has migrated south into Devon and Cornwall. They also can be found in the British midlands. I’ve eaten all manner of strange assemblages under the heading of sausages through the years. But I’ve never eaten one of these and probably never will if for no other reason than I couldn’t make my mouth say the word to order it.