IN THE SOUTH OF ENGLAND – 2014 / I went looking for King Arthur and look what I found; a story of fulfillment and celebration 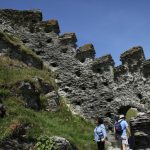 It was a day that was going to be devoted to the last step in my journey to trace the legend of King Arthur of roundtable fame. I expected there might well be nothing food related about which to write this day. But that would be alright because I would be closing the loop on my Arthur travels.

Several years ago, during a five-week drive through England, Scotland and Wales, we visited many of the locales that are part of the Arthurian legend. I walked on Cadbury Tor; we visited two of the sites associated with his death and burial. I looked out over what once may have been the Veil – or Isle – of Avalon, where legend has him sleeping until he returns to save England sometime in the future. If he didn’t show up in the early 1940s it’s hard to imagine when it might be more justified. Or was Churchill really Arthur reincarnate?

This day we were going to Tintagel, where Arthur was born, the only important site in his story that we had not yet visited. Arthur spent virtually no time at Tintagel, having been given into the care of Merlin as a baby and spirited away for protection from the enemies of his father, King Uther Pendragon.

The ruins of the castle at Tintagel today have nothing to do with either Arthur or Uther. This castle was built hundreds of years after by Richard, Earl of Cornwall. For me there would be no romantic musings of young Arthur having frolicked here. To prepare for the visit I re-read both volumes of one of my favorite novels, T.H. White’s “The Once and Future King.”

I had been advised to prepare for a strenuous day, with hundreds of steps to be climbed to the two different sections of the hilltop ruins. “I’ll go as far as I can,” I thought, thinking of the significance of this day coming just two days short of the sixth anniversary of my quadruple coronary bypass surgery.

First I climbed the steps to the hill with the main sections of the old castle. They were many and steep, but I did it without much difficulty. Then I spent an hour roaming over the hilltop to view the remains of the old chapel, the gun placement, the garden and other areas. I circled the entire hilltop, with many diversions to sites within the perimeter.

With this completed, I descended the steps to the entrance and decided to climb the stairs to the smaller of the two sections of the castle, across a bridge that spans a cove that separates the two sections. This time I decided to count the steps. There were 114 to the main level and then 35 more to the topmost level – 149 in all.

My guess is that I climbed somewhere in the vicinity of 300 steps during the visit and spent some two hours walking among the ruins. The longer I climbed and walked the more I became filled with celebration of the significance  of what I was doing on this day so close to the anniversary of so important and event in my live.

The day was in fact a celebration. I came back down with a smile on my face and in my heart.

However, I still thought the day would be void of anything about which I could write for a food magazine.

In conversation with another passenger in the Land Rover that shuttled visitors from the village of Tintagel to the cove at the entrance to the castle ruins, a woman asked if I had tried an authentic Cornish pasty. I explained I had eaten one in Boscastle the day before and it wasn’t very good. She said she makes excellent pasties at home and I asked where she lives. We all laughed.

Then the driver of the Rover jumped into the conversation and recommended a small restaurant called Deli Licious in the village of Tintagel. Jennifer and I dropped in and ordered two traditional pasties. After years of trying pasties in different parts of the United Kingdom and at several “English” restaurants in the U.S., I finally had the real thing – one I would want to encore.

A pasty is the English version of the Polish pierogi or the Russian piroshky. In the English version to dough is supposed to be more flaky the other two. The traditional pasty is filled with steak, onion and potato. Many places these days offer a multitude of other fillings.

So, there was going to be something about which to write in a food magazine after all. But, wait, the best was yet to come.

Over breakfast at our B&B we met Mark, a butcher from Belgium. He told us he comes to Cornwall every year to eat sea food because he lives deep inside Belgium and doesn’t get good seafood there. He told us of four restaurants in Padstow owned and operated by celebrity chef Rick Stein – restaurants where he thought the seafood was particularly good.

After our time at Tintagel we drove to Padstow with the thought that we might have dinner at one of those places if we could find it. But I approached the whole thing with some skepticism because the online menus for the restaurants were distinctly unimpressive.

In any event, Padstow seemed like a worthy destination. We figured we would walk around the small fishing village and find someplace to eat, even if it wasn’t one of Stein’s places.

That’s when fate intervened – the kind of fate that has led Jennifer and me to great meals hundreds of times as we’ve traveled in the U.S. and abroad.

Jennifer parked the car in a lot and as I got out of the car I looked across the street and saw the words The Seafood Restaurant across the front of a building. It was Stein’s showcase restaurant. I was told no reservations were available until 9:30 p.m. But, the hostess said, we could eat at the bar from the same menu. It would be first-come first-in when they opened at 6:30.

We’ve done that before in restaurants in California, New York, England, Italy, Canada, New Orleans and who can remember where else. So, we returned to the restaurant at 6 p.m. and put our name on the list. We sat at a patio table and had a drink and a small bowl of olives while we waited.

Soon we ordered our meals and moved to the bar, where we were seated next to a station at which a young chef – he is 26 – was preparing appetizers to order for the night’s diners.

Perfect. I could watch what he was doing as he prepared plates of Jamon Iberico ham, sliced salmon in a Ponzu dressing with gloriously pink grapefruit, delicately sliced smoked salmon, a selection of oysters, some of the most luscious looking langoustines I’ve ever seen, and an assortment of other cold appetizers. And I could chat with him about the food, the restaurant, his training, his ambitions and other chefs he admires.

This turned into the meal of the trip up to that time and one we will long remember with great affection.

To start I had a plate of sashimi – scallop, salmon, John Dory and sea bass. Each brought its own freshness to the tongue. It was the first time I tasted John Dory raw. It came with thinly sliced dashi, lightly salted soy sauce, pickled ginger with a real bite, a dab of freshly made wasabi, and a dressing of edible flowers.

Then I ordered a whole local lobster. I asked for it steamed rather than grilled. I would not have done this had I not dropped in on a fish store in Boscastle and seen lobsters on offer in the display case. They looked just like Maine lobsters, except the shell was a bit more orange and had a slight mottling of white.

Whoever steamed that lobster knew exactly what he or she was doing. It was perfectly cooked, as sweet and tender as any lobster I’ve ever eaten right out of the waters of Maine. I passed on the mayonnaise based dipping sauce. If you ever see me dip lobster into any kind of sauce – even drawn butter – it’s because the lobster is inferior. A good lobster is its own treasure and should not be compromised with sauce. And a good lobster is so all absorbing that anything served with it is likely to go untouched. This time I ordered a small portion of “chips” – French fries in America. These were thick cut, fried to perfection and well worth deviating from my usual habit of having no distractions at the table when eating a lobster.

I learned that the difference in the color of the lobster shell and the reason for the mottling is because they are pulled from colder waters than those off Maine.

All-in-all it was quite a day here in Cornwall: a pasty to remember, the kind of meal worth traveling 6,000 miles to eat, and the feeling of personal satisfaction that came from being able to complete physical activity that would have been beyond my reach six years ago.

I left the B&B in the morning to look for the roots of King Arthur. I touched lightly on those roots and found so very much more along the way. And all because I had the absolute good fortune to meet and marry a native-born Brit nearly half a century ago. Thank you, Jennifer, for showing me your land and holding my hand all these years.