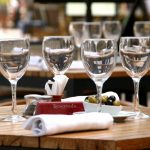 ATTENTION: All you folks who think an ap button is human contact

If you have come to rely on aps and the internet to make restaurant reservations: STOP. Go back to the old fashioned way; skip the online reservation services and call the restaurant directly. Talk to somebody. Believe me, you’ll save yourself some grief.

You know who your are. You make about 15 million reservations at some 31,000 restaurants each month using Open Table. I doubt that I’ll be missed, but I no longer will be among those millions.

I’ve closed the book on Open Table. No more. Never again for this restaurant reservation website. If I can’t make a reservation directly with the restaurant I’ll dine someplace else.

It all came to a head recently when we showed up for our 5:15 pre-opera dinner at Jardiniere in San Francisco. They had no record of the reservation even though I know I made one.

Do you know why I’m so sure I made that reservation? 5:15, that’s why. It’s not a time at which I would make a reservation for an 8 p.m. curtain at a theater two blocks away unless I had no other choice. In addition, I never ask for reservations on the quarter hour, always on the half hour.

I’ve sworn off Open Table a few times in the past. I figured out years ago that it serves mostly as a place for restaurants to dump their off-prime reservation times. Restaurants have no trouble booking the prime reservation times between 6:30 p.m. and 9 p.m. most nights. If there’s some kind of special event or theatre activity in the area, they might adjust the time. If it’s a traditionally slow mid-week night they might open up the whole night.

Ask for a 6:30 reservation at Open Table for a Friday or Saturday night, or for a pre-theatre dinner and you are very likely to be told the closest times available are 5:15 p.m. or 8:30 p.m. That’s what happened with our Jardiniere reservation.

If I had called the restaurant I probably would have gotten my desired reservation.

That’s how I know the screw up at Jardiniere was the fault of Open Table. I wanted a 6 p.m. reservation. That’s a reasonable time at which to have dinner, walk to the War Memorial Opera House, visit the restroom and get to our seats in time to browse through the program for the night’s performance.

Not available, Open Table told me. I could have 5:15 or 8:30. Of course I could. By 8:30 we would be well into the first act of the opera and the restaurant would be empty.

I had gone online to the Jardiniere website for the phone number to call for a reservation. But it was off hours and no one was answering the phone – not even voice mail. It was a busy day at my office so I did the unthinkable. The “make a reservation” option led me to Open Table.

Given my history with this stock market darling of a restaurant reservation website, I wasn’t surprised when we showed up at the restaurant and the hostess told me they had no record of our reservation. I explained the situation to the hostess and received a look of recognition from the young man who was assisting with seating and overheard the conversation. I asked if this happened frequently. They cautiously deflected and didn’t quite answer, which in itself was an answer.

The hostess suggested the bar while she tried to find a place to fit us in. No sooner were our drinks put in front us than the hostess arrived and led us to a very nice table on the main floor of the restaurant.

Our meal was wonderful, and as every decent restaurant in the area was booked solid before that night’s opera performance and events at other nearby theaters, we were particularly appreciative.

We’ll be back at Jardiniere. It’s an old favorite from earlier visits to San Francisco. But never again for Open Table. Not here; not anywhere. As Jennifer suggested, if I’m too busy in the office to handle the reservation making myself, she can do it from home.

The matter of available reservation times is one thing. It’s easily resolved by putting away the ap, staying off the internet and calling the restaurant directly.

The matter or Open Table reservations that never get reported to the restaurant is something else altogether. It’s up to restaurant owners to figure out what to do about that.

The recent news that Priceline is buying Open Table for $2.6 billion dollars is still another matter – a commentary on the times in which we live. So confident is Priceline that the ap generation will not put aside its hand helds and dial a phone number that they are willing to pay an obscene amount of money for the company. Why not? 15 million reservations a month is a big number and Priceline will just add this to its menu of services for the traveling public.

If some of us decide to opt out after we show up at a restaurant in San Francisco before the opera on a Saturday night and are told they have no record of your reservation, big deal.

From that 15 million monthly reservations, deduct one – me. I’ve closed the book on Open Table.