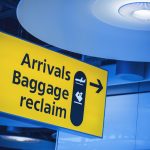 At 35,001 feet above the Atlantic, with my taste receptors dulled by the altitude and low humidity of the business class cabin of our impossibly large 777-300 aircraft, I am not going to complain about the airline food.

It’s pointless, as I pointed out in The Futile Quest for Tasty Airline Food two years ago.

What is notable is that every entrée on the flight menu contained tomato, balsamic vinegar, green peppers, or some combination of those. That’s because tests have shown that only highly acidic foods and flavorings can deliver any kind of air-born flavor.

Instead of complaining about the airline food, I’m going to celebrate my return to a place I love and appreciate – a place I consider a second home. This land of England is the birthplace of my wife, Jennifer. That by itself is reason enough to appreciate this beautiful and courageous nation.

There was a victory of sorts at Los Angeles International Airport Sunday night. Mark Peel’s restaurant, Campanile, was directly across from our boarding gate. I had read that Peel moved his former La Brea Avenue eatery to the airport but I didn’t know in which terminal it was located.

Faced with the option of an early dinner at Campanile, or a 9 p.m. airline dinner followed immediately by lights out and good night, the choice was easy. We ate before boarding and declined the airline food. There were many alluring options on the Campanile menu – thoughtfully crafted appetizers; chicken, pork, beef, and vegetarian entrees. The crispy flattened chicken and the pork chop each called to me, as did the duck meatballs appetizer. But I didn’t lose 15 pounds in the last three months to get off to that kind of start on this vacation. So, it was a very nice burger and a side of steak fries that we shared. By 6 p.m. dinner was over.

Anyone out there planning to play The Weight Game should take note of the responsibility exhibited by the above. To learn the rules of The Weight Game, get some valuable information to inform your participation and see the prizes being offered go to:

PLAY WITH WEIGHTING GAME / it’s not a carnival trick

If anyone tells you the food is better in first or business class than it is in coach, scoff at them – scoff loudly. The omelette in my granddaughter’s play kitchen set was about as attractive as the one served to me for breakfast this morning and the so-called “beef filet” was left over from the Stanley Cup finals and had the texture of a dry loofa. I ate the omelette and a couple of mouths full of some potato concoction to “fill a hole.” (Not complaining, just observing.)

“Fill a hole.” That’s one of those wonderfully descriptive Britishisms you will find scattered through the journal of this vacation. “Fill a hole” needs no further explanation. How would you impart the same thing in American? I was “puckish”, so I filled a hole.

For those keeping track of this kind of thing, no lunch Monday. The body clock was out of whack. Dinner was a duck spring roll, a roasted half chicken with green beans and a small portion of mashed potatoes, and a glass of Cab Sav.