IN THE SOUTH OF ENGLAND – 2014 / for people and restaurants, getting old beats the alternative 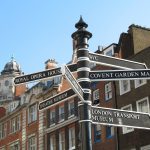 Sometimes conventional wisdoms prove to be true. Like: getting old beats the hell out of the alternative.

Sometimes well-earned reputations turn out to be understated. Like: If there’s a good restaurant within 100 miles, Larry and Jennifer will find it.

Today we proved this needs to be extended to 6,000 miles.

How did these two events come to pass?

It is the oldest restaurant in London. The Red Coats hardly had finished licking their wounds from the defeat at the hands of the Colonists, when Rule’s opened in 1798. About the same time Napoleon was launching his campaign in Egypt, Londoners started dining at Rule’s.

Those are the facts. Now, here’s what happened:

Yesterday, we determined we would take a day trip to London from our B&B in Little Hampton on the south coast of England. This morning I scanned some travel brochures and books to see if I could spot a place for lunch.

From all the scores of restaurants I saw, my eyes fixed on Rule’s. “This sounds interesting,” I said to Jennifer. “It’s the oldest restaurant in London.”

I looked it up on the internet. White table clothes. A uniformed doorman out front. “We may not be able to get in without a reservation. But let’s try.”

We needed to ask directions to Maiden Lane only twice after arriving at the Covent Gardens underground station. A modest rain was falling on the cobble stone streets. With umbrellas raised, we turned the corner marched up to the restaurant and asked if we could be seated without a reservation. By 12:30 we were at a nice table for two. By 1:30 the place was nearly full.

Rule’s proves once again that old is good. For a starter* I ordered rare roasted veal. It was cut very thin and served at room temperature, topped with lambs lettuce, shaved pecorino and a drizzle of excellent extra virgin olive oil. Around the perimeter of the plate were shelled broad beans. I ordered this because the 2009 St.-Emilion Grand Cru I tasted would not have gone with the pickled herrings that were on the menu.

The suckling pig was not finished roasting, so I ordered two lamb loin chops. They were served with an excellent aubergine*. The lamb was tender, full of flavor and cooked perfectly to order. I ordered a side of mashed potatoes. Great decision. They were dreamy Yukon golds.

Dessert was a trio of ice creams – chocolate, hazelnut and chocolate chip.

So, that’s the story of how we traveled 6,000 miles to pick a gem of a restaurant out of a travel book, a restaurant of which we never before had heard and at which we had a meal well worth the 216-year wait.

Rule’s marks the fourth time we’ve eaten a restaurant that is the oldest in its city.

A couple of years ago we had lunch at La Procope  (click and scan to October 30) in Paris. It’s been operating in the same location since 1686, before there even was a United States of America. There I ate an authentic Parisian coq au vin made with a six pound rooster. The pieces of chicken and the bones were so large I thought it might have been beef.

I first ate a Philippe in downtown Los Angeles in the early 1960s, when I was working as a political reporter with offices in City Hall and the County Hall of Administration. It was instant love. Philippe is the oldest restaurant in Los Angeles, having opened in 1908. I’m still there frequently for either a pork or lamb sandwich with a side of pickled beets and onions.

And then there’s the oldest restaurant in Hollywood, the legendary Musso and Frank Grill, which opened in 1919. Hollywood royalty has eaten breakfast, lunch and/or dinner at Musso, as have most of the writers and newspaper folks for nearly a century. It’s right on Hollywood Boulevard in the heart of Hollywood and it’s packed most nights with loyal locals as well as tourists who have been tipped off by a concierge or travel agent.

Out of all this we’ve made a resolution: when traveling from now on we will do a bit of research in advance to learn about the oldest restaurants in the cities we will visit. At 75-years-old, I’ve learned getting old does have certain advantages. And it certainly does beat the hell out of the alternative.