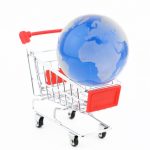 This is not your grandfather’s childhood neighborhood market. Unless, of course, he was born in Moscow, Jeonju, Athens, Guadalajara, Sidney and Sacramento – all at the same time.

It would take one strong and expeditious stork to pull off the multi-national baby delivery trick that granddad would have needed to grow up experiencing all the culinary customs native to Korea, Mexico, Australia, Eastern and Western Europe and places in between.

Luckily, there is another approach to diversified food assimilation that makes it a lot easier for current and future granddads (and the stork).

It’s KP International Market, right off the Zinfandel exit on Highway 50 in Rancho Cordova CA, nearby to Sacramento.

No matter which part of the world may have imparted its food traditions on you and your family, there is something here to create misty-eyed reminiscences, or open the door to new eating adventures.

From the outside, KP looks like a common semi-urban grocery store. But the fresh meat, fish and produce, worldwide spectrum of packaged and dried goods and the global food court tell a different story eloquently.

Don’t expect to absorb it all on your first trip. This is an 80,000 square-foot shopping and eating destination. A lesson in world culture. An international Disneyland of food.

There is an immense selection for everyone from family shoppers to ethnic restaurant chefs. Sections are by continent or packaging. Staples, oddities and childhood reminders for eat-in or take home.

In short, there is a variety and profusion of items you otherwise would not expect to see unless you were strolling the grocery aisles in local markets in faraway places. It also is a statement that no matter where your origins, if you live anywhere near Sacramento, there is no longer any need to give up customary tastes because the food and seasonings are unavailable.

The genius of the “I-bet-you’ve-never-tried-one-of-these-before” experience, however, is that you don’t need to know the best way to prepare any of the ingredients on offer. They do it for you at the international food court.

Whether you have heard of Korean bimibap or not, you don’t need to know how to concoct it on your own. Because they make it in the dining area. Same for the beef bulgogi bento box, Persian koubideh kabobs, Mexican pozole, or bacon burger chili dogs.

Just like the grocery market, the illuminated overhead menu at the food court proclaims optional abundance. Each illustrated sign board, be it for the Korean BBQ, Mediterranean platters and kabobs, or pho, suggests you could eat here nearly every day and never have the same thing twice.

And judging from the selections we tried, all of it would be good – whether it be as familiar as tamales or as exotic as Tteokbokki, a popular Korean snack of soft rice cake, fish cake and sweet red chili sauce usually sold by that country’s street vendors.

Conceding that we couldn’t sample everything in an afternoon, we decided to focus on Asia and Eastern Europe.

And no, I had never heard of bimibap. Now I have. And I enjoyed it. It’s a bowl of warm white rice surrounded by vegetables and sliced meat and topped with a sunny side up egg. It comes with hot broth. The idea is to mix everything together along with the condiments for a satisfying lunch.

Which it would have been, had I not had to stop in the middle to turn my attention to the Chinese roast duck on rice. Big portion. Nicely prepared. More than enough for another satisfying lunch.

Except I also ordered a Russian piroshky – a delightful baked bun stuffed with cabbage and beef.

Next time? Maybe the barbacoa, Kung pao chicken, bbq pork spareribs – or whatever the person in front of me is having. And maybe even dessert from the Korean or Russian baked good section.

It’s hard to capture just how many choices KP offers shopper and diners. And I may have been a little hasty in saying this is not your grandfather’s market. Because we saw shoppers of all ages. Of all ethnicities and food cultures. Certainly a grandfather or two.

And while those grandfathers’ definitions of “I-bet-you’ve-never-tried-one-of-these-before” may differ from mine, no doubt they too could find something alluring in their own never-tried category.