TELL THE SULTAN I WON’T BE DINING TONIGHT 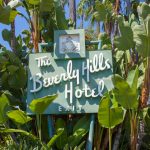 If you’re like many people I know you think what I do as a food writer and editor is all fun and games. For the last six years, since I founded the restaurant recommendation website atLarrys.com and this online magazine, you would have been right.

I eat in great restaurants and post recommendations at atLarrys.com. I’ve written hundreds of articles for TableTalkatLarrys.com about a wide range of food-related subjects and I watched the readership grow.

All good until this week, when the Sultan of Brunei decided to march backward into history and politics collided with the palate.

I was about to post an atLarrys.com recommendation for Wolfgang Puck at the Hotel Bel-Air. Puck has elevated the restaurant at this beautiful Beverly Hills setting is beautiful to wonderful heights. But I have to pass on recommending the restaurant for reasons having nothing to do with the food or the service.

The Hotel Bel-Air, along with the 101-year old landmark Beverly Hill Hotel and its famed Polo Lounge, are owned by The Dorchester Collection, which in turn is owned by the Sultan’s Brunei Investment Agency.

That wasn’t an issue as Jennifer and I dined at Puck’s restaurant at the Bel-Air several times, including once as recently as six weeks ago. It wasn’t an issue either for the scores of local organizations that held major annual events and housed their visiting executives at the two hotels.

Not until this week, when it became known that the Sultan was imposing harsh new Islamic laws on the people of his nation. The first phase was introduced last month. Last week, Sultan Hassanal Bolkiah announced he would continue with further implementation of laws that trample on women’s and LGBT rights. Known as Sharia Law, it calls for amputations and flogging of women who have abortions and stoning to death of gay men and lesbians. There are other equally heinous requirements in various interpretations of the laws.

atLarrys.com publishes restaurant recommendations, not reviews. If a restaurant isn’t good enough to recommend to a friend, relative or colleague you won’t find it at atLarrys.com. We don’t do negative reviews. We suggest where you may want to dine, not where you shouldn’t eat.

Puck’s restaurant certainly qualifies as a top notch place to dine. But to tell readers to dine there I would have to tell them to go to a hotel owned by someone who believes stoning to death is acceptable. I cannot do that. Nor can I blame Puck for any of this. As far as anyone knows, he just operates the restaurant and has no role in the hotel itself other than as a tenant.

A boycott of the two Beverly Hills hotels gathered steam quickly, with celebrities leading demonstrations in front of the Beverly Hills Hotel. The Motion Picture Academy pulled next year’s pre-Oscar event from the hotel. The Feminist Majority cancelled its annual bash and moved to a different location. And the Beverly Hills City Council adopted a resolution calling on Brunei to divest itself of the two hotels.

Christopher Cowdray, CEO of The Dorchester Collection, said nine events had been cancelled at the Beverly Hills Hotel as of early this week.

Cowdray called the boycotts and other reactions against the two Beverly Hills hotels unfair. He pointed out that other hotels in Los Angeles are owned by Saudi Arabia, which also has harsh anti-women and anti-LGBT laws. The U.S. has no qualms about trading with that nation, he said.

Cowdray also claimed the boycott could harm the 1,000 local residents, who are employees of the two hotels, and, he added many businesses in the area would suffer if tourists stopped visiting the hotels.

Those are deflections, not defenses. But they are not totally without validity. Since when has the foreign or trade police of this nation, or any other for that matter, been based on rationality or consistency.

There may well be other restaurants on the atLarrys.com extensive list of recommendations that are owned by less than stellar characters. I just am not aware of who they are. And there very likely are other hotels in Los Angeles run by reprehensible interests.

As for Wolfgang Puck at the Hotel Bel-Air, I won’t be recommending it at atLarrys.com. I love that restaurant; the room is warm and welcoming and the food is terrific. But under the current circumstances I could not bring myself to walk onto the hotel grounds to reach the restaurant and I couldn’t eat there knowing some small part of my tab would be going into the coffers of the Sultan of Brunei. If I can’t do it how could I suggest it to others?

I’m sure the Sultan will not be sitting around tonight wondering why Larry Levine hasn’t been dining at the restaurant at his Hotel Bel-Air, or having lunch at the Polo Lounge. But I can’t separate the politics from the palate. In my own small and personal way I need to make this statement.

As for Wolfgang Puck, I remain a huge fan of his cooking and his restaurants. Chinois on Main in Santa Monica and Spago in Beverly Hills are highly recommended at atLarrys.com and WP 24 at the Ritz Carlton Hotel in downtown Los Angeles will be added soon.

There are too many great restaurants in L.A., Puck’s other places very much included, for me to have to compromise my conscience. So, no, Jennifer and I will not be dining at the Hotel Bel-Air and I will not be recommending it to others.