ON THE TRICKY SUBJECT OF TIPPING 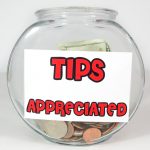 Do you tip in a restaurant?

If you don’t, you probably wouldn’t be reading this magazine.

Do you tip the full percentage on that expensive bottle of wine?

Do you tip the host or hostess who seats you? Or just the waiter and assume the tips are shared, or pooled? What about in those days when the host was called the maître d’?

Do you look at tipping as a reward for good service, or just something that’s expected?

Is tipping something you wish you didn’t have to do?

Do you think of tipping as a demeaning custom that belittles working people?

Does tipping make you feel good about yourself?

Would you rather do away with the custom of tipping and have employers pay better wages?

Do you think people who advocate an end to tipping are just cheap skates?

Have you ever “stiffed” a waiter because the service or food was unsatisfactory? Did that make you feel guilty?

These are the kinds of questions that are likely to come up if you introduce the subject of tipping into a conversation.

The practice of tipping pretty much permeates American culture. We tip valet parkers, bellhops, car wash personnel, hotel housekeeping staff and concierges, hair stylists and manicurists, pianists at piano bars, the doormen who flag down our taxis, dealers at blackjack tables, the pizza delivery kid, taxi drivers, and of course we tip waiters and waitresses in restaurants.

But why do we do this, when there are countries throughout the world where tipping is done with far more restraint, or even considered insulting?

Do we have a greater sense of responsibility to those who serve us? Do we just instinctively like to throw our money around to impress people? Do we feel guilty knowing the person serving us is being paid a substandard wage? Do we think we are buying favored treatment?

Certainly, when we used to stick a bill into the hands of the maître d’ at a restaurant or night club, it was because it would get us a better table. And if we were regulars it might get us a table when the place was sold out. Back in my bachelor days of the 1950s and 1960s the maître d’ at many of the best restaurants in L.A. and Las Vegas knew when I made a dinner reservation he would wind up with a double sawbuck in his hand. A twenty wasn’t chopped liver in those days. They knew me by name and I knew them. So, was I bribing them for a better table or thanking them for holding my favorite table in the station of my favorite waiter?

But those days are long ago. The formal position of maître d’ has morphed into a host or hostess. Today people think nothing of asking for a different table if they don’t like the one to which they are directed. As for making a reservation for a favorite table, the computer has replaced the personal touch of the maître d’.

While we no longer tip the host, if she takes our coats and hangs them in the closet we still tip her when she returns them to us at the end of the evening. Strange people, we Americans and our customs.

The Oxford English Dictionary defines “tip” as the act of bestowing “a small present of money upon an inferior, especially upon a servant or employee of another, nominally in return for services rendered in order to obtain an extra service.”

That’s pretty harsh. I’ve been a tipper all my life and that certainly was never my attitude about it.

Every once in a while we hear or see something that raises a question about the future of tipping in restaurants in the U.S. I’ve ordered food at airport walk up restaurants and been told the staff was not allowed to accept tips. Recently, the chief executive officer of the Noodles & Co. chain of restaurants announced the firm’s employees are paid well enough and tips would no longer be permitted. I wonder if the employees agree.

That’s a long, long way from Le Bernardin in New York or Melisse in Los Angeles printing “no tipping allowed” on a menu. Neither of them does that, or is likely to any time soon. The tradeoff: no tipping for your $8 burger at Noodles, but when it comes to the $600 tab that includes a $300 bottle of wine at The French Laundry, let her rip.

It’s doubtful we will see an end to tipping in U.S. restaurants in our lifetimes unless the entire American economic system is replaced with something else – something equitable.

Let’s grant that the waiter at The Modern must have more knowledge and polish than the server at your local coffee shop or fast food joint. But is the labor they do that much different? They each take your order, bring your food, check to see if everything is OK, then bring the check. In the high end place the waiter probably doesn’t even deliver the food to your table. But, while the waitress at the deli may get a $4 tip on a $20 pastrami sandwich and a Dr. Brown’s Cream Soda, the waiter at Biba is going to get a $60 tip on a $300 tab.

President Obama wants to raise the minimum wage from $7.25 an hour to $10.10 an hour. A minimum wage worker at fast food and food court restaurants, who worked 40 hours a week – and most of them don’t get that many hours – for a full year now earns $16,120 tips. Raise the minimum to $10.10 an hour and the annual wage becomes $21,008. Ever try raising a family on that? Tips are essential to these workers. Yet there are those in Congress and in the body politic of America who would deny even this wage level.

The word “tip” came into common usage for a gratuity around the 1700s in England, according to the Oxford English Dictionary, although Cornell University professor Michael Lind found evidence of a craftsman asking a customer for trinkgeld, or “drink money”, for an apprentice in German in 1509.

When Americans go abroad, they often are at a loss to know what to do about tipping because customs vary so widely. In Germany it is not considered proper to put the tip on the table; it should be handed personally to the waiter. Japanese consider it insulting to hand over cash. In Austria a service charge usually is included in the bill and the custom is to round up to the next even amount for the tip. In Australia and New Zealand, restaurant workers are paid higher wages and tipping is considered an unwelcomed import from the U.S. The French think it is flashy to tip for no good reason. They apply a 15% service charge to bills. But the waiter may never see any of that.

The best bet is to consult one of the travel advisory books, most of which include advice on tipping. .

Even in the U.S. there is debate over how much to tip. Twenty percent has become the new 15% in most places, up from the 10% of decades ago.

Then there’s the sticky issue of what to do if the service or food is sub-par. Do you tip down to make your displeasure known, or leave no tip and run like hell to get out of the place before there’s some kind of awkward confrontation?

The number one reason given in surveys for tipping down is not bad food or service but taking too much time to bring the check. Really? The food and service were wonderful, but I had to wait five minutes for the check?

I always assume the people working in the restaurant are trying to earn a living. So I will only tip down in extreme circumstances. If I’m really that unhappy I will leave my normal tip, voice my displeasure to the management, and not return to that establishment. I’m not willing to punish the entire staff – assuming tips are shared, or pooled – when I don’t know where the fault for my discontent lies. Did the kitchen take too long turning out my meal, or did the waiter just leave it sitting at the window for a long time?

There are those of us in this great nation who long for a more just economic system, one in which all working people are paid a decent living wage – not a minimum wage, a decent wage. But this is, after all, the land of plenty and those who have plenty have grown accustomed to throwing around their economic weight to buy favor not available to those of lesser weight.

In the meantime, the $2 million a year corporate executive will go to Alinea, order a $500 bottle of wine and tip the waiter and sommelier 20% – $100 – for opening the bottle and pouring the wine. And that doesn’t count the tip on the rest of the bill.