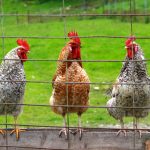 If your last name is Fryar, what do you do for a living?

I first came across Mr. Fryar in a recent feature broadcast on National Public Radio (NPR). The focus of the piece was the boom times in the chicken ranching and production industries brought on by shortages of beef and pork.

Fryar’s company markets more than 500,000 of their own chickens each week. The firm also purchases, processes and markets some 600,000 chickens weekly from another Arkansas ranches.

Ozark doesn’t sell the whole chickens you find in your super market or butcher shop. They process and sell some three million pounds of antibiotic-free poultry products each week. Ozark sells boneless chicken parts, mostly for the restaurant industry.

The deboning is done by hand. Ozark Mountain chickens are fed only natural grains, vitamins and minerals and never animal by-products. Nor are the chickens fed hormones. The company website claims its chickens are 100 percent natural and raised cage free, with fresh water and healthy ventilation available at all times.

These are boom times for Ozark and much of the rest of the chicken industry.

A national cattle shortage caused largely by the drought is driving up the price of beef. Cattle numbers in the United States are at 60-year lows. The drought has caused shortages in feeds and forages, which in turn caused ranchers to reduce herd sizes. In the last year beef prices have gone up some five to ten percent, depending on the cut of meat. They now stand at the highest level in history. A drought is having an even bigger impact on Australia, where some 20% of the world’s beef is produced.

In addition to the effects of the drought in the U.S., the unusually cold winter across the nation slowed the growth rate of beef cattle. Industry experts estimate it will be three or four years before cattle herds return to normal if climate conditions improve. It takes that long to replenish herds and to raise the cattle to commercially viable weights.

Further driving the boom in the chicken industry is the rapid increase in pork prices. An attack of a disease called Porcine Epidemic Diarrhea Virus has spread through 28 states killing millions of piglets since the virus was first detected a year ago in Indiana, Ohio and Iowa. The virus still is spreading virtually unchecked as researchers seek a cure and preventative drugs.

The disease apparently poses no risk to humans but is 100 percent fatal to piglets.

Fryar told NPR a small chicken can be ready for commercial processing just four weeks after hatching. Larger chickens reach commercial weight in nine weeks. So, as long as the feed supply holds out and nothing unusual happens to impact the production of new hatchlings, it looks like chicken is going to play a larger role in dining rooms across America for the foreseeable future.