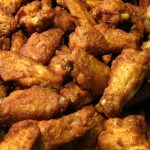 (This was posted a week before the 2014 Super Bowl game. We decided to leave it up on the magazine after the game because the chicken wing recipes are just so good. So, who ever wins, or won the game, don’t let that stop you from making a batch of wings for snack food any time the urge strikes.)

I can’t hold off any longer. Super Bowl season has gotten to me.

Most years I don’t watch the game. I like football, but so much of sports has turned into showboating and braggadocio. And football may be is the worst offender. The NFL playoff season has become a booze hound’s excuse to act boorishly whereby the rest of the year he does it without any excuse at all. The old sports editor in me repels at the sight of a defensive end doing a celebration dance after sacking a quarterback he’s being paid millions of dollars to sack.

John McKay, the late coach of national championship teams at USC used to tell his players, “When you get to the end zone, act like you’ve been there before.” How quaint. Most of today’s professional athletes wouldn’t understand that concept.

But I’m going to watch this year’s Super Bowl game because it could be very interesting. Will Payton make the kind of mistakes upon which the Seahawks can capitalize as they did in the conference championship? Will the Seahawks be able to capitalize one more time if he makes those mistakes? Will Russell make the kind of mistakes he made in the conference championship game? Will the Broncos be able to capitalize on those mistakes better than the Niners did? Will Seahawks fans ever outgrow their inferiority complex? Will Pete Carroll get out-coached again as he did with regularity at USC?

The Super Bowl is a unique phenomenon in the culture of sports in America. Baseball is America’s national past time. But there are no World Series parties in living rooms across the land.

The NCAA basketball tournament draws even non-fans who think they can correctly pick the winners of 67 games in office pools. But magazines and newspapers don’t run features on what foods should be served at game-watching parties.

There is no outbreak of house parties to watch the Kentucky Derby or the Masters Golf Tournament.

The World Cup? Strong ethnic cultural appeal and the rest of us find other things to do.

It’s only the Super Bowl that drives American men, and some women, to epicurean madness. Mountains of food appear in living rooms and dens across the country. People, who watch no other football during the year raise six packs of suds as they yell, cheer, boo and criticize the play calling and officiating.

There is one tradition attached to the Super Bowl culture, however, that is very attractive to me.

Yep. Chicken wings, a snack food of deliciously infinite possibilities. From what I’ve read and heard chicken wings are a staple at Super Bowl Parties and that’s enough for me.

I grew up eating chicken wings my mother would prepare. The recipe was ridiculously simple, but the wings were audaciously delectable.

Here’s how she did it. All you need is some chicken wings, onion salt, paprika, salt, pepper and napkins.

(Notice she left out the chicken wings. It would be a good idea to get a bunch of them with all three sections intact. This recipe makes enough of the onion salt and paprika mixture to do more wings than you will be preparing.)

Sprinkle the wings on both sides with the mixture of onion salt, paprika, salt and pepper. Put the wings in a shallow roasting pan and bake for 1 hour at 350 degrees, turning them after one-half hour. To finish the wings put them under a broiler on both sides and keep until they are crisp.

If you want to cut the drumettes from the rest of the wings and cook the two parts separately, that works well. Don’t discard the wing tips. When they get really well done and crisp you can just chew them up – bone and all. It’s a real treat.

These wings serve well hot, or at room temperature.

For a smoky flavor use smoked paprika instead of sweet and reduce the amount of paprika by half.

One great thing about these wings is that they keep and transport well.

Mom was still alive, when I devised two other recipes for chicken wings. One is for the drumettes; the other is for the center section, the part with two parallel bones. We don’t use the wing tips for either of these. But you can roast the tips and use them when making a stock.

Put the soy sauce, sherry, garlic, ginger, sugar and scallion in a glass or stainless mixing bowl and let it sit for 30 minutes so the flavors can blend. Marinate the wings in the sauce for 15 minutes, making sure both side of the wings are in the marinade.

Remove the wings from the marinade and put them in a baking pan. Bake at 350 degrees for 40 minutes, or until the wings are well browned.

Serve with the napkins.

It might be fun to make all three recipes and see which is the favorite of your guests. Or you could just pick one on the assumption that the game and the amount of beer your guests have consumed will level the playing field.