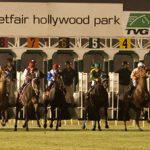 What will be my most enduring memory of Hollywood Park now that the legendary race track has closed forever? Hint: it has to do with food.

When I was in college in the 1950s, we never took afternoon classes. Afternoons were reserved for Hollywood Park, Santa Anita, the Budweiser brewery, or the beach. Seabiscuit raced here. So did Citation, Round Table, Native Diver, Spectacular Bid, Zenyatta, Seattle Slew, Swaps, Affirmed and almost every other great horse of the last 75 years.

Hollywood Park opened in 1938 under the direction of movie industry leaders Jack and Harry Warner – the Warner Bros. Through the 1950s and 1960s many of Hollywood’s leading celebrities would be seen spending afternoons in the Turf Club. Elizabeth Taylor, Jimmy Stewart. Cary Grant, Fred Astaire, Jack Lemmon, Lucille Ball and Rickey Ricardo, Jimmy Durante, Tony Martin and Cyd Charisse – they were among regulars.

I remember all those college days, when we drove to Inglewood in our old cars and parked in the free lot. We paid our entry fee but won’t think of spending money for a section that included seating. We stood by the rail and heard the thunder of hooves. Maybe we would share a sandwich if we felt flushed. My friend Stewy and I were a good handicapping team and we did alright, covered a lot of the costs of our social lives with our race track winnings.

I went to closing day at Hollywood Park yesterday. I was struck by the way Hollywood Park and I have gone in different directions. I arrived yesterday in my Honda S2000 sports car and I had a valet park it for me. I got a table in the Turf Club. From there I looked at the lakes that soon will be drained and the flowers that soon will wilt.

I stayed for only the first three of eleven races. The crowd was inflated by the significance of the day. But the race card was ordinary at best. The cloth on my table was stained and the TV monitor was broken. And this place never heard of second hand smoke. People smoking three rows in front of me drove me out of the Turf Club. I wandered around several other areas of the track, paused for a few minutes down by the rail to remember, listened to Frank Sinatra singing “I’ll be seeing you in all the old familiar places” and realized there were no horses on the card that were attractive for me.

I wasn’t enjoying myself. Jennifer and I stopped going to Hollywood Park 10 years ago. We sensed at least that long ago that there were interests more concerned with exploiting the value of the land on which the track was located than they were with upgrading the facility. The track passed between owners, each taking over with a verbalized commitment to revive the place and each moving it inexorably toward demise.

Then there was the menu. Hollywood Park restaurants once offered top notch cuisine to meet the expectations of the celebrity crowd. Sure, there were the hot dog and sandwich stations. But the various restaurants offered choice fare. The Turf Club once was filled with women in skirts or dresses and men in coats and ties. Yesterday there more t-shirts and jeans than jackets.

My first access to the swankier reaches of Hollywood Park came as a young sports writer and editor in the late 1950s and early 1960s. It was in those days that I developed a love for the Turf Club’s signature dish – short ribs. I went to the track yesterday hoping to have one last serving of Hollywood Park short ribs at the track. They weren’t on the menu.

Select meaty short ribs with as little fat as possible and trim any large pieces of fat from the ribs before cooking. Don’t buy flanken ribs because there is not enough meat on them. Some places sell short ribs as cross cut ribs.
Wash the ribs to rub off any splinters of bone. Pat them dry.
Heat the oil in a heavy Dutch oven. Brown the ribs in batches thoroughly in the oil. Pour off fat as it accumulates. Add the salt, pepper, bay leaf, onion, celery, marjoram, thyme, wine, beef stock and tomato sauce to the pot. Bring the mixture to a boil and simmer covered until fork tender – about 1 hour.
Remove the short ribs to a plate and cover tightly with tin foil to keep them warm. Melt the butter in a pan, add the flower and whisk it into the butter until the flower is browned. Stir the flower into the pan juices. Bring the sauce to a slow boil, stirring occasionally. Strain the gravy and serve it over the ribs.
Makes 4 servings.
I serve this with mashed potatoes.