ALOHA FROM KAUAI / Not all taro is poi, and that’s a good thing 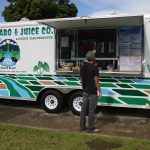 I’m sitting outdoors at the Makana Terrace at the St. Regis Hotel in Princeville this morning. I’ve ordered the Surf Omelette, even though the waiter can’t explain how bacon, ham and goat cheese adds up to surf.

I notice some drops of rain in the fountain and I say to the friendly man at the next table, “Looks like we have some rain.” That’s about as profound as things get here in muggy Kauai. He answers, “When I moved here I asked people if it ever rains. They said, ‘Oh, yes. It stops three or four times a day.”

I tell him we were in Seattle about 10 days ago and up there it stops for most of July and August but not so much the rest of the year. The state flower of Washington is mold and the days in December and January are so short that if you blink it will be tomorrow.

The sun came out for a while this morning, then the skies opened up and the rain wrecked my golf game. I was soaked but that didn’t matter. However, the course was turned into a sponge, so I picked up after nine holes.

Doesn’t matter. It’s still beautiful here; the view from our hotel window is magic; it’s mellow and I’m looking forward to everything that remains to be done – horse riding, luau, river cruise, whale watching, wading in the ocean and watching the fish swim between my ankles. And eating at several more restaurants recommended by our concierge magician Christine.

Many, many, many decades ago I tasted poi. It’s one of the famous native foods in the islands. Trouble is it’s terrible for virtually anyone but a native. It has the taste and texture might expect if eating paste. Poi really is a Polynesian food made from the corm of the taro plant. Hawaii appropriated poi from the Polynesians and no one can explain why. Taro poi is very different from the Samoan poi made with bananas and coconut, or from the Tahitian po’e which is made with banana, papaya, mango and coconut cream. Taste each of the three and there is no danger you’ll ever confuse Hawaiian poi with either of the others.

Once I tasted poi at a luau somewhere back in the first half of the 1960s, I resolved to never do that again and I resolved it would never be served to travelers at any event sanctioned by Jet Set Tours, of which I was a partner. And for all these many decades I successfully avoided not just poi, but taro also. If taro was the source of poi, then I was going to keep my distance. Until yesterday.

We had been out for a morning drive east along the north coast of Kauai. It was lunch time as we were passing through Hanalei and I spotted the Hanalei Taro Co., a truck and four picnic tables set under a canvass canopy stationed on the side of the road. The sign said “Hawaiian lunch plates.” To Jennifer’s total surprise, I pulled in.

We were studying the menu when a couple walked up and ordered two Lau Lau plates. No hesitation; they either were locals or they had been here before. “What’s a Lau Lau Plate,” I asked.

“Pork or chicken wrapped in the edible part of taro that grows above the ground,” they explained. “The taro has the texture of steamed spinach. The whole thing is wrapped in taro leafs, which you don’t eat. It’s then cooked underground over hot rocks just as you would a whole pig.”

“Is it shredded pork or chunks,” I asked, anxious to avoid anything resembling pulled pork. I’ve given up on pulled pork. It’s inevitably is dry unless it’s smothered in barbecue sauce to the point where you can’t taste the pork.

The women running the truck said it’s chunks of pork. So far so good; I love pork.

And so we did. And, boy, were we glad. Shared was perfect for lunch – luscious, tender, moist pork with big bites of fat, steamed rice, a small side of some kind of chilled pasta. From the first bite we were swooning. And so ends half a century of taro abstinence. As for poi, that will continue to remain off the charts.

I looked up Lau Lau on the internet to see if there is any way to make it at home, without the hot rocks in a hole in our backyard lawn. There is, if you can find taro leafs it can be steamed for several hours in the oven. It can be made with just pork or chicken, or it can be made with a combination of pork, chicken and one of several kinds of fish.