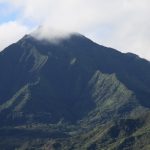 I’m very careful when it comes to ordering fish in a restaurant. I have to know the place very well. Most places overcook the fish and it becomes dry. I don’t like putting sauce on fish to get moisture because it masks the flavor of the fish.

I never order sword fish in a restaurant. I love the stuff but I gave up trying to find a chef who would cook it properly years ago. I make a wonderful, moist, Italian style sword fish at home frequently.

But this week we had dinner at Postcards in Hanalei on the island of Kauai in Hawaii. It’s a restaurant that serves only fish. It was recommended by Christine, the magician concierge here at the St. Regis Hotel at Princeville, so we charged ahead. (Just realized: concierge is an exception to the “i” before “e” except after “c” rule.)

Wasabi crusted Ahi is the signature dish at Postcards. But I can get seared Ahi at a hundred different restaurants and sometimes it’s even crusted with wasabi. I opted instead for one of the night’s specials – Hebi, a Hawaiian spear fish. It was offered either grilled or blackened. I opted for grilled because I wanted to taste the fish. I asked the waitress to ask the chef to make sure the center of the fish remained moist and I asked for the citrus sauce on the side.

One bite and I knew two things: the flavor was wonderful and the fish was overcooked. On went the citrus sauce.

When the waitress stopped at our table and asked, “How is everything”, I told her my fish was overcooked. She offered to take it back. That launched the inevitable internal debate: send it back or not. Jennifer already was eating her entre. Send mine back and she would be finished before my replacement meal arrived; keep it and give the cook/chef no reason to try harder next time. Meals returned to the kitchen hurt a restaurant’s bottom line and there is no better way to get the owner/management to pay attention. But it does create an uncomfortable dining experience. It’s one thing when it involves a couple who have been together more than 40 years; it’s quite another when it involves three or more people, or two couples out together.

I told the waitress I would keep the fish and she every effusively apologized and promised, “We’ll do something about it to make you happy” after trying to convince me to allow her to take it back.

After I finished the meal, I beckoned for the waitress to come over. “I don’t want you to take this off the bill,” I told her.

She said something that indicated very directly that was her intention.

“Then let us provide you with a dessert,” she offered.

I laughed and explained, “I very rarely eat dessert.”

“Take a look at the menu,” she said, “and see if there’s something we can give you.”

It was a very scant dessert menu and nothing appealed to me.

Jennifer interjected, “He just said he feels like a slice of Key lime pie.”

“Try the Lilikoi Mousse,” the waitress suggested. “It has the same kind of tartness as Key lime pie.”

I asked what Lilikoi is and she explained it’s Hawaiian passion fruit.

“Try this,” she insisted. “It comes with a little pineapple.”

I agreed. The small dessert cup was ringed with triangle bites of fresh pineapple. The texture was light and airy. There was a drizzle of raspberry sauce at the bottom of the cup. I tasted a spoonful and swooned, “Oh, wow.”

One meal – two things I’d never eaten before, Hebi and Lilikoi. Had I sent the fish back to the kitchen I very likely never would have gotten to taste the Lilikoi. And maybe I made my message about overcooking the fish.

(NOTE: The photo that accompanies this article was taken from the window of our hotel – the St Regis at Princeville  on Hanalei Bay. It forms the background for some of some of the scenes at Emile DeBecque’s estate in the movie version of South Pacific.)