ALOHA FROM KAUAI / and forget about the air travel 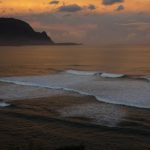 We’re going to skip the nightmare of dealing with United Airlines and having to pay an upgrade to get the first class seats for which we already had paid. I’ll deal with the airline about that when we get home.

We’ll skip talking about the dreadful food served us in first class by United Airlines. I should have known better and taken the advice of my friend and atLarrys.com co-host Larry Dietz, who brings his own food on board and passes on the airline offerings. After all, I did a whole article for this magazine in which I explored the futility airlines face in trying to serve decent food aloft.  (THE FUTILE QUEST FOR TASTY AIRLINE FOOD – https://www.tabletalkatlarrys.com/index.php/2012/05/the-futile-quest-for-tasty-airline-food-why-then-cant-get-it-right-after-78-years-of-trying/)

Once we got by those two downers, this trip to Kauai got off to a commendable start. We’re at the St. Regis Princeville Hotel on Kauai. The hotel is lovely and the views are

Dinner the first night was here at the hotel – a late dinner because we knew we would be getting in late. We dined at the Makana Terrace. It was a muggy night so we passed on the outdoor terrace and ate inside. My main course was steamed opakapaka, which the waitress said is a local pink snapper. It was topped with sautéed green onion and mushrooms and served on a bet of steamed baby bok choy and jasmine rice. A pleasantly sweet “house sauce” was drizzled over the top. I started with a really fine crispy chicken spring roll. Jennifer opened with a trio of beets and then ordered three sushi rolls from a modest sushi menu.

A couple of highlights today: we drove east along the north coast of Kauai as far as the road would allow and visited two sites at which the movie version of South Pacific was filmed. There’s nothing distinctive now about either site, but I love that show and found myself singing some of the songs. The other high spot of the day – literally – was a 45-minute helicopter trip through many of the island’s wondrous canyons and along the Na Pali coast.

Then it was dinner at BAR ACUDA in Hanalei. It was recommended by out knowledgeable concierge Christina. The menu showcases 20 small plates from olives and almonds, to shrimp and scallops and flank steak and short ribs. Well worth the visit.

This is Jennifer’s first visit to Kauai. I was here several times in the first half of the 1960s when I was a partner with two friends in a wholesale tour packaging company called Jet Set Tours. It was a time when the Jet Set meant the Kennedys and upscale Hollywood. Our company specialized in very expensive, high end Hawaiian travel. There were not many tour companies including Kauai in their packages at the time and most of what I’m seeing now wasn’t here then.