LATKES AND TURKEY/ a culinary convergence when Hanukkah meets Thanksgiving 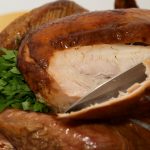 Jews in American usually get to cash in on the holiday culinary sweepstakes at least twice at this time of year. For some, who yield to the Christmas avalanche, it can even be three times. We get Thanksgiving dinner; we get Hanukkah latkes; and then there’s a Christmas tree and maybe dinner for those willing to say Christmas isn’t a religious holiday or have a non-Jewish wing of the family.

This year, however, the two holidays overlap and present an unusual opportunity for a culinary convergence. Hanukkah starts the night before Thanksgiving. That’s the night Jewish kids will get the first of their eight days of presents. Thanksgiving dinner for most Americans will come the next night – the second night of Hanukkah, which will go on for six more nights after Thanksgiving. By the time it ends, most Americans, who haven’t been trampled in “Black Friday” sales crowds – including a stunning number of Jews – will be in all out Christmas mode.

The convergence of Hanukkah and Thanksgiving in this way is unusual. Many non-Jews think Hanukkah is the Jewish equivalent of Christmas because most years it falls completely within December, although never as late in the month as the 25th.

While this convergence is of no consequence at all in the Jewish religion and of little consequence to any Jews for other than culinary reasons, the media always is looking for a fresh angle. This convergence of holidays would provide them with a field day if it weren’t for the fact that the 50th anniversary of the assassination of President John F. Kennedy falls just six days before Thanksgiving. But never fear: once the anniversary has past we can expect six days of TV interviews with Rabbis and other Jews seeking to learn “how do you feel about this coming together of these two important holidays.”

It was still October when I saw a newspaper column exploring how the two holidays align not just in time but in theme. Jews are giving thanks that a tiny amount of oil burned for eight days; America is giving thanks that a bunch of native Americans (formerly known in history books as Indians) fed the Pilgrims roast turkey, sweet potatoes, yams, pumpkin pie and other delights that have been imposed on history. Others are pointing out that both holidays celebrate journeys from religious oppression. Fair enough.

What creates this unusual situation is that Thanksgiving is an American holiday fixed on the Gregorian calendar. Hanukkah floats around the “American” calendar because the Jewish calendar doesn’t sync up with the calendar by which we live our everyday lives. The timing of Hanukkah is dictated by the Jewish calendar, so the holiday can fall anytime from late-November to mid-December, while Thanksgiving holds perfectly still.

What’s amusing about this whole thing is that despite the media’s obsession with the convergence, it exists only in the loosest possible sense. Hanukkah begins this year November 27; Thanksgiving is November 28. It’s only because Hanukkah has an eight-day run and that Jews have this habit of starting their holidays at sunset on the day before the first day of the holiday that the two holidays overlap at all. Would we consider it an overlap if Hanukkah started on the 26th and Thanksgiving was the third day of Hannukah? Would it work no matter which of the eight days of Hanukkah happened to fall on Thanksgiving? When calculating the last time “it happened” or forecasting when it will happen again, what parameters did the forecasters use?

It’s not my intent here to spoil anyone’s fun. Personally, I enjoy Hanukkah for the latkes and Thanksgiving for the roast turkey. Why I don’t make latkes any other time of the year is easy to explain. They’re fried in oil and I’m on sort of a post coronary bypass diet. Why I don’t make turkey the rest of the year is equally easy to explain. Ever try to get a really great bird in August?

When all is said and done, this year’s convergence of holidays offers American’s a chance for a unique cross-culture culinary experience – latkes and turkey. Yep. For this year at least let’s put away the sweet potatoes and yams and make latkes the starch on the Thanksgiving table. And let’s let Turkey replace brisket as the protein on the plate with the potatoes.

THE MENU
I’m starting with potato latkes because I figure most people have their own way of doing a turkey. Latkes? Not so much.

Each year at Hanukkah my father would get out the old box grater and set to work hand-grating potatoes and onions. Mom would peel the potatoes and put them in cold water to keep them from discoloring until Dad could get to them.

I tried it that way once after Dad died. Then I remembered my blender has a “grate” button. I quickly discovered I had to add water to the blender bowl to keep things moving. The grating went well, maybe a little finer than the coarse grating dad once did, but a whole lot easier. I just had to drain the water.

POTOATO LATKES
1 lb. russet potatoes
1 medium brown onion
1 large egg, lightly beaten
Matzo meal as needed
¼ tsp salt
¼ tsp black pepper
Vegetable oil
Peel and grate the potatoes – either Dad’s way by hand, or in a blender. Put batches of grated potatoes in cold water as you go to prevent them from discoloring. When all the potatoes are grated, let them soak in the water about 2 minutes, then drain them well. Grate the onions and stir them well into the potatoes in a mixing bowl. Stir in the egg.

You are going to want the mixture to be moist but not runny. If it’s too watery mix in some matzo meal until you get a consistency that will stand frying without falling apart. You don’t want it too dry, either.  Stir in the salt and pepper.

Heat ½ cup of oil to medium high in a wide frying pan. Don’t let it start to smoke.

You will want about 2 tablespoons of the potato mixture per latke and you will want the latkes to be fairly thin. Reduce the heat to medium. Put the mixture into the hot oil and flatten into rounds of about 2 ½ inches each. Fry until the undersides are browned and crisp – about 7 minutes. Turn the latkes over and fry until the second side is browned – about 7 more minutes. Remove the latkes from the pan and place them on paper towels to drain the oil. Add more oil to the pan if needed and skim off fried bits left in the pan before adding more of the latke mixture.

To keep latkes warm while making additional batches, after they are drained on the paper towel, put the latkes on a wire rack in a shallow baking pan and put them in a preheated oven at 250 degrees.

Serve with apple sauce and/or sour cream, or just serve the latkes as a side with the turkey.

I love turkey and don’t like the flavor disguised. So, I just give it a very basic roasting and let the gravy and sides do the rest.

Allow about 1 pound per person, or just get a great big bird and plan to have turkey gumbo, turkey soup, turkey enchiladas, or hot turkey sandwiches with gravy and mashed potatoes with whatever is left over.

ROAST TURKEY
Pre-heat the oven to 325 degrees. Remove the heart, liver, gizzard and neck from inside the bird. (Save them for other uses, like making stock or feeding the cat.) Wash the bird inside and out with cold tap water. Cut away all large chunks of fat, including the butt, which you should throw away. Cut away excess flaps of skin.

Pat the bird dry with a paper towel. Place the bird on a rack in a shallow roasting pan breast side down. Tent the bird with tin foil, being careful that the foil doesn’t touch the bird. Put the tented bird in the oven for the time shown on the chart below.

One hour before the turkey is done, remove it from the oven. Place the turkey on a large platter. Pour the drippings from the roasting pan into a 1 quart measuring cup, or some other deep vessel. Return the turkey to the rack, this time breast side up. Be careful; there will be a tendency for the bird to want to break apart. The best way to turn it is not from the ends, but by using oven mitts and gripping the turkey from the sides. Place the tent back over the bird and return it to the oven.

When the bird is done, remove it from the oven, remove the tent and allow the bird to set for 15 minutes before carving.

DRIPPING GRAVY
3 cups turkey stock (which you should have made ahead of time)
¼ cup vegetable oil or butter
Turkey pan drippings
½ onion – diced
Salt and pepper to taste
½ cup all-purpose flour
Some of the fat skimmed from the drippings
Skim the fat from the drippings. About 1 ½ hours before you will start carving the turkey, heat the turkey stock to medium-low in a sauce pan. (Don’t boil) When the stock is heated, turn the temperature down to low.

Heat the oil or butter. Stir in the onions to coat. Cook until they just start to brown. Stir in the flour and let it brown, stirring to keep it from sticking. Stir some of the warmed stock into the onions and flour. Add more stock in small batches. Stir and allow it to thicken after each addition. When about half the stock has been thickened, slowly pour it into the stockpot, stirring constantly to incorporate fully. Bring the stock to a very slow boil and stir occasionally until thickened. Stir in the fat-skimmed turkey drippings and heat through. (Don’t boil.) Taste the gravy and add a little salt if needed. Also think about adding some freshly crushed black pepper, and maybe a little dried sage or oregano.