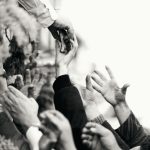 There are times when food writing intersects with public policy and politics in a way that makes it difficult to write about great restaurants, new recipes and self-indulgent browsing in artisan food stores, times when things happen that shake us out of our comfort zone. Today we stand at such an intersection.

I was prepared to publish an article today about the conjunction of Thanksgiving and Hanukkah later this month. It was going to be fun and informative and include recipes for roast turkey, side dishes and potato latkes. That will have to wait a few days.

Today we must recognize there are millions of people in our nation who will not be eating turkey this Thanksgiving because they can’t afford to buy turkey. They may be able to buy potatoes, but probably not some of the other ingredients for really great latkes. They are people who depend on food stamps to feed themselves and their families.

For 48 million of those people across our nation, mostly children, the elderly and people with disabilities, this holiday season will begin with an act of inhumanity on the part of the U.S. Congress.

The national program known as the Supplemental Nutritional Assistance Program (SNAP), which was enacted by Congress in 2009 as part of the economic stimulus package, expires tomorrow (Friday, Nov. 1, 2013). For a family of four, living on food stamps, it will mean the loss of $36 a month in benefits. That’s the equivalent of 21 meals a month, according to the U.S. Department of Agriculture, which runs the food stamp program.

Can a nation call itself great when it tolerates this level of poverty, when it hands scraps to the needy then takes away some of those scraps, when it allows its leaders to act this way with hardly a whisper of protest? Can a people call themselves humane and compassionate, when they provide a pittance to the poorest and feel good about it, while at the same time shrinking from the real challenge of eliminating poverty and assuring that all people can live with a measure of dignity? Can a nation that fosters public poverty and private shame call itself moral or just?

Across this nation tonight millions of households will hand out more than $36 dollars in Halloween candy to trick or treaters. Tomorrow, as the SNAP benefits vanish, some members of Congress will spend more than $36 for drinks before they even order lunch. They will be the same members of Congress who refuse to extend the SNAP benefits, or vote for the job-training and education funds that can move people out of poverty, or increase the minimum wage and help some people become less reliant on things like food stamps.

No. Instead Republicans in the House of Representatives, on a purely partisan vote, approved a measure that would cut benefits by an additional $40 billion over the next 10 years. Have they no shame, no compassion, no morality? To them I say: let your family skip 21 meals in the next month and try to feed themselves on $1.71 a meal the rest of the month; walk in the shoes of those who suffer at your hands.

The solution to our national shame of hunger and poverty cannot be a never-ending public dole. Instead, it must be a national resolve to end hunger and poverty not through financial assistance programs but with a resolve to give every person the ability to earn a fair wage to support themselves and their families.  As a nation we never have adopted or acted upon such a goal. Instead, we smugly pat ourselves on the back for giving minimum handouts to those in need and then we look the other way when those handouts are reduced. Until we change this we cannot call ourselves great, or exceptional, or even worthy.