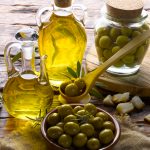 Next time you head for the market to buy extra virgin olive oil, remember this: the adage “you get what you pay for” never is more true than when it comes to olive oil.

Buy the inexpensive bottle and you very likely will get some adulterated concoction that is cut with peanut oil or some other low grade additive. Even middle to high range pricing doesn’t guarantee the quality of the product.

In this fascinating and informative book, Tom Mueller lays bare the corruption in what he calls one of the most corrupted and corruptible segments of the food industry. The revelations are enough to frighten any of us who believe in the health benefits of olive oil.

From the crush at many groves, to the industrialization of the product and the final marketing, the olive oil business is rife with evil actors. Mueller exposes many of them and reveals the ways in which they are bilking the consumer.

In one of his more startling revelations, Mueller writes “smelly, rancid, and downright fake olive oils are everywhere, from corner pizzerias to top restaurants.”

As I read the text, I recalled some of the olive oils served for dipping and various restaurants and understood why I pushed many away after one dip.

But this book is far more than just an expose. After scaring the pants off of us, Mueller tells us what to look for in labeling, hints as to how to separate the good stuff from the rest. Sure, if someone wanted to go far enough they could phony up a label and outright lie about what was in the bottle. They might risk law suits and fines. They also might look at those as just part of the cost of doing business and build those costs into the price of the product. There is no way to be absolutely certain unless you grow and press your own olives. But we have to trust someone and Mueller offers a guild for knowing where to place our confidence.

All this would make a very good magazine article, but not a book. As a matter of fact, Mueller, who lives in a farmhouse surrounded by olive groves in the Ligurian countryside outside of Genoa, Italy, developed the book from an article he did for The New Yorker several years earlier.

The book gains its depth and texture from Mueller’s writing of the rich history of olive oil and from his stories of the people who grow the olives, press the oil, monitor the industry, and work tirelessly to protect the integrity of the product.

Did you know Roman gladiators smeared their bodies with olive oil before entering combat? Did you know the original Hanukah oil was olive oil? Did you know olive oil has been used as the base for perfumes, fragrances and body lotions for thousands of years? Mueller goes into all these and other fascinating facts about the centuries-old relationship between humans and olive oil.

My son Lloyd and daughter-in-law Edie gave me this book as a gift. At the same time, they gave me a bottle of the Australian Cobrari extra virgin olive oil that had won an international tasting in Los Angeles in 2012. The first time I used that oil I wiped the rim of the bottle and licked the oil from my finger. In an instant I understood everything Mueller was telling me in the book.

Italian children have been known to drink a shot of olive oil every morning. One taste of the Cobrari extra virgin and I understood why and how. It was delicious. The best olive oil, according to Mueller, will leave a burn at the back of your throat after you’ve swallowed it.

Back to the notion of great olive oil from Australia. I had always through of olive oil as a product of Italy and Spain. Not so. Quality extra virgin olive oil now is produced in virtually every part of the world. Mueller traces the history of how that came to be and he discusses the comparative tastes and quality of oil from different types of olives grown in different areas.

Today, olive oil has begun to take on the aura of quality wine, with formal tastings rooms and competitions. Now that I know more about this complex and exciting product, I’m going to start popping in at some of these events. The Culinary Institute at Greystone in the Napa Valley has a fairly large olive oil tasting facility.

For all the information imparted in this book, it would be worth it if there were nothing but the final three sections. One explores the mythology of extra virgin olive oil (think about extending an olive branch, or the bird heading for Noah’s arc with an olive branch in its beak); the second is a glossary of terms (what is extra virgin or cold pressed). Each of these is a valuable guide to aide shoppers in deciding what oils to select. The third section is and appendix titled “Choosing Good Oil.” Enough said.

(NOTE: After finishing the bottle of Cobrari, I went back to Corti Bros. in Sacramento, the wonderful market at which Lloyd and Edie purchased the bottle for me. There was no more in stock and attempts to track down some online came up empty. Corti Bros. was offering several other quality olive oils. I bought a bottle of Torre/Bianca. The hand written date of the crush is June 30, 2013. Contrary to good wine, olive oil is best tasted young. I learned that from Tom Mueller.)