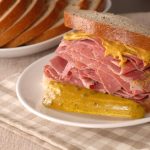 Even though I knew the Manhattan deli world was in dire straits a decade ago, I held back on the final pronouncement until today.

No, I haven’t tried every deli in the city, so I expect I will be challenged. But I have tried all of those that draw the highest rave ratings at Yelp and Zagat’s and those most frequently recommended by people who live here.

Let’s be clear: anyone over 60 years old will preface a deli recommendation with, “You aren’t going to find any like the ones we knew in the 1940s or 1950s, but …” and then they go on to tell us what to try today.

We gave up on the Stage Deli a decade before it blissfully closed last year. Carnegie Deli may be the most famous deli in New York. But we quit on that one a decade ago, also.

Katz’s and Wolf’s? Faded starts that have outlived their reputations. Barney Greengrass? A ghost of its former self. The hottest of the new places – Mile End? It’s in Brooklyn and the laudable meat is Montreal style smoked meat. Good, but not honest Kosher, Jewish pastrami.

David Sax does an excellent job of explaining the decline of good deli, not just in New York but across the nation, in his “Save the Deli”, which is reviewed at this online food magazine:   (https://www.tabletalkatlarrys.com/index.php/2011/05/1259/). He traces the history of kosher deli from “the old country” to the U.S. and Canada and he offers insightful observations about the fading quality of deli in America. For example, in trying to find a photo to illustrate this article is went to my favorite stock photo source and asked to see samples of pastrami sandwiches and corned beef sandwiches. Something eclipsing 95% of the photos offered had cheese and/or clo

The last straw for me was lunch today. I resisted a final pronouncement regarding the death of New York deli until I could give 2nd Avenue Deli a chance to redeem the city. It failed. Miserably. I ordered corned beef on rye because the menu said they smoke their own corned beef. It advised not to ask for it lean or extra lean. So I didn’t. The rye bread had all the character of a super market package of Oroweat. The corned beef was dry and had no distinctive flavor.

Jennifer ordered tongue on a Kaiser roll because the menu said they smoke their own tongue. It also said the end cut is leaner and tends to be drier, so she ordered the center cut. The roll kind of resembled a Kaiser roll if you suspend your dis-belief and the tongue was cold and virtually without flavor. Who serves cold tongue in a deli? I sampled a slice of tongue without the bread and still could find no flavor.

The side of potato salad was pretty good; the pickles were … well, they weren’t kosher dills. Best thing about the meal was the Dr. Brown’s cream soda.

So, that’s it for me and deli in New York. It’s part of history, a memory from the days when I worked with my father on his home delivery seltzer route and we would stop at neighborhood delis for lunch in many Brooklyn neighborhoods.

The clear championship deli capital of the U.S. today is Los Angeles. That may seem like faint praise in view of the fact that New York no longer offers competition. Zingerman’s in Ann Arbor Michigan is a worthy contender when it comes to sandwiches, offering up a respectable corned beef on rye and a world class pastrami on rye. The bread is unsurpassed in my knowledge. But Zingerman’s doesn’t offer a full deli menu.

For that you have to land in L.A. I’ve said it before and I’ll say it again here: Brent’s in the Northridge area of the San Fernando Valley in Los Angeles probably is the best deli in the U.S. today. Art’s in the Studio City area of the San Fernando Valley might make a valid claim to that title if it weren’t for nearby Brent’s. Call me fortunate, but each of these delis is within 20 minutes of my house.

It isn’t that L.A. doesn’t have its share of over-rated delis. The internet is rife with adoration for the pastrami sandwich at Langer’s near downtown L.A.  But that isn’t even the number one selling sandwich at Langer’s. That would be something called the Number 19, which is pastrami, with swish cheese, cole slaw and Russian “style” dressing. Under all that, any taste of the pastrami is hardly detectible. I’ve ordered pastrami on rye without all the extras; I’ve been able to taste the pastrami; it’s just kind of ordinary. There must be a thousand restaurants with web sites that proclaim they have the best pastrami in the world, including Langer’s. Sorry: Brent’s is better; Zingerman’s is better.

The other great L.A. deli myth is Canter’s. The reputation, which probably never was deserved, is left over from the time when the Fairfax area in which it is located was the Jewish heartland of the west. From the first time our family visited Canter’s after we moved to L.A. from Brooklyn in 1949, we thought it was just so-so. We preferred some of the delis in the Boyle Heights area. Those are all gone now as the population shifted from Jewish to Latino.

The best word to describe the state of Jewish delis, kosher or not, across the nation today is grim. Founder Ron Peskin still is overseeing the two Brent’s locations, although his children are playing an increasing role. Operation of Art’s deli has transferred to the children of found Art Ginsberg. So, for now these two places seem to be in good hands.

As for me, I’m giving up on my quest for acceptable deli in New York. It’s dead and it isn’t coming back. As David Sax explains in his book, the wonderful era of great deli passed as the Jewish population disbursed and the children of that era became more health conscious. Instead of fat on their pastrami, they want Russian dressing.