TRAVELS WITH JENNIFER AND LARRY / Chapter 7 – Sandwiches, sushi and ice cream in Philadelphia 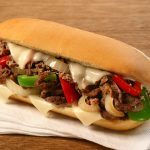 Before getting to the food adventures of our time in Philadelphia, I want to devote some time to a little introspection and social commentary.

I’m trying to figure out why I had no emotional reaction to the Liberty Bell and Independence Hall.

When we visited the revolutionary war sites in Boston, I was chocked up, tingly and teary much of the time. I stood in Faneuil Hall and imagined I could hear the great speeches echoing off the one remaining original wall. We walked the Freedom Trail and I recalled all I had learned in school about the champions who led the United States to independence.

I expected the same kind of emotional reaction to Independence Hall because of my life-long reverence for the Declaration of Independence. No surprise that I didn’t react to the Liberty Bell. It really is nothing more than a footnote in history. Had it not cracked I doubt anyone would care where it is today.

But standing the in the room where the Declaration of Independence was signed, why was I not feeling something? The words: “We hold these truths to be self-evident, that all men are created equal, that they are endowed by their creator with certain inalienable rights, that among these are life, liberty and the pursuit of happiness.” This was the room in which those words were put down on paper and signed as one of the clearest calls for justice in the history of man.

But wait, it was in that same room several years later that a constitution was written in which blacks were defined as four-fifths of a person and women were not granted the right to vote.

This is a food magazine and I don’t want to get into a long discussion of social issues. But we were in Philadelphia, at the sight of something that has been meaningful to me since I started a scrap book of the great speeches of the revolutionary period in the fourth grade.

I wondered: is the Liberty Bell nothing but a metaphor for a flawed nation? Are the self-evident truths a goal to which we should aspire but one we never have reached and which millions among us have never understood? As a nation we institutionalized discrimination against black, Jews, Latinos, gays, Irish, Italians, women and an array of others? How self-evident were those truths.

I’ll spend a lot of time thinking about these things in the weeks and months ahead and discussing them with trusted friends and relatives. I’ll welcome input and thoughts from any and all who wish to offer them.

I also will spend a lot of time remembering our Philadelphia food experiences.

MORIMOTO – We had eaten at the Iron Chef’s restaurant in New York a few years ago and I was looking forward to dining at his original restaurant in Philadelphia. The two hardly could be more different. New York is quiet and sedate, the food straight forward, mostly traditional and delicious. The Philadelphia restaurant was noisy, more open and warmer in style and played the most annoying music imaginable. As for the food: I ordered the eight-course omakase priced at $120. The first four courses were “cold” – a toro tartare in some kind of sauce, three oysters in different dressings, tile fish in another sauce, and Thai snapper, again in a sauce. All four dishes were overly prepared – so fussy that the preparation overwhelmed the taste of the fish. The two hot courses were wagu beef from Idaho, not Japan, and half a Maine lobster that was so heavily seasoned and spiced that I could hardly taste the actual lobster. Course number seven was the sushi – five morsels that were too small to be called pieces. Perhaps, had I never eaten in the New York version of Morimoto, I might have found the Philadelphia rendition more acceptable. But by comparison, it failed terribly. Morimoto has a place in the Napa Valley. I will try to get to it this summer. However, I’m expecting it to be more like Philadelphia than New York because of where it is. Perhaps the Iron Chef has become so enamored with being an Iron Chef that he’s forgotten that the essential element of a sushi dinner is the pure, fresh taste of the fish.

READING TERMINAL MARKET – Remember playing Monopoly? Remember the four railroad properties, particularly the Reading Railroad? (It’s pronounced Reding, not Reeding.) Well, this building was owned by the Reading Railroad. Inside the massive shell some 150 vendors operate every day. There are food booths of almost any ethnicity imaginable, produce markets, fish markets, meat markets, cheese markets and just about anything else one might want. I was in a daze at what was on offer in the meat and fish cases. Enough different kinds of fish to eat for at least a month without repeating anything. My imagination ran wild thinking of the dinner parties I could host if this market were someplace near where we live. I could make big pots of gumbo with fresh craw fish. I could serve skate wing at home. Chicken feet all year long for my chicken soup. Endless possibilities.

SRAPPLE – The Terminal Market was one of our priority stops because Johnny Apple, the late New York Times food writer, once wrote of the scrapple at the Down Home Diner. But when I looked at their menu before being seated I did not see scrapple. I asked and was told they stopped serving it several years ago. Scrapple is a Philly tradition. At least it once was. We saw a slab of it in a butcher’s case at Terminal Market, but we never saw it on any restaurant menu. Scrapple is one of those things you should eat and never ask what it is. Think of all the different parts of a pig you find in your butcher shop. Now think of the parts that are left over – that you never see in the butcher shop. Scrapple is all of those left over things ground up and formed into a loaf. We left Philly with me still never having tasted it.

SAUSAGE SANDWICHES –Most of the scores of food stands at Terminal Market were fairly busy at lunch time. We were there mid-day on a Thursday. One, however, Tony DiNic’s was busier that any three others combined. Pork, beef, brisket and Italian sausage sandwiches – that was the entire menu. Sweet or hot peppers were available. The counter was full and there were people standing behind every seat waiting for an opening. So, Jennifer grabbed a nearby table and I stood in line to get our sandwiches. We each had a hot Italian sausage sandwich on a very good foot-long roll. The sausages were excellent. I had hot peppers on mine; Jennifer had the sweet. Later we realized our mistake: we should have gotten two different kinds of sandwiches and shared. But we both suffer from the same compulsion when there is a sausage in the area.

CHEESE STEAKS – Johnny Apple scored again with his recommendation of Jim’s Steaks on South Street for cheese steak sandwiches. I told the Red Cap at the railroad station where we had gone for cheese steaks sandwiches and he said it’s the only place he goes. I couldn’t make myself have it the purist way – with cheese whiz. Instead, I had it with provolone. Another top notch sandwich on great bread. I wish the peppers had been hot instead of sweet. The sandwich put me very much in mind of the Italian beef sandwiches I ate in Chicago. If I had to pick between them I’d pick the Chicago version. But I don’t have to make the choice. I know where I can get authentic Chicago beef sandwiches in L.A. but I don’t know of a good Philly cheese steak.