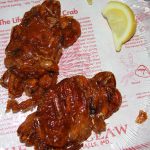 It has all the earmarks of a great season. We had just crossed the mid line of May and I already had eaten six Maryland soft shell crabs, cooked four different ways in four different restaurants.

And what is more, none of them were the way I’ve become accustomed to eating them at Wolfgang Puck’s Chinois on Main in Santa Monica CA. That still lies ahead after this east coast vacation.

I had been planning for month to fill up on soft shells during our trip to Chesapeake Bay. The timing was perfect. The season would be well under way by the time we arrived at St. Michael’s MD.

My first softy of the year was a complete surprise. I ordered omakase at Asanebo, the outstanding sushi restaurant in Studio City CA. Macha served me a soft shell without even asking if I liked them. It was sensational. Sautéed.

Soft shells at Chesapeake Bay have been a target since Jennifer and I cancelled a trip a few years back.

My focus for the North Carolina segment of this trip had been barbeque. But we were hungry when we checked into our hotel in Nags Head on the Outer Banks and the hotel clerk recommended Mulligans, just a mile or so up the road.

The words “soft shell crabs” leaped off the menu page under the heading of sandwiches. So, I asked the delightful waitress how they were prepared. With some disdain, she offered that soft shell crabs must be battered and deep fried, never sautéed. Her exact words: “Some people think they can be sautéed; but not here.”

Sautéed was the only way I ever had eaten a soft shell crab before that day. Then I discovered the joys of a heavily-breaded, deep fried crab on a bun, with lettuce, tomato, onion and tangy mayonnaise. It was accompanied by fabulous coleslaw, with just a hint of mayo. I can’t say the flavor of the crab came through particularly strong, but overall it was a taste and textural symphony.

But nirvana still called to us from Chesapeake Bay.

Three nights in St. Michaels, six soft shell crabs and two different restaurants. The stuff of dreams. Despite the temptation to deviate one of those three nights and have blue crab, I held true to the original plan.

First night I got my sautéed crab. It was OK, but a bit too heavily dipped in batter. Next two nights were winners – lightly dipped and wonderful even though they were deep fried. They held together perfectly on the plate and the taste and texture were true.

While I was at it, I discovered a beer I’d never tasted before. It’s called Yuengling – an amber lager produced in Pottsville PA at America’s oldest brewery, founded in 1829. Perfect with barbeque or soft shell crabs.

Soft shell crabs are not a species unto themselves. In the U.S. they mostly are blue crabs, but can be other kinds. A soft shell crab is one that gets too big for its shell, molts and will grow a new shell. For about two hours the new shell remains soft enough to eat and that’s when the crabs must be taken. Crabbers harvest blue crabs and put them in floating holding tanks, separated by the expected shedding dates.

The molting season generally begins with the first full moon of May and runs through October. Soft shell crabs are a cleaner eat with less work than most shell fish or bottom feeders because they stop eating three days before molting. That produces natural cleansing of the digestive system.

While Maryland produces the most expensive and highest quality blue crabs, North and South Carolina and Louisiana also are sources. Maryland’s waters are colder and the crabs grown there contain fat with more flavor. The Maryland state legislature this year voted to make soft shell crabs the official state sandwich.

When it comes to my love of soft shell crabs, this trip certainly has lived up to the old adage about travel being broadening. To test myself I will be off to Asanebo and Chinois on Main to get re-acquainted with the soft shells to which I’ve been accustomed soon after we get home. They won’t need to be better than the ones I had on the east coast; they just have to be good. I’ve learned that when it comes to soft shell crabs, the best one is the one on the plate in front of you.