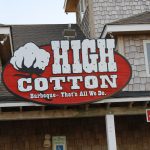 No, it isn’t the hot dog or the hamburger. It’s barbecue – also known as barbeque, BBQ, or just plain Q.

There is virtually no corner of the U.S. that doesn’t have its own style of BBQ, and within each regional style there are sub-regions and as many variations as there are pit masters and back yard grillers.

It’s said of Italy that all food is regional. The tortellini en brodo you’ll find in a restaurant in Bologna isn’t found anywhere else; the crudo grade prosciutto d ’Parma served in Parma isn’t exported beyond the city limits.

The same can be said of BBQ in the U.S. Barbecue is all-embracing; it can be pork, beef, chicken, lamb, even mutton. It can be spicy, or sweet, shredded or sliced. It all depends on the region of the country, the locale within that region and the preference of the individual pit master.

I’ve been anticipating North Carolina BBQ for years. I’ve read about it in books and magazines, heard it hailed on the Food Network, had friends swoon over it. But I’d never tasted it. We have so-called Texas BBQ in and around Los Angeles; we get St. Louis style ribs; I know of a Memphis BBQ joint, even a Kansas City Q house. But no North Carolina. So, as we drove north after our visit with relatives in South Florida my nose was aimed directly at the goal of North Carolina barbeque.

We were at the Outer Banks, as far east as one can get in North Carolina without a surf board. I asked the hotel desk clerk to recommend a good place for local Q – almost always a good idea. She said High Cotton. Later, I asked the hotel manager the same question. It’s a personal rule of mine: don’t trust the taste of one total stranger. If two agree without consulting, you have your answer. If they disagree, ask more people. This time the first two gave us the same answer – High Cotton in Kitty Hawk, about 12 miles north of where we were staying in Nag’s Head.

Score one for local knowledge. I ordered a full rack of St. Louis cut ribs. (St. Louis cut is almost perfectly rectangular and cut from the full rack of spareribs.) For the two accompanying sides I selected baked beans and fried okra. Jennifer ordered brisket, with sides of Brunswick stew and a concoction called bacon wrapped cabbage.

Brunswick stew is a tomato based dish that may contain any combination or all of butter beans, corn, okra, potatoes and some kind of meat. Originally that meat was either squirrel or rabbit. Today it’s usually chicken. There are as many versions of Brunswick stew as there are cooks in the kitchen and each cook is likely to turn out his or her own variations depending upon what’s available in the market. Just think of a very thick bowl of vegetable soup, nicely spiced. The bacon wrapped cabbage was chopped bacon and cabbage wrapped it in tin foil and cooked it in the smoker.

I applied a moderate coating of the local sauce to my High Cotton ribs and went to work. Jennifer’s brisket came already sauced, but she added more from the bottle on the table. The cabbage side – a special and not on the menu – was so good she ordered another portion after she finished her entre.

Was is better than the Q we get at Gus’s in South Pasadena CA? Not really. Different, but neither better nor worse. Why would it need to be? Good is good and the propensity of food writers and magazines to proclaim “the best” of anything drives me crazy.

The meat at High Cotton and Gus’s is equally wonderful; the taste is different because of the method of smoking and the sauces are different. I enjoy each of them and would look forward to eating at either one again and again.

Of course, I would say that about virtually any BBQ I’ve eaten at specialty restaurants in the last 60 years. Tyler Texas Q is distinctive and wonderful. Same for Q in New Orleans and South Los Angeles. I don’t have a favorite style of BBQ, a favorite rub, a favorite wood for smoking or a favorite sauce; the best one is the one in front of me at the moment. (I’m leaving out consideration of the big BBQ chain restaurants that dot the map; most of them are OK – if the real thing isn’t available.)

We did have one disappointment on this trip. It was the result of a recommendation by a hotel clerk, our own limited knowledge and my failure to secure a second opinion. We went to a BBQ place in Wilson NC, ordered a plate of Q and were served very dry pulled pork. That was the only thing on the menu. BBQ at Palmer’s means pulled pork. However, the Brunswick stew was excellent.

Barbeque is a method of cooking, not a specific food or dish. It involves cooking for a long time at low heat in smoke from a wood fire. Within those parameters, almost anything goes. At High Cotton I had pork and Jennifer had beef. Chicken also was on the menu. Some places offer beef ribs as well as pork ribs. There are dry rubs and wet rubs that are the personal creations of the chef, as are the sauces. The smoking might involve hickory, mesquite, pecan, oak, maple, alder, apple, pear, or cherry wood.

Chefs will create sauces that range from sweet to fire hot. Sauces may use a variety of vinegars, tomatoes, molasses, or mustard in varying proportions. Some chefs will marinade the meat in a sauce before cooking. Some will create a dry rub of salt and spices to coat the meat and let it set for hours before smoking and then use the sauce as a finisher. Less common are wet rubs.

If you need proof that BBQ is America’s food, think of what happens in back yards across the country between Memorial Day and Labor Day. They are called BBQ parties, but more accurately they should be called grilling parties. Simply buying a high-priced device that’s sold as a BBQ does not a BBQ make. Millions of Americans will cook hot dogs, hamburgers, chicken and maybe even ribs or steaks on those devices. Those meals will not be slow cooked in smokers. But America’s romance with Q is such that we call these events back yard BBQs and no one argues.

Real American BBQ had its birth in the southeastern states and spread from there as professional and amateur chefs migrated north and west. They took their personal styles with them, adapted to local tastes and watched imitators evolve new mutations.

Best known of the regional BBQ styles are Memphis, Carolina, Kansas City, and Texas. Each of these evolved from the original Q created in the south and as we’ve seen, there are variations within these.

California BBQ is derived from the buried cooking traditions of Native Americans and techniques rooted in Spain and Mexico. Santa Maria BBQ, developed in the Central Coast city of the same name, brought tri-tip beef rump to the table in place of the brisket used elsewhere. It has been lauded and copied by home cooks throughout Southern California.

Further cementing BBQ’s position as America’s food is the vast number of local, regional and national BBQ competitions. What other food or style of cooking draws 500 teams to compete in something called The American Royal World Championship? The Kansas City Barbeque Society sanctions some 300 Q contests each year in 44 states. They are open to all styles of BBQ, not just the KC style.

As Americans have embraced the foods of other nations and cultures, the influence of our love of BBQ has been apparent. We consume Jamaican jerked dishes, Japanese yakitori, Korean BBQ, Indian satay, Mongolian BBQ, Pakistani tandoor. All are commercial successes. But no southern BBQ purist would call any of them BBQ.

When it comes to BBQ, southerners will argue passionately in defense of their own unique styles, tastes and methods. They will develop original smokers out of old boilers or almost anything else at hand and travel far and wide to compete for prizes and glory. But they all will agree: what happens in back yards on Memorial Day, the Fourth of July, Labor Day, and just about every weekend in between is not truly barbeque, or barbecue, or BBQ, or Q; it’s grilling. We just call it barbeque because that’s America’s food.