TRAVELS WITH JENNIFER AND LARRY / Chapter 1 – in Florida 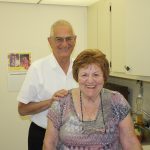 With Aunt Tillie in her kitchen in Pembroke Pines, FL

I realized something yesterday. It’s something I probably felt it for a long time, but it didn’t surface until now: the vacation doesn’t start until the plane lands, and you are in the rental car leaving the airport.

No, this is not going to be another sentimental rant about how much fun flying once was and what it has become today, or about the dismal quality of airline food. It’s just a recognition of how long it takes for some things we know to become apparent to us.

That said the vacation has started – if being in Florida can be considered a vacation.

Florida is a swamp with a space center. It’s a place where several tomato farmers were convicted of slavery within the last decade and no one seemed to be too upset about it. It’s a place where a Presidential election was stolen … where haute cuisine means the early bird special … where people who cursed the humidity all their lives in New York retire to near tropical humidity … where oranges are grown not to be eaten but to be turned into frozen, concentrated, or containerized juice … where alligators hide in the bushes alongside golf fairways … where tomatoes are sent to market with eight times the pesticide as the tomatoes grown elsewhere … where the mosquitos need flight control officers to avoid colliding with airliners … where there are insects that don’t exist anywhere else …

Florida is a place I visit only to see relatives. That’s what we’ll be doing for six days and we are glad for the opportunity. Those relatives start with my Aunt Tillie, my late mother’s younger sister. That we can still visit Tillie and spend time with her is a wonder. Her heroic survival generated headlines around the world and is chronicled in my food memoir, COOKING FOR A BEAUTIFUL WOMAN. (see link below)

Arrival day always means dinner at Tillie’s and last night was no exception. At the age of 96 she still set a full table for Jennifer and me, my cousin Irwin and his friend Lana. For starters she produced one of her very special treats. Tillie calls it antipasto; Irwin gives it a Yiddish name – Michal (pronounced Mykal, not Michael. Michal translates loosely to good for the belly).

There is no recipe but here’s what you do: gather together five or six (or seven or eight) small tins of anchovies in olive oil, one pound jar of fire roasted pimentos, a 14-ounce can of pitted black olives, a hefty amount of garlic sliced very thick, a lot of finely chopped white onion, some white vinegar and some vegetable oil. Extra virgin olive oil is too strong a flavor. So use plain olive oil or some other kind of milder flavored oil. Put everything into a large glass bowl, using just a little of the oil from the anchovies and the juice from the olives and pimentos. Mix it together well. Taste the juice and adjust the amount of vinegar and oil until you have it how you like it. Cover it and put it in the refrigerator for several hours; the longer the better so the flavors can meld. Serve it with French bread for mopping up the juice.  This is a dish that Tillie picked up from her mother, my grandmother, who brought it with her from Rumania in the late 1800s.