A QUICK DIP INTO THE WORLD OF BALSAMIC VINEGAR 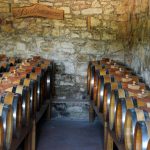 A friend told me she saw it recently and asked if I knew anything about it. I told her it sounds familiar, that I think it’s the natural color and they add coloring to get the dark stuff.

Wrong. Balsamic vinegar gets its dark color naturally from a very long and involved the aging process.

White Balsamic is aged only one year in uncharred barrels. The vinegar doesn’t caramelize because the grapes are put through a pressurized cooking before going into the barrels. It’s the cheap stuff, lacking in the complex flavors and nobility of the good stuff. But it does have its purpose. Some chefs use it when they don’t want it to color the food with Balsamic vinegar.

True Balsamic vinegar is made from boiled down white Trebbiano and Lambrusco grape pressings that evolve into dark syrup when aged under strict restrictions in Modena or Reggio Emilia in Italy. The really good stuff can run from $150 to $400 for a 3.3 ounce bottle. The good stuff must be aged in a specific way for no less than 12 years. It is found in stores labeled as having been aged 12, 18, or 25 years. The really good stuff might be aged as much as 100 years and won’t be found on many super market shelves.

Talk about royalty – production of balsamic vinegar has been documented as early at 1046.

Production of quality Balsimo begins with quality grapes that are boiled down to about 30 percent of their original volume. The syrup then is fermented in kegs along with added vinegar in a slow aging process to concentrate the flavors. It starts out in the largest of seven barrels and rests there for a couple of years. Evaporation reduces the quantity of the liquid and further concentrates the flavors.

As the liquid concentrates, it is transferred through a succession of seven barrels, each smaller than the previous. None of the liquid may be withdrawn until it has rested in the smallest of the barrels a sufficient number of years. The barrels are made of chestnut, acacia, cherry, oak, mulberry, ash or juniper wood. Each adds its own flavor to the end product.

Pain staking? Labor intensive? Sure. But the sweet, rich, concentrated flavors that come out the end are worth every minute of the processing and every penny you will spend to add it to your shelf. Just a little bit goes a very long way when making your own vinaigrette, or sprinkling it on some roasted vegetables.

When shopping for a good Balsimo, don’t be taken in by a label that reads Aceto Balsamico de Modena. It may well come from Modena, but if the label doesn’t tell you the number of years devoted to processing the vinegar and it doesn’t show the imprint of Denominazione de origine protetta, the European Union’s Protected Designation of Origin, or Aceto Balsamico Tradizionale de Modena, you may want to take a pass. These are commercial grade imitations made of wine vinegar with coloring and thickeners added to mimic the sweetness and texture of the aged Balsimo. Fact is there is no aging involved and hundreds of thousands of gallons can be produced every day.