TRUTH & HONESTY AT THE FISH MARKETS / but what about the restaurants 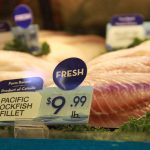 You know the red snapper you’ve been bringing home from the market for years, the snapper Veracruz you ordered in the local Mexican restaurant?

Well, it probably wasn’t red snapper at all. If you live on the west coast and eat fish from local waters it was actually rockfish. And the Chilean sea bass? Nope. It’s Patagonian tooth fish and has little if anything to do with Chili.

Real red snapper is caught in Atlantic waters. What’s caught on the Pacific coast is one of 14 varieties of rockfish. But until recently the fish in market display cases on the west coast was labeled red snapper. Some marketing maven probably decided years ago that red snapper was a more commercially attractive name.

Just think, all these years I passed on this fish because I don’t really care for snapper. Then, several months ago, I noted red snapper no longer had a place in the fish case at my favorite market. Instead there appeared something “new” labeled rockfish. My eye recognized is as the same fish but the amount of display space devoted to it had shrunk from robust to almost nonexistent.

I asked the counterman what happened. He told me it was the same fish they always sold; it just was re-labeled. He didn’t seem to know why and he didn’t seem to want to talk about it. He did say sales had plummeted since the change.

I’ve always liked rockfish, so I went home with a pound and turned it into a delicious ceviche.

I visited several other stores in preparing this article. Most no longer offer red snapper and have relabeled it rockfish, or Pacific rockfish.

About the same time, I noticed markets no longer were selling Chilean sea bass. At Gelson’s it now says just “sea bass” with “Patagonian tooth fish” in parenthesis below it. I’ve known for some time that there is no such thing as Chilean sea bass. It’s another triumph of marketing. What essentially is a junk fish was given a fancy name and put on menus as if it were something really special at prices to match.

Back to the snapper for a minute. I asked the chef at one of my regular sushi restaurants if the red snapper they served was really rockfish. He told me “it’s Japanese snapper.” So, I asked if it is actually alfonsino. He said it’s “sea bream.” At another of my favorite sushi restaurants there is alfonsino on the menu. Ask what it is and you’ll be told, “It’s like Japanese snapper.” But it actually is a whole separate fish. Other names under which alfonsino is marketed include red bream and Tasmanian snapper. Whatever it’s called, it’s delicious, better that Japanese snapper.

OK. Now I was curious. So I started a tour of seafood counters and I phoned representatives for a few market chains.

At Whole Foods I found no red snapper in the case and a small sign that says they only carry selected species of rockfish on occasion. The sign advises that because certain species are either overfished, caught in ways that are harmful to other species, or are in low abundance the market does not carry those fish. These include Atlantic halibut, octopus, skate wing, sturgeon and turbot. No imported shrimp are sold and the market will carry swordfish or tuna caught only in certain areas.  Ralphs has changed the labeling to rockfish, and doesn’t offer red snapper. Alaskan cod fish is on display but no black cod. All salmon is labeled “farm raised” and “color added”, but there is no wild caught salmon available. The source of all fish in the case is labeled for its source.

Costco no longer offers red snapper; it now is labeled correctly as rockfish. But they sell Pacific halibut, without reference to whether it’s from the chilled waters of the Pacific Northwest or the warmer southern waters.

Halibut from southern waters isn’t halibut at all. It now is sold in many places as flounder, but it really is fluke. (Take that, all you people who thought I was crazy all these years when I said I liked Alaskan halibut but not the local halibut. You told me there was no difference. Ha.) And, by the way, this flounder is nothing like the flounder you’ll find in fish markets and restaurants along the northeast Atlantic coast.

Then there’s black cod. The US Food and Drug Administration says sablefish is the acceptable market name for this oily fish that is so popular, when served baked at Japanese restaurants. The FDA says, ‘black cod is considered a vernacular (regional) name and should not be used as a Statement of Identity for this species.” Try a real Jewish deli and you might find this fish smoked and offered as sable alongside the lox and smoked cod fish and white fish. In Canada it’s sold as blue cod, coalfish, beshow, or skil fish; in the UK it’s bluefish, candlefish, or coalfish. In sushi restaurants, however, it’s still black cod.

None of the markets I visited has anything on display labeled black cod any longer.

When I first noticed the changes in market display cases, I thought some regulatory agency had stepped in. But I wondered why the same rules didn’t seem to apply in restaurants, where the same old fish is being offered under the same old names.

With a little probing, I found it has nothing to do with government regulations. Fish stores and super markets simply have been gripped by a wave of responsibility. Heavy news coverage of large-scale fraud in the labeling of fish in restaurants may have provided the impetus, but the fact is those markets that are changing the labels to more accurately describe the fish on sale are doing so voluntarily. Honesty, accuracy and truth (and a desire to avoid further bad publicity) are trumping marketing. It’s a victory for investigative journalism.

Back in 2003 a California state assemblymember named Lloyd Levine (my son) introduced legislation to require stores to label farm raised salmon and describe it as having artificial color added. The bill went nowhere. But its introduction led to a cultural change in the marketing of salmon. Soon after that bill failed, Gelson’s voluntarily started to designate which of the salmon on sale is farm raised and which is wild caught. They now do that with all the fish on offer – fin fish as well as shell fish. They label fish as wild caught or farm-raised, previously frozen or not, and where it is caught.

Most of the other markets I visited have followed suit. To a discerning consumer it can be very helpful to know the origins of the shrimp on offer. I’ve learned which I like and which I won’t buy anymore.

It remains to be seen if rockfish reaches the popularity it had under the name of red snapper and restaurants offer rockfish Veracruz. But I doubt we’ll ever see restaurants telling us the shrimp is from Indonesia, or Mexico, or Thailand, or whether it’s wild caught or farm raised.

Most of what we’ve read of late regarding the mislabeling of sea food has focused on sushi restaurants, where diners have ordered expensive cuts of fish and been served lower priced alternatives at the same price. In most cases it would take a true sushi connoisseur to know the difference. Can the average sushi eater spot the difference between red snapper and tilapia? Doesn’t yellow tail look much like several other white fish when cut into bite-sized morsels? How many people can tell the difference between farm raised Atlantic salmon and real Alaskan king salmon?

The only defenses left to the lonely diner are: 1) find a totally trust-worthy sushi restaurant, which probably means the more expensive ones; 2) get to know your sushi chef, chat with him or her about where each particular fish comes from and trust that they won’t outright lie; 3) become educated about the fish you are ordering so you can see or taste the difference; or 4) hope government regulatory agencies and investigative journalists frighten the restaurants into behaving responsibly.

(Here’s an interesting footnote. In researching this article I spoke with staff at several markets and with representatives in the corporate offices of several market chains. None of them wanted to be quoted by name, or even identified as just a spokesperson. They didn’t want it to be known I had spoken with someone from their operation. One told me, “We’re trying to do the right thing. But we don’t want to call attention to ourselves. We don’t need a bunch of pickets out front with signs asking why we didn’t do this sooner.”)