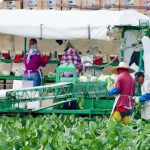 Open a newspaper, turn on the radio, listen to talk shows on the left or right and the subject of immigration reform is everywhere.

To some the discussion is driven by a desire to achieve justice and a better life for those who came here seeking that better life. To some it’s a matter of narrow demagoguery. For still others it’s a sincerely held view that those who came here illegally ought not be allowed to remain here. And then there are those who just don’t have the intellectual capacity to think past the sloganeering.

For “a nation of immigrants” the great melting pot of America has a spotty history with immigration. What we face today is no different than what is written throughout a long and sometimes ugly past.

Ben Franklin wrote pamphlets advocating that Germans be kept out of Pennsylvania. “Soon, we’ll all be speaking German,” he wrote. “They will Germanize America before we Americanize them.”

In the 1880s the Know-Nothing Party sprung up out of a nativism that had been growing since the mid-1840s in reaction to massive immigration, much of it by Irish and Germans. Actually called the American Party it became known as the Know-Nothing Party because members answered, “I know nothing” when asked about the exclusive, native-Protestant orientation of the organization. It was an anti-foreign, anti-Roman Catholic organization. Some 75 years later the American Independent Party blossomed to defend and advocate segregation.

Immigration “reform” in the United States long has been code for “keep them out”. It hasn’t mattered if the immigrants were Irish, German, Catholic, Jewish, Italian, Mexican, Japanese, Chinese, or just about anyone else. There have been vocal groups urging that they be kept out.  Often those shouting the loudest were descendants of the previous group of immigrants and always there were opportunistic politicians ready to carry the banner.

About the only group that didn’t face this were African-Americans. There was a separate kind of hell waiting for them in the U.S. They didn’t immigrate; they didn’t come here willingly to seek a better life as did the other immigrant groups. They were brought here to serve as slave labor and as soon as slavery ended the chant began: “send them back where they came from.”

All of which brings us to today’s debate. There are those who will accept nothing short of sending the estimated 11 million undocumented immigrants packing. Politicians in some states have done everything they can to make immigrants – and anyone who looks like he or she might be an immigrant – unwelcomed, regardless of their legal status. Their rant is, “They are taking jobs away from real Americans.”

The result has been disastrous and promises to get worse. The jobs these immigrants are filling most often are jobs American citizens don’t want. They are jobs for which employers would have to pay higher wages and benefits if they could find U.S. citizens or documented immigrants to fill them.

Imagine the newspaper ad: “Help Wanted – able-bodied men and women for seasonal outdoor work in hot, dusty and sometimes rainy conditions. Hard work. Heavy lifting. Much bending. No benefits. You’ll be dirty by day’s end. Pay as low as we can get away with.”

That has been the mantra not just for agricultural workers, but for construction workers, gardeners, nannies, housekeepers and a plethora of other job categories. What it often means is “Americans won’t take these jobs at what we are willing to pay or under these working conditions.”

Farm labor is difficult and requires skilled workers. Not everyone knows the proper way to cut lettuce without damaging it, or pick fruit that needs special handling to remain attractive enough for the shelf. Not everyone is able to spend an entire day lifting watermelons from ground and tossing them up to waiting hands on the back of a truck. Not everyone wants to spend a day in a dusty field under a bright sun with temperatures hanging around 100 degrees.

Agricultural work is so difficult that it’s hard to hire workers at any price.

Enter the pool of undocumented immigrant labor. For decades they worked the fields to put food on our tables and profits in the pockets of agribusiness, until demagogic politicians decided to build careers on anti-immigrant rhetoric and legislation. The consequence of that legislation has been to make those states inhospitable to documented immigrants as well as the undocumented and to drive out the labor needed to harvest the crops.

An Alabama tomato farmer told the Associated Press last year that she stood to lose $150,000 because only eight of her expected 48 field hands showed up to pick the crop after the state passed anti-immigrant legislation.

A survey of Georgia farmers found more than 11,000 jobs going unfilled as workers left the state in the wake of enactment of anti-immigrant legislation. The President of the Georgia Agribusiness Council estimated the revenues lost to the state’s farmers could top $1 billion and could spiral out of control.

The state’s response was to attempt to recruit probationers for the jobs. But the president of the Georgia Fruit and Vegetable Growers Assn. reported most of the probationers quite after just one day, with many leaving after 30 minutes because the work was so difficult. Some two-thirds of the probationers were gone in a matter of days.

Arizona, another state that has enacted draconian anti-immigrant legislation, has seen more than 17,000 acres taken out of cultivation as farmers faced severe labor shortages.

Tom Nassif, president of Western Growers Association, said, “America could lose its domestic supply of fresh produce and accelerate the flight of farming to Mexico and beyond” as a result of the anti-immigrant fervor. “For every farm worker job that goes, an additional two to three jobs in other industries go with it,” he added.

Even states that have not enacted anti-immigrant laws – states like California and Washington – are suffering because tightening of the national borders has choked off the supply of works and heightened fear among undocumented workers in the U.S.

Add to that the growing number of jobs in agriculture in Mexico, Central America and South America and the overall growth of the Mexican economy and U.S. agriculture faces a daunting future. The U.S. currently imports 60 percent of its fruits and nuts, about 25 percent from Mexico and the rest from Chile, Costa Rica and China. Mexico accounts for about 70 percent of the fresh vegetables imported into the U.S. If the labor can’t or won’t come to the jobs in the U.S., then the jobs will go to where the workers live.

For American consumers the future seems to hold higher prices. The so-called guest worker program being proposed by some politicians might be a solution of sorts. But at what price? While undocumented immigrants represented cheap labor for American farmers for nearly a century, permitted guest workers would be protected by U.S. labor laws. That means higher wages and more benefits and they no longer would be cheap labor.

The incentive to hire undocumented workers who might work for less would still exist. But with the borders locked down, rampant anti-immigrant legislation spreading, and more plentiful jobs available in their home countries, what incentive would there be for that cheap labor to come north.

For American farmers, who are looking at their possible extinction, the option of higher wages and benefits to attract immigrant labor might be attractive. After all, those costs will be passed along to consumers.

So that is the choice that seems to loom on the horizon for American shoppers: more expensive domestically grown produce, or less expensive produce brought into the country from the south until the day arrives when the words “grown in California” or “grown in the U.S.” vanish from our markets.