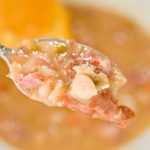 I first tasted each of these dishes when dad and I visited the Automat frequently in the 1940s. I would put a nickel in a slot, open the glass door and out would come a portion of soup or beans. They were hot so dad removed the bowls for me. To this day I love each of these dishes and never eat them without remembering those visits to the Automat with dad. Of course, I can’t be sure now if I loved the soup and beans, or if it was just the concept of putting a nickel in a slot and getting food.

Joseph Horn and Frank Hardart opened their first restaurant together in Philadelphia just before Christmas in 1888. Ten years later they incorporated as Horn & Hardart Baking Company. They opened the first Automat in the U.S. in Philadelphia in 1902. The New York restaurant opened in 1912.

I remember an entire wall of little glass doors. The food in each compartment could be seen through the glass. As a customer removed a food item and closed the door, a kitchen worker would replace the sandwich, cup, bowl, or plate.

In the early years the slots took nickels only. As more items were added and the costs increased, the slots were converted to accept dimes, then quarters. More expensive items required multiple coins. In time the New York restaurant added a steam table that offered a variety of hot dishes.

As the decades ticked by and fast food restaurants continued to spring up, the Automats started to close. The last one in Manhattan – at the corner of 42nd Street and 3rd Avenue – closed in 1991. The name Horn & Hardart turned up on coffee shops and other failed ventures in New Jersey and Pennsylvania until 2005, when the last one closed.

The Manhattan Automat served not just those looking for a quick and cheap meal. It was a popular hangout for song writers, play writers and newspaper columnists.

I have a modest collection of recipes from some of the old New York and L.A. restaurants that have long since closed. But I’ve never been able to track down any of the old Automat recipes. So, when I make Navy bean soup at home, it’s of my own creation. Is it as good as what we used to get at the Automat? I have no idea. It’s good – very good. But too many years have gone by to allow a comparison. Besides, what difference does it make, as long as it’s good and we enjoy it. I know my dad would have if he had lived long enough to try it.

NAVY BEAN SOUP
1 lb. dried Navy beans (substitute great northerns if you wish)
Water
1 large, meaty smoked ham shank
3 medium russet potatoes, peeled and diced
1 large onion, chopped
1 cup diced celery
1 cup diced carrot
2 cloves garlic, minced
Salt and pepper to taste
Soak the beans overnight in 2 quarts of water. The next day add 2 more quarts of water and the ham shank. Cover the pot; bring the water to a boil; reduce the heat and simmer for 2 hours. Add the potatoes, onions, celery, carrot and garlic. Simmer an additional hour. Remove the ham shank from the pot and set it aside to cool. Put the pot of soup in the refrigerator overnight so the fat will congeal and can be skimmed off easily. Strip the meat from the ham shank, cover it with plastic wrap and refrigerate.
Here’s where you have some choices. After skimming the fat from the soup you can run the soup through a folley grill, put it in a blender, or use an immersion blender to  turn the whole thing into a nice thick liquidy soup, or you can remove some of the beans, liquify the rest, then return the beans to the pot. Return the ham to the pot. Heat the whole thing and you’re ready to serve. Just add salt and pepper to taste. The ham will have given it saltiness to the soup, so you may not need to add any.
This makes about 4 quarts of soup. It can be frozen in individual portions.