A BRATWURST BY ANY OTHER NAME IS STILL A SAUSAGE 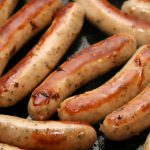 Stop at 40 sausage shops in Germany and ask for bratwurst; there’s a good chance you could get 40 different sausages.

That’s right. Bratwurst is not a name of a specific sausage. “Brat” is German for chopped meat and “wurst” is German for sausage. So, if you asked for bratwurst you might get beef, pork, or veal. You also could get chicken, turkey, lamb, buffalo, or any other chopped meat product. No matter what it says on the menu boards of sports stadia throughout the U.S., it turns out bratwurst is the generic name for so many things that you can never be certain what you are getting unless you ask someone who happens to know the answer. It’s the name of a thing, a type of food, not of a particular food.

Now, I never knew any of this until I was having lunch one day at Brats Brothers Gourmet Sausage Grill in Sherman Oaks, CA and I asked the owner why the extensive menu didn’t list anything called bratwurst. The word appears only at the top of a menu page, above a listing of an impressive array of different types of sausages.

Brats Brothers probably isn’t the only sausage restaurant or market that adheres to this strict definition. But too many, even some very well-known ones, don’t. Wrustkuche, with locations in downtown L.A. and Venice (California, not Italy) offers Bratwurst on the menu and defines it as “fine cuts of pork, coriander & nutmeg.” All technically correct but a bit deceptive. They single that out as a bratwurst when just about every other sausage on the menu also is a bratwurst. They are playing to an ill-informed consumer.

Through the years I’ve seen bratwurst offered for sale at sports arenas, barbeque restaurants, beer joints and other places. I’d order one on occasion but never became a fan. Now I know why. It’s because I was not necessarily being served the same thing each time. Bratwurst often is Americanized slang for “whatever sausage we happen to have today.” The latest unfortunate experience was at a restaurant called Seahawk 12 at Seattle Airport, where Beer Bratwurst means a very dry, under-sized sausage topped with tasteless sauerkraut.

The first historically documented reference to bratwurst stems from Germany in 1313. Today, recipes for sausage in Germany vary by region and even by locality within a region. How they are served also can vary from place to place. One constant, however, is that they should never be served on a hot dog bun, only on a crusty roll. Most regions serve some kind of mustard with the sausage. Sauerkraut and/or potato salad are frequently served as a topping and a side throughout Germany and the U.S..

Most often in Germany sausages are grilled. Americans have bastardized the whole thing by boiling hot dogs and even Polish sausages in water, or by steaming them. It’s less labor-intensive; masses of sausages can be cooked ahead of time and kept hot in water rather than having to be grilled to order individually. Then there are the ball parks where they boil them and then toss them on a grill for a couple of minutes to try to fool us into thinking we’re getting grilled dogs

Not only will the kind of meat used in the bratwurst vary from area to area throughout Germany, the size and shape of the sausage will change, too.

In Nuremberg, where sausages were first documented 700 years ago, the sausages are small – only about 3 inches long – and very thin. On the other hand, the Frankische sausage can run as much as 8 inches long. Sausages in this area date back to 1573, are seasoned with marjoram and served without mustard. Tradition calls for these sausages to be grilled over beech wood.

Sausages from the city of Coburg are even longer, are seasoned with salt, pepper, nutmeg and lemon zest and are traditionally grilled over pinecones.

The list goes on: Wurburger Bratwurst, Thuringer Rostbratwust, Nordhessiche Bratwurst, Rote Wurst. Each has its own distinctive mixture of meats and spices; each is served with its own regional assortment of condiments and side dishes; each is cooked according to local tradition. But each is a bratwurst.

In Britain they call them bangers and serve them with mashed potatoes. But they still are sausages made with chopped pork or beef. Among the many varieties of sausage in Finland is mustamakkara – black sausage, which is prepared with blood and is similar to the black pudding served in Scotland. Italian sausages are laced with fennel seeds and come either hot or sweet.

In Iceland you can expect to find lamb added to sausages for a distinctive taste. You also may find horse sausage, mutton sausage and liver sausage. A look at an American super market shelf would lead one to think all Polish kielbasa is the same. Actually it comes in eight varieties, depending on the region in which it is produced. In Portugal and Brazil you’ll find linguica made of hashed meat and seasoned with a wide range of herbs and spices.

Mexico and some of the South American countries give us chorizo. The Dutch offer up rookworst – smoked sausage, slagersworst – “butcher’s meat” sausage, and several other varieties.

You can travel through most of the world and find an almost endless variety of local sausages. In Anchorage, Alaska I ate reindeer sausage. While sausages are not a mainstay in Japanese cooking, fish sausages are available as snack food. Various regions of China turnout multiple varieties of sausage, often pork based.

When it comes to things like the French saucisson, however, we’re talking sausage, but not bratwurst because the meat is cured and dried but not chopped. Same in Bulgaria, where lukanka is a spicy salami sausage. There are hundreds, perhaps even thousands, of cured meat sausages. Some Italian salumi, or salami from any place in the world is a sausage, but the meat isn’t chopped. So, not a bratwurst.

Which brings us to the shores of the U.S. of A., where they can be called links, hot links, hot dogs, foot-longs, wieners, franks, dogs, pigs in a blanket, knocks, or a number of other things. Louisiana is famous for Andouilles, which derived from France. Visit virtually any part of the country and you’ll find an almost inexhaustible array of regional and local variations. Whatever they’re called, they all come from the same place: wiener is an Americanized version of wienerwurst, which means wiener of Vienna. In other words, they’re all sausages.

The reputed hot bed for bratwurst in the U.S. is Wisconsin, where so much of the population is descended from German immigrants and culture has done the rest. Sheboygan, Wisconsin calls itself “The Bratwurst Capitol of the World.” However, Bucyrus, Ohio calls itself the “Bratwurst Capital of America.” And Madison, Wisconsin hosts the “world’s largest bratwurst festival” every Memorial Day weekend. Miller Park in Milwaukee, Wisconsin is the only major league baseball stadium that sells more bratwurst than hot dogs. But it’s sold as just that – bratwurst – with no further definition.

The Madison WI Bratfest is run by sausage maker Johnsonville. The festival web site touts brats, but doesn’t say what kind. The Johnsonville web site lists a number of different kinds of brats, including “Original Brat”, whatever that might be. So, if I wanted to order true Wisconsin brats online, I wouldn’t do it, at least not from Johnsonville, which also runs the Sheboygan festival. Could it be that even the Germanic rooted residents of Wisconsin have become so Americanized that they’ll accept a brat and not ask or care what kind?

The Bucyrus OH Brat Festival serves some 27 tons of sausages during three days each August. This festival features a number of local butchers, each of whom produce sausages from their own recipes. The event evolved from a local tradition in which butcher shops would set up sidewalk vending stands to sell their own unique sausages.    I think, by now, you get the point? Chopped meat is a brat; dress it up with herbs and spices and it becomes wurst, or sausage. Stuffed into a casing, or served as a patty with eggs for breakfast, it’s still a sausage. So, if you step up to the counter at the ballpark or hot dog stand and the menu board lists Bratwurst, it’s probably a good idea to ask, “What kind?” And it’s a good bet the server may not know. At places like Brats Brother and other high-quality sausage restaurants, you won’t have to guess; it’s right there on the menu.