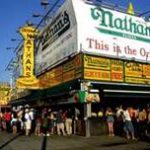 They are my old haunts, the neighborhoods that form the memories of my youth and draw me back whenever we visit New York. Then they were parks and playgrounds and restaurants. Now they are scenes of devastation that have come to me as TV images of the terrible work of Super Storm Sandy.

While Sandy was ripping apart the east coast and in the weeks of recovery that followed, I communicated with friends and relatives to make sure they were OK; I watched news coverage of water flooding streets and subway stations where I have walked; I saw fires reduce neighborhoods to rubble.

Although we moved from Brooklyn in 1949, a part of me never really left. So, from this distant outpost on the west coast, I pay attention to what is going on in the place of my roots.

Make no mistake, I am a Los Angeleno through and through. This is where I live, where I belong and the place to which I will return no matter where I might roam.

But growing up in Brooklyn in the 1940s was a definition of freedom; it runs in my blood and is an indelible part of who I am. In a time before gangs, and drugs, and fear of all manner of crime, we were free to roam and learn about life. At the age of 8, we were allowed to go to Dodger games at Ebbets Field without adult supervision; we wandered through Prospect Park on our own; we played baseball in the court yards between apartment buildings and at Lincoln Terrace Park until sunset.

My parents spent significant portions of their pre-marital years in the nightclubs and theaters of Manhattan and made sure those too were part of my pre-teen exposure.

All this is at the core of what I feel when terrorists attack the city of my birth, bureaucrats force Tavern On The Green out of business and Super Storm Sandy wreaks its havoc. I know it seems untoward to include a restaurant closure alongside great human tragedies. But restaurants are part of the fiber and fabric of life in New York. The closing of another Jewish deli is fuel for newspaper articles and sorrowful letters to the editor just as surely as are stories of struggle in the wake of the great storm.

Here’s an example: we moved west in 1949; our first return visit was in 1954. On our second day in town my father and I jumped on the subway and headed for Nathan’s Famous at Coney Island. We downed 13 dogs each that day, with mustard and sour kraut. Absurd? Obscene? Of course. But we had five years of catching up to do and who knew when we would be back.

I first tasted pizza on the Boardwalk at Coney Island one hot summer day. We had been on the rides and playing games at the fun zone. Evening was going to take us to Nathan’s for dinner before the nightly fireworks show.

As we walked along, I saw a very small window and a sign that offered “a slice – 5 cents.” I asked what that was and my father bought me a slice – a wedge of thin crusted pizza with tomato sauce and a thick layer of melted cheese. I’ve loved pizza ever since.

The other day, with some idle time on my hands, I looked at the New York Times food section online. There I found a feature about the impact of Super Storm Sandy on the restaurant scene in Brooklyn, with a particular focus on Coney Island.

I learned the storm forced Nathan’s to shut down for the first time since it opened 95 years ago. The food stock and the equipment all went underwater. I hadn’t thought about that as I watched TV images of the heartbreak of lost homes.

Eighty-eight-year-old Totonno’s, the place that brought pizza to New York and popularized it at Coney Island, is shuttered – knocked into submission by Sandy’s might.

Nathan’s and Totonno’s aren’t the only Coney Island restaurant victims. The wreckage is everywhere. So is the pain.

The financial loss to the owners of restaurants and other businesses will not be totaled for months. The loss of tourism revenue in the coming summer season will go far beyond the restaurants. It will hit the chain restaurants hard, and the impact on the lives of the owners of smaller, independent food stands will be devastating.

But Nathan’s management is promising to have the restaurant re-opened in the spring of 2013. Totonno’s came back after a fire in 2009 and the owners have vowed to come back again now.

The spirit behind those promises is the spirit that runs deep in New York. The city that came back after 9/11 will come back from Sandy. In New York treasured old restaurants fight to stay alive in ordinary times and fight to come back after disaster. And when one of them loses the fight, New Yorkers shed a tear, carry on and carry with them the memory of an old friend that fed them well.

I know the day will come – hopefully soon – when I once again will stand at the counter at the corner of Surf Avenue and Stillwell Avenue. I’ll order a dog with mustard and kraut, maybe a second one, but not 13 of them. And I’ll have a side of those thick cut fries. And I’ll smile at the memory of those long ago days when I stood at this very same spot as a boy with his father. And I’ll feel the pride of knowing New Yorkers survive and I am still a New Yorker.