MEXICAN COOKS TELL AMERICAN RANCHERS: GO SUCK AN EGG / whatever became of the flavor in our eggs? 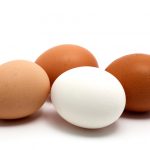 Remember the times you’ve told friends you were heading for a vacation in Mexico? It’s a good bet at least one of them told you, “Don’t drink the water.”

Now the shoe is on the other foot. For months Mexican cooks have been looking at cartons of eggs from the U.S. and saying, “Don’t eat the huevos.”

It’s happening even as Mexico struggles with an egg shortage in the wake of an avian flu attack that all but wiped out the nation’s egg laying chickens this past summer. They would rather substitute vegetables for the eggs traditionally used in huevos rancheros.

The average Mexican eats between 350 and 400 eggs a year, more per person than the population of any other nation. In the U.S. it’s 263 eggs per person per year. As for Mexico, think huevos rancheros, scrambled eggs with pork rinds, eggs with beans, eggs with green chilies, green beans with eggs, eggs with tomato sauce, eggs with salsa. And that’s just breakfast. Mexican households often rely on eggs for protein because meat can be prohibitively expensive.

In the months after the flu hit Mexico’s chickens in June some 8 million hens died. Another 11 million were slaughtered to prevent the spread of the disease. Eventually that number climbed to about 20 million. The result is a national egg shortage; wholesale egg prices doubled; retail prices tripled; eggs vanished from the kitchens of low income families; rationing of eggs hit some neighborhoods; hoarding, price gouging, and long lines became expected at markets where eggs were available.

Mexico lifted tariffs to encourage imports from Chile, Columbia, Costa Rica and the U.S. Ninety tons of eggs were sent to Mexico from the U.S. early on. Another 600 tons moved across the border later. The U.S. also provided millions of replacement hens for ranches in Mexico.

Yet, in the face of all this, Mexican vendors ran into problems when they tried to sell the U.S. eggs. Chefs and household cooks complained the eggs didn’t have any flavor and the yolks were too pale.

Which leads us to a study published in August 2010 by The Food Lab at Serious Eats. They set out to “determine eggs-acctly which factors can or can’t affect the flavor of eggs. Does organic or gage-free make a difference? What about omega-3’s or access to pasture?” How do plain old factory farmed eggs stack up against organic cage free eggs with or without omega-3 fatty acid, or organic eggs from free-roaming, pasture-raised hens?

I love eggs and this study seemed to promise answers to questions that have confounded me for years. There was a long time in my life when I ate about two dozen eggs a week. After I got my first cholesterol warning 24 years ago, I cut back to about two eggs a week. That didn’t lessen my appreciation for the deep, rich flavor of a really great egg. If I was going to limit my egg consumption, then I wanted every egg to be the best possible. Lots of luck.

There are certain realities about my personal perspective on eggs: 1) the longer an egg is cooked, the less flavor it has; 2) all the flavor in an egg is in the yolk, so don’t ask if I want egg whites; 3) three-minute eggs are over-cooked; 4) the best tasting egg is a raw egg; 5) an egg poached very, very soft is second best; and 6) a Cesar salad without a real raw egg isn’t worth the bother.

Through the years it has become more and more difficult to find the kind of eggs I grew up loving. So, I approached The Food Lab study with the hope and egg-spectation that it would unlock the secret: what eggs should I buy to get the taste I want consistently.

For many years I believed the single biggest factor in determining the flavor of an egg was what the chicken was fed and the freshness of the egg. Eggs from chickens fed commercial and synthetic feed couldn’t possibly be as good as eggs from chickens that foraged in the field for grains and proteins, could they?

I have shunned eggs from the big commercial ranches because ranchers are driven by the profit motive. They don’t want their chickens to become sick. They just want them to lay a lot of eggs. Feed that increases quantity is better than feed that enhances quality.

But wait. Wouldn’t free range chickens eat an unpredictable diet that would make the quality of their eggs unpredictable?

The Food Lab study assembled a panel of eight tasters. The methodology of the testing seemed solid. And the result of the first test was just what I wanted: “For the best tasting eggs, go for pastured chickens. Barring those, choose whichever eggs have the highest levels of omega-3 fatty acids. Where flavor is concerned, it doesn’t matter if the eggs are organic, cage free, or even from a cage battery.”

I had my answer: head on out and buy some eggs from pastured chickens with high levels of omega-3 fatty acids. Problem solved. And do it at a farmer’s market because freshness is important. Isn’t it?

Unfortunately, the study didn’t end there. Someone noticed that the eggs selected as best were the ones that had the yellowest yolks.

That led to a few more rounds of testing, with controls for the coloration factor. The results were startling: the color of the yolk and the appearance of the egg mean more than whether the chicken is raised in a pasture or in a cage, fed an artificial diet or left to peck at the barnyard ground, or has high levels of omega-3 or none. And as for freshness, this affects texture than taste.

Taste, it turns out, is in the tongue of the taster. The mindset of the taster, created by the color of the yolk, was the only consistent determinant in which eggs were considered the best.

Now, if the folks at The Food Lab could just figure out how to make me believe all that the next time I poach a couple of eggs that are just OK, but not great … or if they could egg-splain it to all those cooks and chefs in Mexico who won’t buy eggs from the U.S.

Imagine the humiliation of America’s egg ranchers when they are told people in Mexico won’t buy their eggs. Fortunately for those ranchers, American consumers don’t seem to be as discerning.