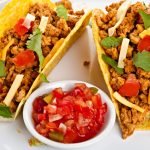 You don’t know how good you have it – a phrase customarily reserved for the walking-to-school-in-the-snow saga. Or for grumbling about the primitive old days of one coffee flavor, three channels and no ringtone options.

You know. Those dark ages before we figured out how to repurpose, speak volumes, reach whole new levels, bundle and LOL.

And while there may have been some advantages to simpler times, food variety and dining options – especially ethnic dishes – were not among them.

If you’re my age, no one need remind you of the dining panorama of your youth. For the rest, return with us now to those thrilling days of yesteryear. Canned cream of tomato soup rides again. With its faithful companion: Melba toast.

Step back to the time when daring and resourceful homemakers were serving up hearty Underwood Deviled Ham sandwiches on enriched white bread, beef and corn casseroles, maraschino cherry cakes. Or was it Swanson TV dinners and Tang?

Whatever was on your table, the closest thing to south of the border fare was probably a Chiquita banana. Or Brazil nuts. Or Lima beans, the pride of Peru.

Mulitas and tortas? Dream on.

Tramping home in the snow, if you were craving “Mexican” food, you probably were picturing pimiento cheese sandwiches, chili from a can, Spanish rice from a box mix, or even Spanish omelets.

OK, Spain is not Mexico. But none of the foods listed above are really Mexican either.

All of this comes to mind as I imagine the mute astonishment of the antediluvian canned-chili eaters if they magically found themselves in 2012, standing in front of Chando’s Tacos on Arden Way in Sacramento.

Upon regaining their power of speech, a recovery promoted by a couple Chando’s fish tacos or a chicken mulita, you can also imagine them saying, “You don’t know how good you have it.”

And they’d be correct.

A few minutes east of Del Paso Boulevard, Lisandro Madrigal has created a street food stand about which previous Sacramento generations could only dream. Indeed, it was a Madrigal family dream that prompted the first step toward Chando’s.

From Chando’s Tacos website: “Our father dreamt and built his Tortillera, ‘Familia Madrigal’ in Tijuana, Mexico during the 1990′s. We worked hard to craft an authentic corn tortilla. Tortillas are the shell of a good taco. Chando’s Tacos uses the same quality ingredients to create your ‘authentic taco’ experience.”

And while the tortillas are special, they are only part of the experience. It’s the meats, marinades and grilling techniques that set Chando’s food apart.

First: the set-up. Walk to the window. Order your food. Then find one of the picnic tables on the side of the stand, or in the tented area in the back, while you wait for the friendly window attendant to call your name.

It’s as informal as it gets. And delicious. And affordable.

The carne asada is steak marinated in spices and citrus. Birria, commonly made with goat meat, is a spicy beef stew in “Mom’s Multi-Chile Pod Sauce.” The chicken is marinated in achiote spices. There is also adobada, carnitas, and fish – citrus-marinated tilapia, grilled not fried).

All the options are mild and full-flavored. Ask for the spicy salsa if you need to climb further up the Scoville heat scale.

Rather than describing each one, I’d recommend you try them all. That’s what we did. My favorites are the tacos and mulitas filled with chicken or adobada.

It won’t take you many return trips to figure out what Chando’s regulars know by heart: these are not your father’s tacos, though they may have been Madrigal’s father’s.

No Americanized twist on south of the border, these are the real thing. Tacos good enough for the pickiest eaters to admit they know we have it good.