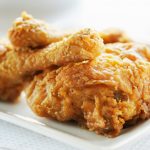 Or I didn’t fry. I gave up deep frying many years ago. I never could figure out what to do with all that used cooking oil.

I didn’t grill either. I don’t like the mess of cleaning up after. I’ll eat grilled food in a restaurant, where the cleanup is someone else’s job. I don’t own a barbecue.

Then, a few weeks ago, I did both in the same week; I fried and I grilled. Was I out in the sun too long? Was I getting bored? Had I run out of creativity? Was I giving in to a long dormant love of fried chicken? Or was it just that it was summertime?

An internet search for fried chicken recipes yielded nothing. They all require deep fryers. And none of them said anything about removing the skin from the chicken before cooking.

To change the menu was not an option. I had a craving and I was committed to it. I was going to have to wing it. Fake it. Use my instincts. Make believe I’m competing on Chopped.

STOVETOP FRIED CHICKEN
I stripped the skin from a few chicken thighs and trimmed away the fat. I poured some milk in a bowl; broke an egg into another bowl and whipped it a little, and I put some flour on a plate and seasoned it with fresh black pepper. I heated about one-quarter cup of olive oil in a frying pan – just plain olive oil, not extra virgin, which won’t get to a high enough heat.

When the oil was good and hot, I put the thighs in the frying pan and watch the spatter fly in every direction. After about ten minutes I tipped the thighs up with a fork to see how the underside was doing. I checked again every few minutes until I had a nice, golden crust on that side. Then I turned the thighs over and did the same thing with the other side. This side didn’t take as long to look right. I served the thighs with a sweet potato for me and a yam for Jennifer.

Go figure. My first attempt at fried chicken was a success. I had to wipe up the oil that had spattered on the stove top, counter, floor and my glasses. But I had only a little bit of oil left in the pan and it went easily down the drain with a chaser of very hot water.

STOVETOP GRILLED SHRIMP
Inspired by that success, I decided I would move on to grilled shrimp. The only grill I own is a cast iron, stovetop one. I had used it before to grill bread and chicken thighs. Never any beef, fish or other meat. I’m not even sure why I used it for chicken, except I thought it would be neat to see grill marks.

Cleaning the thing after using it for anything but toast points is a challenge. I’m very particular about my cast iron cookware, of which the grill is the only piece left. The rest lost the battle to rust a long time ago.

I know if you cook shrimp too long it will get rubbery and dry. But how long is too long on a stovetop, cast iron grill? I let my eyes be the judge and they lied to me. Overcooked. Not disastrously, but enough. I made a salsa of chopped tomatoes and onions to serve with an ear of corn on the cob and five shrimp per person.

Will I do either of these things again. The chicken – maybe some time when my cardiologist is out of town, but probably not. The shrimp – no.

Truth be told, I have no reason to do either now that I’ve tried them. I have an old recipe for “oven fried chicken”. It doesn’t use all of that oil and it’s baked instead of fried. I do excellent sautéed shrimp in a frying pan, far better than the ones I grilled. And I don’t have a cast iron, stovetop grill to clean after.

Season the chicken with salt and pepper to taste. Place the chicken in a large baking dish. Bake at 350 degrees for 30 minutes. Melt the butter in a small saucepan. Stir in the garlic, chili powder, cumin and paprika. Heat for 2 minutes. Add the lemon juice. Set aside in a warm spot, but not on the heat. Place potato wedges around the chicken pieces. Brush the chicken pieces and potato wedges with the melted butter sauce. Return to the oven and continue baking 30 to 40 minutes, until chicken and potatoes are tender, brushing both occasionally with more butter sauce and drippings. Place the chicken and potatoes on a serving platter and garnish with lemon slices.

* This is much healthier if the skin is removed from the chicken before cooking. But you won’t get that golden crisp skin.