THE GREAT CANNED TUNA HEIST / robbery at the checkout stand, outrage in the courts 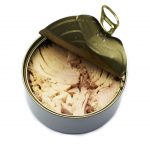 Why would three different companies take the risk of cheating their customers?

Because they think they can get away with it, and most of the time they probably do. Because it will increase their profits. Because if they get caught they know the penalty won’t hurt and won’t even come out of their pockets.

That’s the story of the companies that sell Bumble Bee Tuna, StarKist Tuna, and Chicken of the Sea Tuna.

For an unknown number of years they sold what may have been millions of cans of tuna that did not meet federal standards for how much tuna was supposed to be in the can. That was the allegation in a law suit filed by three California district attorneys.

The result: the companies “settled” without admitting guilt. Their spokespeople claim the standards are old and out of date and need revising and they will work with the Federal Food and Drug Administration to update the standards. As part of the settlement, the companies were not found liable for any violations.

The settlement: $300,000 worth of canned tuna to be distributed to food banks, $965,500 to each of the three counties – San Diego, Riverside and Marin – to cover the cost of the investigation and litigation, and $86,000 to the California Food and Agriculture Department for the cost of investigation.

$3 million dollars. No one will ever know how many customers were bilked out of how much money. But we do know that any extra profits above the $3 million “settlement” went into the companies’ bottom lines to reward their corporate executives.

And the real outrage: costs of the settlement will be deducted from operating expenses before taxes. The losers are not the companies, but the same taxpayers who were shorted at the cash register.

Is this a new problem? No way. There was a time when the butcher’s thumb on the scale was an issue. There have been numerous cases of gasoline pumps being jimmied to charge for gas not delivered. That’s why we have a Bureau of Weights and Measures to catch cheaters. Construction companies use poor quality or insufficient amounts of concrete in building subway tunnels and parking structures and get hired later for other projects. And through it all American industry demands less regulation and claims over-regulation is costing jobs.

We have to face the fact that American business will cheat and steal from consumers and customers as long as there are no real costs for getting caught. And the only penalty that will ever truly be effective will be to put the company out of business and put the executives in prison.

In the meantime, what can you do about it? You can’t buy a scale and take the time to weigh the contents of every can, or piece of meat, or bunch of carrots you buy. And you shouldn’t have to. But you can stop voting for politicians who rail against “over-regulation”. What they really are saying is stop bothering the thieves disguised as corporate executives, who contribute to their campaigns.