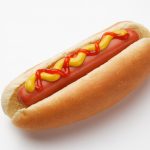 It couldn’t be said that we were close friends. What tied us together were our love of food and journalism; our friendship existed mostly in emails and phone conversations about those two subjects.

We were two guys who dined in many of the finest restaurants in the world. To me it was a hobby and a passion. To the late L.A. Times food writer David Shaw it was a passion and a profession.

Yet, our most enduring conversations were about hot dogs. That’s the subject to which we kept returning.

Last week I become obsessed all over again with the subject of hot dogs as I do the first week of August every year on the anniversary of David’s passing.

Jennifer and I were in Italy in the spring of 2005. Emails were flying back and forth between me and David as we visited some of the restaurants he had recommended and discovered some I needed to share with him. Then there was email silence from him for several days. It was broken by a message in which he told me he had been diagnosed with a brain tumor.

My message back to him was two words: “Oh, shit.”

His reply was even briefer: “Indeed.”

Those were the last words we ever exchanged. He died one month after we returned from Italy. But so many of the words he wrote as a food writer and media critic for the Times live on in my memory.

It all started with a column he wrote about hot dogs. I think it was in about 2001. It was his second major hot dog article, the first having run in the Times’ Sunday Magazine in 1972.

It was an article of faith in our conversations that any town that worships the Dodger Dog wouldn’t know a good hot dog if it met one. Yet, in the 2001 piece he identified three L.A. hot dog joints as his favorites. They were within two miles of each other on Ventura Boulevard in Sherman Oaks and Encino. East to west they were The Weiner Factory and Rubin’s Red Hots in Sherman Oaks and The Stand in Encino.

I immediately fired off an email in which I argued none of them could hold a candle to Nathan’s Coney Island. David accused me of breaking the rules by reaching beyond the circulation area of the Times. But he didn’t argue with my assertion.

As for the L.A. joints, I agreed with David about The Weiner Factory and Rubin’s Red Hots. But I never bought into The Stand as being their equal.

The Weiner Factory closed in early 2008. The property owner terminated the month-to-month lease because he was offered a sweet deal by Pinkberry, which was going to put up a two-story building on the site, with a yogurt shop on the first floor and offices on the second floor. The deal fell apart and the old Weiner Factory building sat boarded up for more than a year. Now there’s a small hoopa bar on the property.

Rubin’s Red Hots closed in 2005 when construction on the reworked 405-101 Freeway interchange chocked off access. It never reopened but the wreck of a building is still there behind a chain link fence.

That left The Stand (http://thestandlink.com) as the only one of David’s choices still standing. So, I stopped by last weekend to check the joint out again, remember David and see if anything had happened to change my opinion of the place.

The kosher dog was very good and the kraut was excellent. It would have met David’s standards, except the bun was soggy and fell apart in my hands. It either had been in a steamer to keep it warm or the steamed dog or the kraut hadn’t been drained sufficiently before it was put in the bun.

The spicy Polish was a total miss. It wasn’t spicy and the casing was tough almost beyond biting. The French roll was neither crisp nor fresh and was too much bread for the sausage.

I left saddened. David would not have enjoyed what just happened. But then, he never got a chance to sample the wares at Brats Brothers, another mile or so east on Ventura Boulevard, with another location on Third Street in West L.A. I think he might have agreed Brats Brothers is turning out excellent hot dogs and sausages on excellent bread and would be a contender for the title of best in L.A. today if there were such a title.

In June the L.A. Weekly revisited David’s 1972 hot dog article and took a look at what became of some of the joints he cited. Here is a link to the Weekly piece (you may need to copy it and paste it): http://blogs.laweekly.com/squidink/2012/06/david_shaw_hot_dogs_los_angeles.php