ON THE MERITS OF MELONS 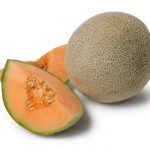 There’s something they do in Italy that rivals the quality of the tomatoes grown there: they grow great cantaloupes.

Is it the water? The soil? The absence of factory farmed, engineered produce? Is it pride of heritage? Is it that consumers would rebel against a loss of quality? Is it all of the above?

Cantaloupe and tomatoes were part of every breakfast at every hotel and restaurant at which we ate during a five-week visit to Italy. Tomatoes were prominent at lunch and dinner also, either fresh or as part of wonderful sauces, or both.

Here at home, however, I’ve given up trying to find cantaloupes worth buying. (We’ll deal with tomatoes later in the year.) For several years, including this one, I’ve picked out a ripe cantaloupe early in the season and been disappointed. Gone is the perfect sweetness I once loved as dessert after dinner. In its place is either a medicinal after-taste or no taste at all. So, I’ve given up; no more cantaloupe until I get back to Italy.

Apparently aware of the issue, U.S. growers came up with something called Tuscan Melons a few years ago. I tried one, hoping the name might represent a commitment to quality. No such thing. The only thing Italian about it was the name.

I’ve even found it difficult to get quality cantaloupes at farmers’ markets.

I was in the super market the other day with some time to spare. I headed for a display of some melons with which I wasn’t familiar. One was marked Golden Kiss Melon; the other was Sugar Kiss Melon.

I hadn’t heard of either of these before this season. So, I lifted a tasting cup from the Golden Kiss display and let the piece of melon slide into my mouth. I chewed and swallowed. Yuck. Talk about medicinal? Almost metallic. The display card said it was a hybrid of galia and charentias, two other melons I never had seen in the market before this season.

Back home I went online to see what I could learn.  Wikipedia says galia is a hybrid itself, a cross between cantaloupe and honeydew, developed in Israel in the 1970. Specialty Produce (http://www.specialtyproduce.com/produce/Charentais_Melon_1371.php) says charentais, also known as French cantaloupe is a low production, farmers market variety of cantaloupe that is not suitable for shipping. This, too, is a relatively new variety of melon, having been developed in France in the 1920s. So Golden Kiss Melon is a hybrid of two other hybrids.

I slid over to the Sugar Kiss Melon display, hoping to purge the taste of the Golden Kiss from my mouth. It was slightly better, kind of like a nearly flavorless cantaloupe.

I quickly stepped to the watermelon display and munched on a couple of taster-size pieces to chase away the taste of the other melons.

Online research regarding Golden Kiss and Sugar Kiss doesn’t turn up much beyond promotional sites belonging to growers and marketers. And I think that’s what these two melons are – testaments to marketing, something to do when you’ve engineered all the flavor out of real cantaloupes.

American consumers seem to be more tolerant, or less prone to protest, than Italians.

My curiosity had been piqued so I did some additional prowling around the produce section to see what other melons were available.

There was something called a Sharlyn melon. Specialty Produce calls that a hybrid of a cantaloupe and a substitute for Crenshaw melons. Crenshaws once were popular in the produce section. They are a hybrid of the casaba and Persian melons. But they haven’t been visible this year.

I was beginning to get the drift. Growers and markets figured out consumers aren’t happy with the cantaloupes they are growing. In the factory-farming rush to grow more and more and more, they eliminated the flavor. While they continue to show cantaloupes for sale, they try to offer bait-and-switch hybrids to those of us who may be more discerning. They hope we’ll fall for the bait for a season and then next season they’ll come up with something else.

No one seemed to know why there are no Casaba melons or Persian melons in my market. Neither is a hybrid of anything else. Maybe there just isn’t enough shelf space because of the need to display all those snazzy hybrids, which probably yield a higher profit.

Cynical? Probably. But with justification?

Now let’s talk about watermelons. When they engineered the pits out of watermelons, they also engineered out the flavor. I still love a nice piece of cold watermelon. But I no longer expect the sweetness that once accompanied the crunch. Many markets no longer carry watermelons with pits. The little bowling ball size watermelons are perfect for our house because I’m the only one who eats watermelon. But if you want the little ones, forget the pits and know you are compromising on flavor. Also gone: a piece of American culture – kids having contests to see who can spit the watermelon pit the furthest.

Let’s finish on an up note with honeydew. I’ve been buying honeydews all summer and they have been terrific. Honeydew is rated as the sweetest of all the melons and this season’s are living up to that rating. They also are the most difficult when it comes to judging the ripeness before you buy and open one. Many summers I have limited my purchases because I couldn’t find enough ripe ones. Not this year. One after another – juicy, sweet and delicious.

But now that I think of it, I don’t recall seeing any honeydew in Italy.