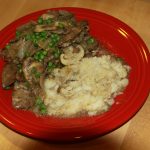 Chickens go “cluck” and ducks go “quack”. Any two year old knows that. Or in the case of my brilliant grand daughter, any 20 month old. But what if you tried to substitute a chicken’s liver for a duck’s as the reality of California’s foie gras deprivation sets in?

It started as a joke. Foie gras was gone from the California culinary world for all of two days when I decided I need a substitute and the substitute would be chicken livers.

I have an old family recipe for chicken livers with mushrooms and onions that I cook once or twice a year. So, two days after the foie gras ban set in I decided we should have that dish for dinner. It’s the closest thing I can get to foie gras without leaving the state. In its original form this recipe included sweetbreads. But I hadn’t ordered them ahead of time and my butcher shop doesn’t carry them regularly.

It’s going to be interesting to see how California chefs adjust to the loss of foie gras. One answer would be chicken liver pate, which would not be very different only in texture from the traditional Jewish appetizer of chopped liver.

When Chicago banned foie gras a few years ago, restaurant owners served things that tasted suspiciously like black market foie gras. Inspectors couldn’t be sure, so no one was fined. The law went unenforced and a year later it was repealed. The future for foie gras in California probably will be a whole lot more complicated.

Foie Gras is a unique delicacy. No other liver that I’ve ever tasted is a true substitute. The ban in California is not actually against foie gras. It’s against the force feeding of ducks to fatten the livers that then appear on menus as foie gras. Once some other way is created to fatten the livers there’s an excellent chance we will celebrate the return of foie gras with the same vigor we recently bid it farewell.

In the meantime, try this.

CHICKEN LIVERS WITH MUSHROOMS AND ONIONS
3 Tblsp olive oil
1 large onion, cut in half and sliced into half rings
½ cup water
½ lb mushrooms, sliced
½ lb chicken livers
1 cup frozen peas
Heat oil over medium-high heat in a large frying pan. Add onions and stir until slightly browned. Add water, reduce heat to medium-low, cover and stew until onion is well-browned. Return heat to medium-high, add mushrooms and stir until mushrooms are browned. Reduce heat to medium. Add the chicken livers and stir together with the onions and mushrooms. Cover and stew in natural juices for 15 minutes, or until livers turn brown on the outside and are cooked through but still pink on the inside. Stir in peas. Cover and let cook about 5 minutes more.

Serves well over steamed white rice or with a side of mashed potatoes with pan juices as sauce.